Since the end of 2015, the chart of gold prices in USD looks like a mirror image to the USD/JPY exchange rate. The often-proposed explanation that both gold and the JPY act as safe haven assets clashes with the fact that the yen – unlike gold - has not proven to be a good store of value over time. We thus believe the reason for the recent high correlation is an entirely different one: The yen and gold have moved closely together because then dollar-yen exchange rate is driven by a similar underlying force as gold: real-interest rates.Since the beginning of 2016, the chart of the USD/JPY exchange rate looks like a mirror image the USD/ XAU rate (see Figure 1). And it is not just the daily chart; intraday the yellow metal and the yen follow each other almost tick for tick. For example, on 15 March 2017, the day of the latest rate hike by the US federal reserve, the yen and gold moved exactly in line (see Figure 2).

Since the beginning of 2016, the chart of the USD/JPY exchange rate looks like a mirror image the USD/ XAU rate (see Figure 1). And it is not just the daily chart; intraday the yellow metal and the yen follow each other almost tick for tick. For example, on 15 March 2017, the day of the latest rate hike by the US federal reserve, the yen and gold moved exactly in line (see Figure 2). 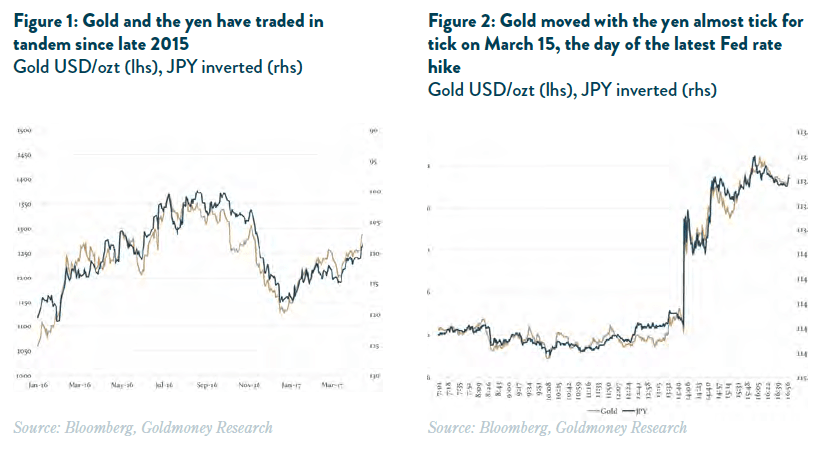 This has led to a whole host of news articles and research reports with all sorts of different conclusions. The most commonly proposed explanation for this high correlation is that both the yen and gold are safe-haven assets. Therefore, so the argument goes, when investors attempt to exit the dollar in search for safety, they buy gold and yen und thus the two move in line with each other. This view was for example proposed in a recent WSJ article: “Gold, Yen, Bonds Gain as Investors Step Up Safety Plays”, April 4, 2017. At first sight, this argument seems reasonable. The yen has outperformed the USD by 200% since president Nixon ended to gold convertibility of the USD in 1971. Hence, the yen seems to have preserved purchasing power much better than the dollar. However, in our view there is no observable reality where the yen is actually a store of value. While the yen might have fared better than the USD in recent decades, it has still lost 90% of its purchasing power since 1971 compared to gold. Hence, the close correlation of the yen and gold must have another explanation.

In our view, the reason the yen and gold moved so closely is that the yen exchange rate is driven by similar forces as gold: real-interest rates.

We have shown numerous times that gold tends to by driven mainly by three factors: Real-interest rate expectations, longer dated energy prices and central bank policy1. Therefore, in the absence of large moves in longer dated energy prices, such as the period since the end of 2015, and the Fed focusing mainly on nominal rates rather than the previously deployed unconventional monetary policies, gold prices are once again mostly driven by real-interest rate expectations.

Both the US and Japan issue bonds with an inflation component. In the US they are called Treasury Inflation Protected Securities (TIPS), in Japan they are called JGBis. The US TIPS market, while still dwarfed by the market for nominal government bonds, is relatively large and liquid. Financial data providers such as Bloomberg not only provide data for the yield of active bonds, they also calculate a generic yield, that is, an artificial data series that shows how the yield of a specific maturity changes over time. The same is available for the JPY for the past few years. Unfortunately, publicly available data for yields of Japanese index linked bonds is somewhat incomplete over longer time periods. However, JPY inflation Swap forward data is reported for the past 10 years, which allows us to calculate implied real-interest rate expectations for that period. The results are shown in Figures 3 and 4. 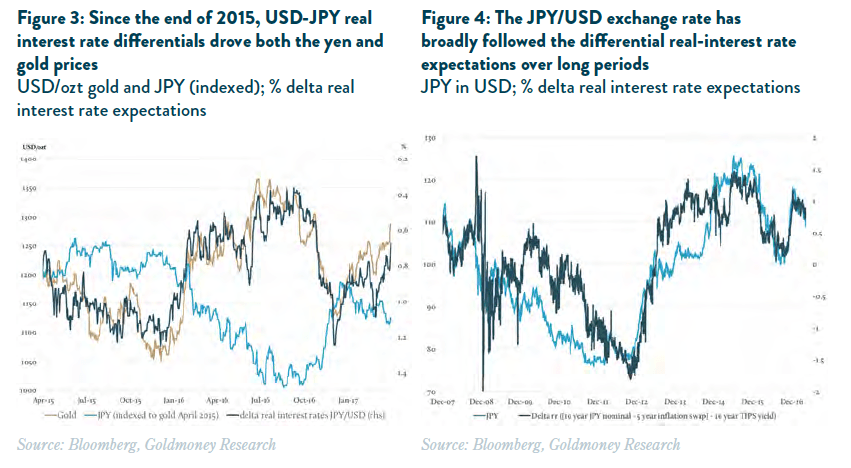 One possible explanation is that relative changes in real-interest expectations of two currencies affect the respective carry trades. In a carry trade, an investor borrows in one currency with low rates and invests in fixed income securities in another currency with higher rates. This generates a profit as long as the lower yielding currency doesn’t appreciate more than the interest differential over the specified time frame. In efficient markets, carry trades should not work. But in practice, carry trades are very popular and do tend to work, until they suddenly don’t. Japanese interest rates have been depressed for decades compared to rates in the US and most other western economies. Since 1990, the average yield on a Japanese 10 year government bond was 2.1% compared to 4.7% for the equivalent US bonds. However, this higher yield came with a higher inflation rate. In Japan it was 0.5%, in the US 2.5%. In turn, the Japanese yen appreciated about 30% vs the USD over that time-frame.

Changes in real interest-rate expectations should influence carry trade investors as it reflects the markets view on how profitable their position will be going forward. Hence, when the real-interest rate differential between two currencies changes, this should have an impact trading positions and thus demand and supply of the involved currencies. Absent any other drivers, this leads to corresponding changes in the exchange rates.

However, absent any other driver is key to this observation. The yen only trades in line with real-interest rate differential as long as there are no other forces at work and the same is true for gold. Gold trades exactly in line with real interest-rate expectations as long as the other drivers that impact gold prices are stable. When for example longer dated energy prices move, as it happened in 2014, gold is driven by several factors. In this case, by the rapid decline in longer dated energy prices and simultaneously by changes in real interest-rate expectations. However, longer dated energy prices have barely moved since the end of 2015 and there haven’t been any changes to central bank policy other than the interest rate hikes.

Hence, gold prices in USD were predominately driven by changes in US real interestrates. This led to the close correlation of the yen and gold since the end of 2015.

The USD/JPY carry trade certainly lost some of its luster as the Fed slashed Fed funds rate to zero in 2008 and it remained there until recently. However, the JPY itself is still a preferred currency in which to borrow for carry trades. Take a more higher yielding currency like the AUD for example where the carry trade has a bit more yield and the relationship between real interest-rates, exchange rates and gold works as well (see Exhibit x). Thus we believe that carry trades are probably a good part of the story. 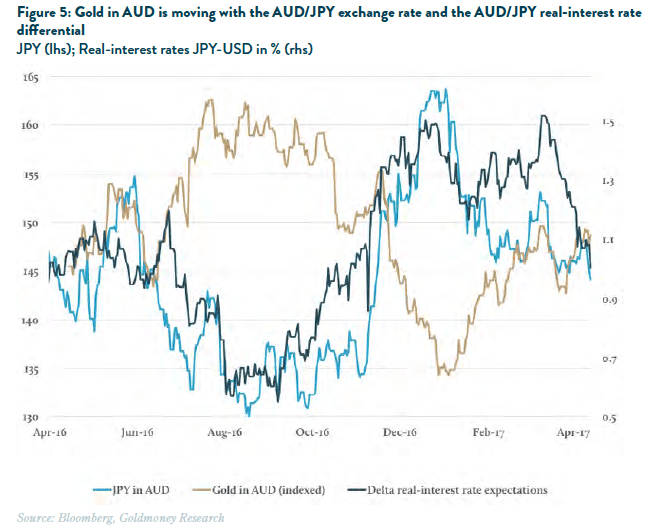 Another large factor is most likely the BOJs sizeable market interventions. The BOJs asset purchase program as a % of GDP has dwarfed the interventionist policies by the Fed and the ECB. The BOJ holds now assets almost the size of the Japanese GDP. In comparison, the Fed holds less than 25%, the ECB a bit over 35%. Arguably in nominal terms the BOJs asset holdings are comparable in size to both the Fed’s and the ECB’s, but the rate at which the BOJ grows its balance sheet is extraordinary. So rather than the JPY and gold simply following real-interest rate expectation differentials, the BOJs massive interventions might move the JPY directly, and to some extent gold too.

Importantly, the current high correlation between the JPY and the USD gold price doesn’t mean that one can make any assumptions of how gold trades in the future. Just because the two recently moved in tandem doesn’t mean they will continue to do so. The yen might be considered a safe haven asset over the short run, but it has depreciated considerably over time, if only a bit slower than most other currencies. Gold has been the only form of money to protect purchasing power over long periods of time.

Gold in USD will continue to be driven by US real interest rates. Therefore, should the JPY suddenly weaken vs. the USD, we don’t expect gold to automatically move lower with it. The JPY/USD exchange rate can be driven by all kinds of factors. If it is due to a decline in the JPY real-interest rates then expect simply gold prices in yen to go higher, gold prices in USD would remain unaffected. The only scenario where lower JPY/USD exchange rates goes hand in hand with a lower gold price is if US real interest-rates rise substantially. But we consider this scenario as unlikely as we explain at length in our recent report “Gold is breaking free from Fed rate expectations” (March 20. 2017).