Many of us are aware of Professor Laurence Kotlikoff of Boston University’s calculation that the net present value of the US Government’s future liabilities rose by $11 trillion in fiscal 2012 to $222 trillion. These are principally welfare, healthcare and social security costs.

This is admittedly a high-end estimate, dependent on variables such as longevity, demographics and the interest rate at which future liabilities are discounted. It is an escalating problem, because baby-boomer retirees suddenly stop paying income and social security taxes and instead draw down on the system. The implication is that these costs are impacting government finances at an increasing rate, potentially undermining the creditworthiness of the US Government.

According to OECD figures other countries appear to be in far worse positions, as shown in the table below, where they are ranked by cash pension costs faced by governments in 2011. 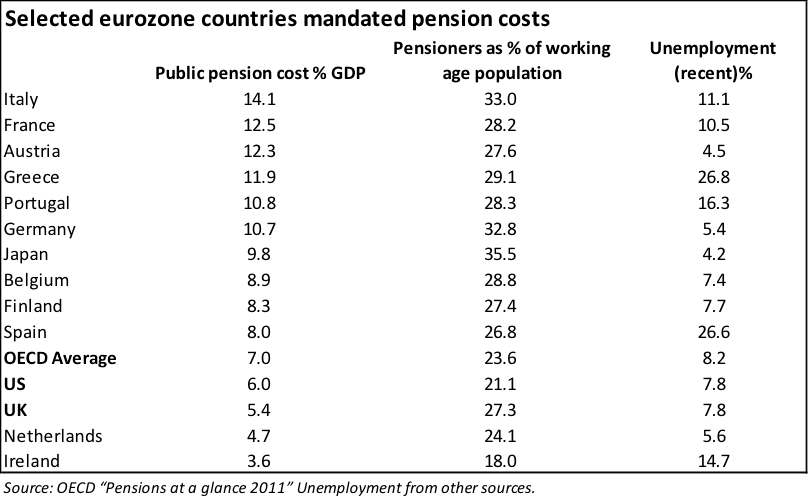 However, pensions are only part of the story, with all these countries providing healthcare and other social services, which with aging populations is a substantial and increasing cost. And while some state healthcare provisions are better than others, when healthcare is run by the state it is more likely to be better as the result of higher spending than greater efficiency. Furthermore, the OECD figures are for cash benefits, excluding benefits in kind; so in Ireland’s case, where pension benefits in kind are estimated by the OECD to be three times the cash amount, the true cost works out at closer to 15% of her GDP.

Japan’s demographic crisis has been well publicised, which is reflected in the figure of 35.5% for pensioners as a percentage of the working population, and presumably worse than that today. However, the financial press is less familiar with the enormous future commitments of European governments, which are truly alarming. And these figures do not even fully expose the difficulties for governments to deliver their welfare obligations.

Eurozone unemployment is over 10% on average. This means that 10% of tax contributors are out of the picture and become a welfare burden, so Spain and Greece where unemployment is at 26% are in immediate trouble with their welfare budgets. Another unfavourable factor is the dominance of the state.

Take France, whose general government is 57% of GDP. Her working population is 28 million out of a total population of 66 million; 3 million are unemployed, which leaves 25 million, of which 8 million are employed by government. We can disregard government employees, since they are a net government liability, not a source of revenue.

That leaves only 17 million productive taxpayers who have to pay for the welfare and pensions for 66 million in a heavily state-controlled economy. Furthermore, a significant proportion of private sector employees are working in nationalised or government-supported industries, so the true figure of real taxpayers is significantly less than 17 million.

We can draw two conclusions about the European states: their welfare, health and social service liabilities are, unless they ditch the majority of their welfare commitments, going to bankrupt them; and because their true taxpaying base to fund this largess is smaller than generally realised, taxes are going to have to rise to the point where it is not worth genuinely productive people working.