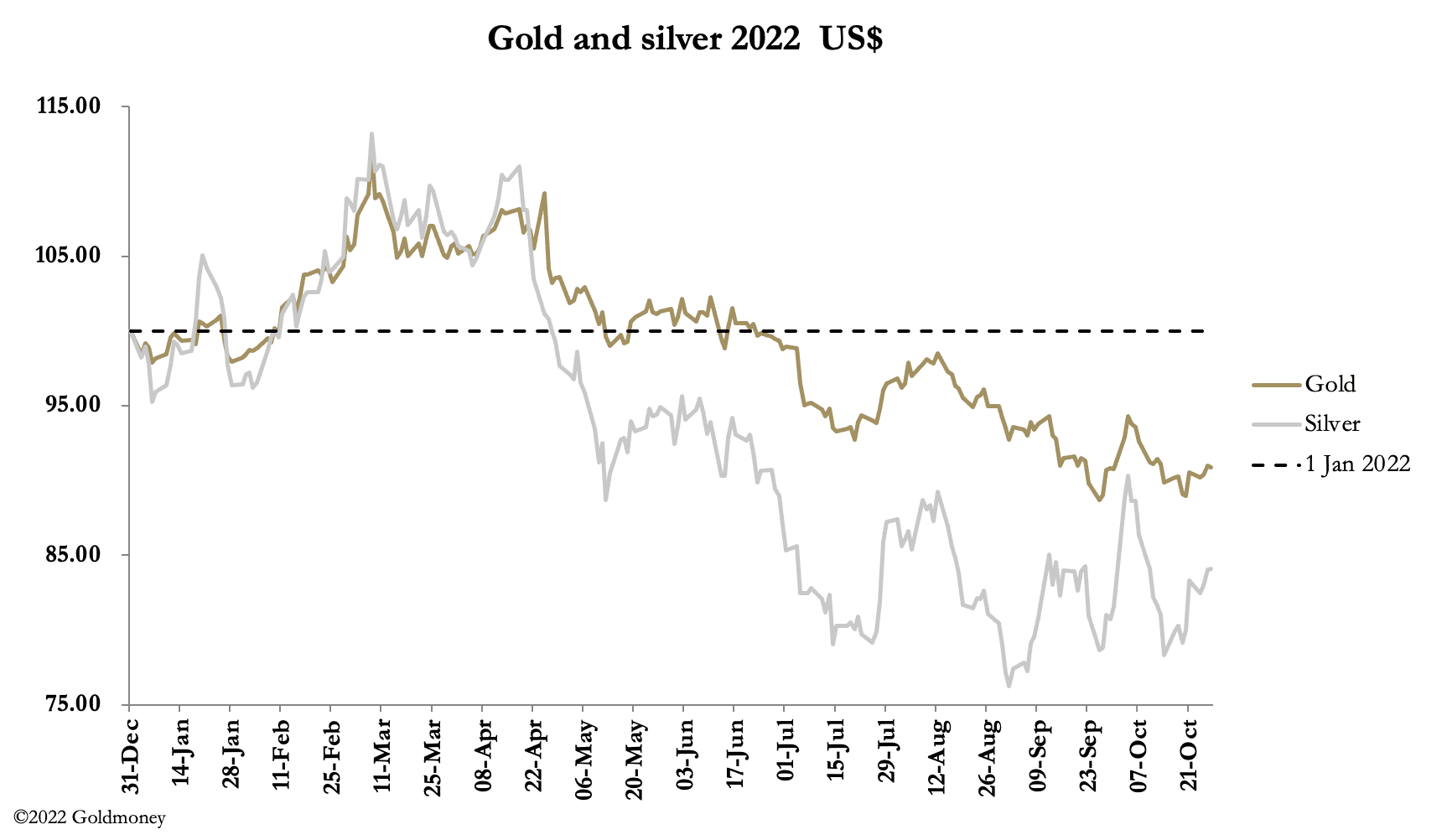 Gold and silver consolidated the small gains of the previous week in subdued paper trading. In European this morning, gold was at $1649, down $9 from last Friday’s close, and silver at $19.22 off 16 cents. Broader financial markets also reflected consolidation.

The dollar’s TWI weakened, at one point dropping below 110. There appeared to be a concerted effort to keep the yen rate below 150, the euro rallied to over parity and sterling improved on the back of a new market-friendly UK government. This is reflected in the chart below of the dollar’s TWI. 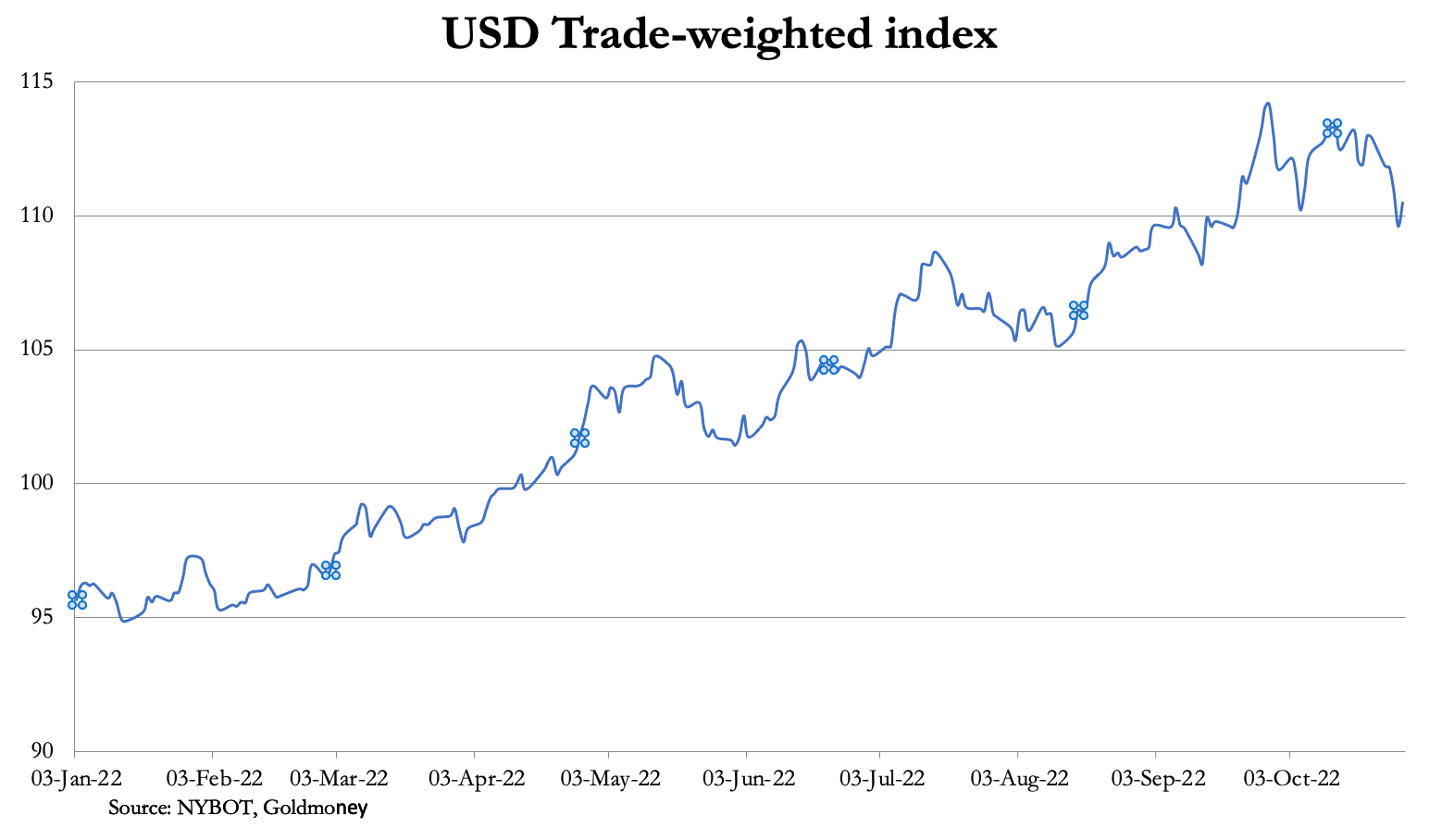 Bond yields in the major currencies backed off from recent highs. On 21 October the 10-year US Treasury note yield peaked at 4.3%; this morning it was at 4%. The 10-year JGB yield fell from 0.255% to 0.245% as the Bank of Japan stepped up its bond buying to keep yields suppressed. The ECB raised its deposit rate by 0.75% to 1.5%, but echoing the Bank of Japan’s monetary stimulus, it said it would continue its quantitative easing. Equity markets rallied. With commodity prices generally subdued, gold and silver were quiet backwaters. It’s like watching paint dry, but the technical situation is becoming potentially explosive.

The hedge fund community, which is the Managed Money category on Comex, is now net short of both gold and silver contracts. On the last COT figures, the net short position in gold was 25,698 contracts, as shown in the chart below. It has only once been more extreme, in October 2018 when net shorts briefly spiked up to over 100,000 contracts. 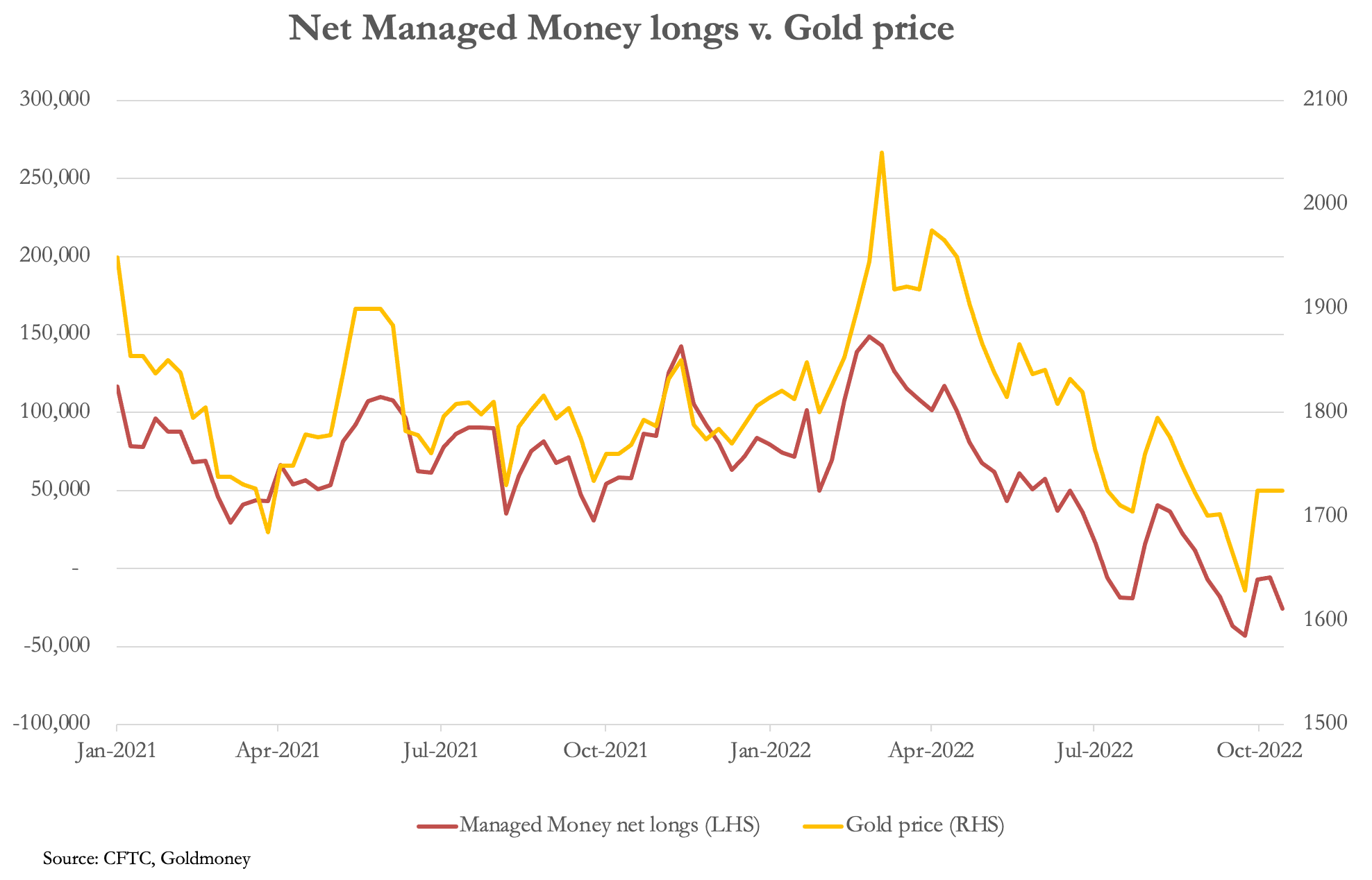 In silver, the net short position is 7,712 contracts. Again, this is very unusual. 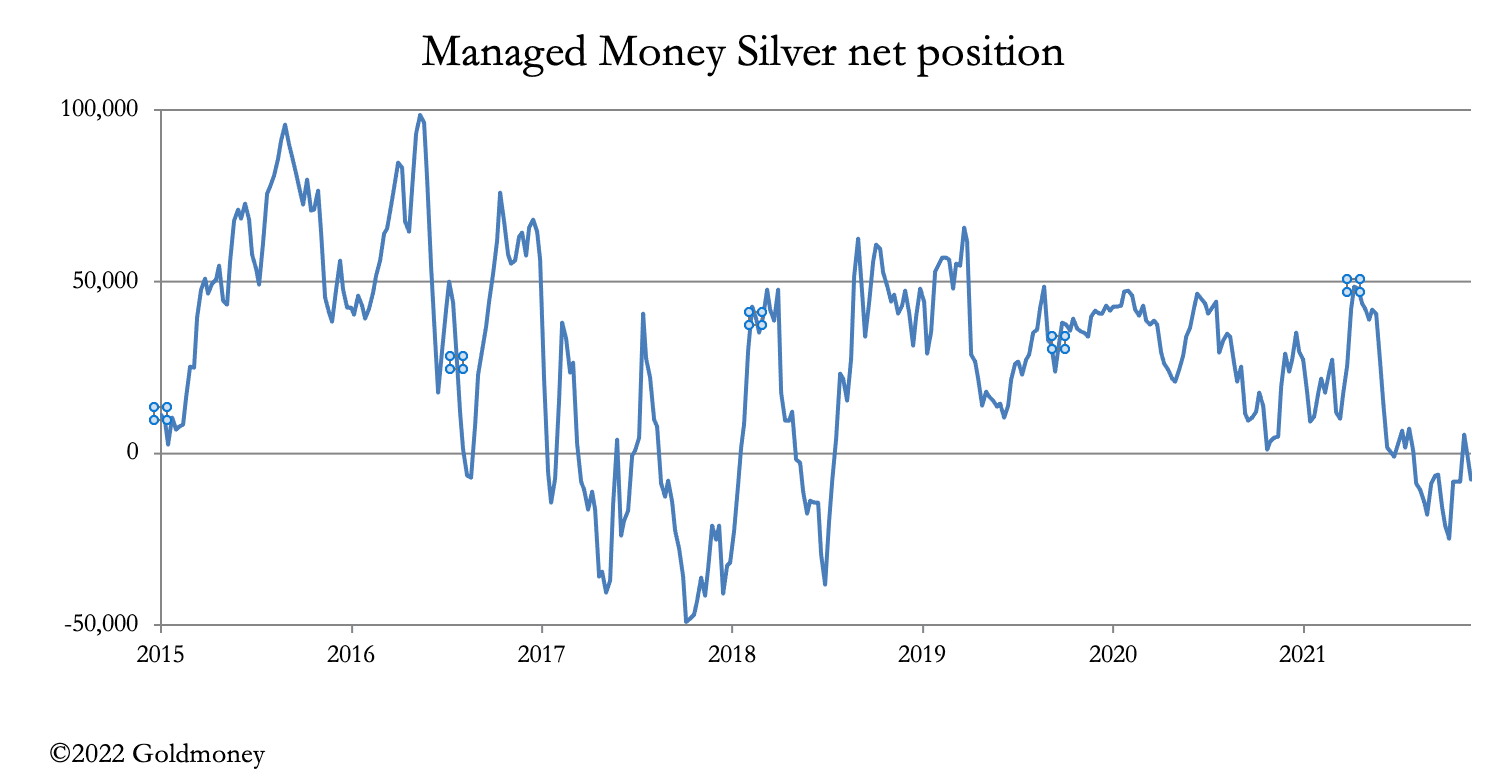 Accompanying these oversold conditions is a lack of available physical stock The eligible category of silver in Comex vaults is rapidly declining, suggesting there is an increasing risk of a liquidity crisis, such as that seen in the nickel contract on the LME last March.

Turning to the Swaps (mostly bullion bank traders), in silver they are net long 12,303 contracts. This is understandable: at the LBMA jamboree in Lisbon, it was acknowledged by participants that the outlook for silver was bullish. They were less bullish on gold, but then their short position on Comex was still 74,465 contracts. The Swaps’ gold position is next. 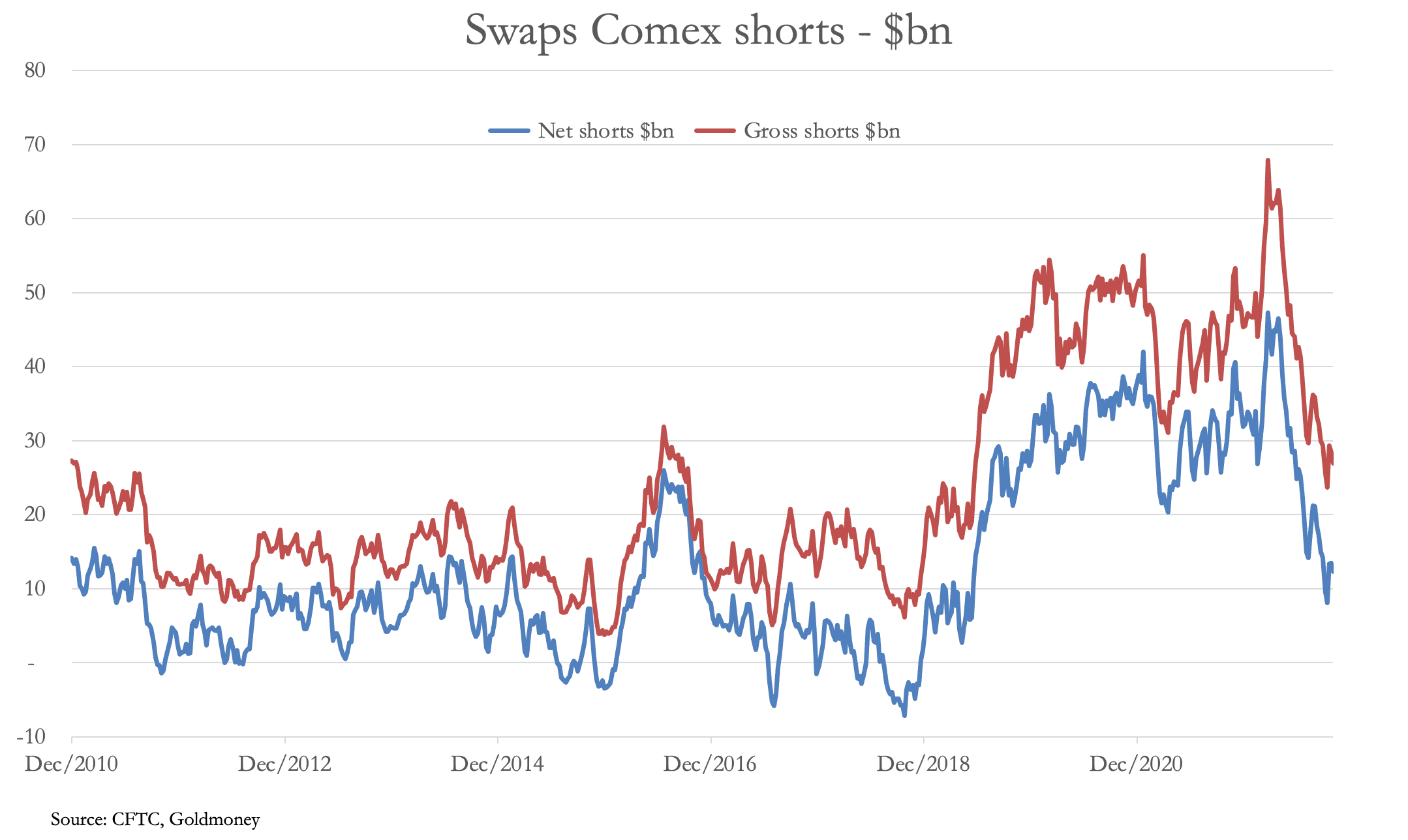 With the hedge funds already short, it is the Other Reported category which is long, and it is this category which has been standing for delivery. From 30 September, this has totalled 23,284 contracts, or 74.2 tonnes.

This week, Credit Suisse reported its third quarter losses and announced it was raising CHF4 billion in new share capital, laying off 9,000 staff, and selling off its securitised products group. Effectively, it is a rescue plan for the bank. Credit Suisse’s predicament highlights the systemic risks in the major banks, with share prices for the majority of the G-SIBs standing at a discount to book value of 50% or more.

Rising interest rates may be on hold for now, but if they start rising again it will threaten to tip the G-SIBs into a systemic crisis.