Watch out for maturing debt

It was hoped that the appointment of Mario Monti to head a new Italian government would stabilise Italian and European bond markets.

Instead, after a brief pause, bond yields on Italian debt rose back above the seven per cent level, leading the yields of other euro-denominated sovereign bonds upwards. It is not just that markets have been unimpressed about the prospects for the new Italian government, but even maturing debt will be hard to refinance.

To understand why, assume you are an executive director of an average Euro-zone bank. You have loans to the private sector, the bulk of which gives you exposure to large and medium size businesses, with some smaller businesses thrown in through your branch network. You have exposure to residential and commercial real estate. Your in-house economist tells you that the wave of public spending cuts in the weaker Euro-zone states is going to have a negative effect on your borrowers doing business in those regions, and that the prospects for Germany, which exports to these markets, are also deteriorating. Your branch managers all tell you that smaller companies are struggling and with the prospect of deteriorating economic conditions you can expect a rise in bad debts.

Meanwhile, your large depositors are becoming aware of risks in the banking system, and are beginning to seek reassurance that their money is safe. Your branch managers also report that even small depositors are getting edgy. And in the interbank market, other banks are reducing the amounts they will lend to you.

You should be worried. As recently as three months ago your in-house economist had forecast reasonable German growth led by exports, and he expected the problems of Greece et al to be contained, if only because it was in everyone’s interest to do so. In less than three months the situation had deteriorated rapidly. And then there is all that sovereign debt you took on in happier times, when by borrowing euros in the interbank market, you could buy Greek, Portuguese, Spanish and Italian sovereign debt and turn five basis points on what seemed a risk-free deal. You remember the strategy: balance your private sector risk with risk-free sovereign debt.

You now have substantial losses on sovereign debt, and your private sector loans are exposed to economic weakness. You see risk everywhere, not reward. You have hidden sovereign losses by transferring the positions from trading accounts, where they were marked-to-market, to “investments”, which are marked-to-maturity. This is done on your auditor’s recommendation and with the central bank’s blessing.

What do you do? You know your financial position is considerably worse than stated, and sources of funding are becoming very difficult. You need more information. You ask your bond dealers to run off a list of government and corporate bonds held by the bank to enable you to estimate the money coming in from maturing redemptions. You need the cash.

Welcome to the world of European banking. As yet, few people understand the fundamental pressures driving bank balance sheets to contract, and while that remains the case, it is not enough for Euroland states to just balance their budgets: they will need to cut enough to pay back much of the maturing debt as well. Unless, that is, the ECB relents and steps in to cover the deficits. 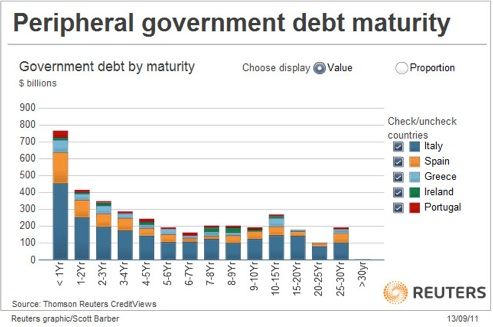