Recently the GoldMoney Foundation published an article proposing a new measure of money supply, the Fiat Money Quantity (FMQ), so that a direct comparison can be made between gold and currency, principally US dollars.

This has two important functions: it allows economists to compare sound money with fiat currency for the purpose of monetary analysis, and it allows us to adjust the price of gold in dollars to allow for both the increase in the quantity of FMQ and also the accumulating addition of newly mined gold.

The original article shows just how unsound currency has become since the banking crisis, with FMQ appearing to be hyper-inflating from that time. This article explores the implications for the price of gold.

Firstly let's look at Chart 1, the chart of FMQ. 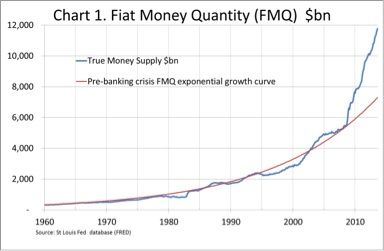 It differs slightly from the chart in my original article, in that I have recalculated the exponential growth curve at 5.859%, which was the average annual growth rate for FMQ between 1960 and 2008 before the banking crisis. This throws up a larger gap of $4.5 trillion between that long-term trend and FMQ today. Therefore, FMQ is now 62% over trend.

This is a massive and potentially currency-destructive development going unrecognised. But since July 2008, the month before Lehman Brothers collapsed, gold has risen from $918 to about $1270 today, which is a 38% increase. Does this illustrate that gold is broadly discounting monetary developments?

The answer is no, because the question ignores the accumulating quantity of above-ground gold and more importantly the expansion of FMQ. And while both have increased over the last five years, FMQ has expanded much more rapidly than the stock of gold. The net effect is illustrated in Chart 2, where gold at $918 has been indexed to a base of 100 as at July 2008. 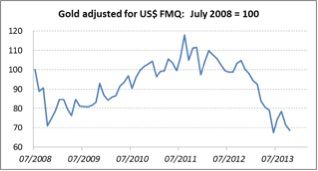 This chart shows that at Friday's nominal price at $1270, gold adjusted for increased gold stocks and FMQ has actually fallen to 68, 32% down from its pre-Lehman crisis level.

Of course, any value we place on gold is entirely subjective; but in coming to that view we naturally assume that the quantities involved do not change. The more sensible thing to do in forming a judgement is to take changing quantities into account, particularly when the expansion of the currency is unprecedented and appears to be out of control.

Before Lehman collapsed, there was a general lack of awareness of the risk that the whole financial system was in danger. In this context, a gold price of less than $918 was perhaps justifiable. After the event, while the Fed struggled to stabilise the banking system, the gold price initially fell to $656, or to 71 on our index, reflecting fears of a deflationary collapse. As the Fed showed signs of succeeding with monetary expansion, gold began to rise and in January 2009 regained the pre-Lehman crisis level in nominal terms for the first time. It wasn't until September 2010 that gold recovered to pre-Lehman levels in real terms deflated by both FMQ and the increased stock of gold.

The conclusion is simple: gold should logically be priced at a premium to pre-crisis levels to reflect the increasing inevitability of future monetary hyperinflation. That figure today would be somewhere above $1860, which is the equivalent of the price in July 2008. Instead it stands at a discount of 32% to its pre-Lehman level, and therefore appears to be grossly under-priced.