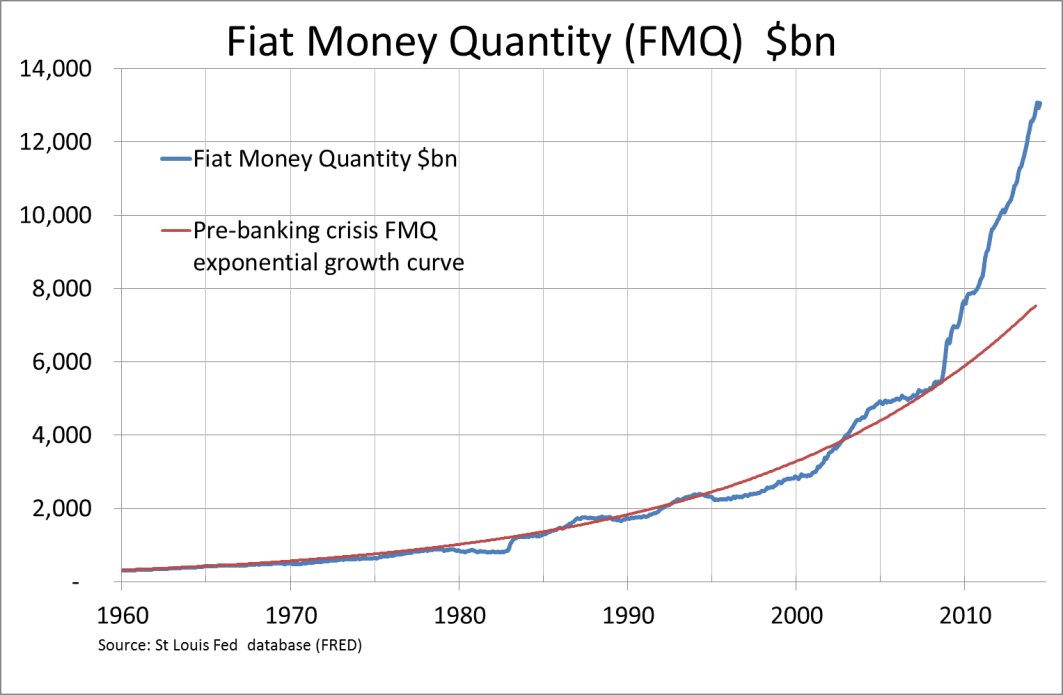 June's FMQ components have now been released by the St Louis Fed, and it stands at a record $13.132 trillion. As can be seen in the chart above, it is $5.48 trillion more than an extension of the pre-Lehman crisis exponential growth trend. At this point readers not familiar with the construction of FMQ and its purpose may wish to refer to the original paper, here.

It should be borne in mind that there may be seasonal factors at play, with dips in the growth rate discernable at this time of year in the past. So the slower growth rate of FMQ, up $44bn between April and June when it might have risen $150-200bn, is not necessarily due to tapering of QE3. If tapering was responsible for slowing growth in FMQ, we could expect to see some tightening in short-term interest rates. But as the chart of 3-month T-bill rates shows they have been in a declining trend since last November. 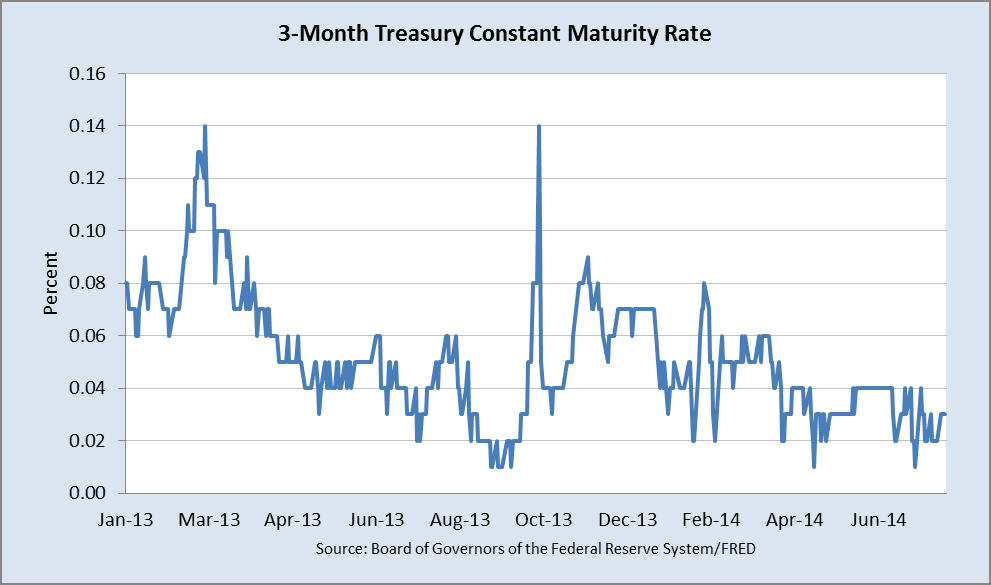 The chart confirms that tapering seems to be having little or no effect on money markets and therefore the growth rate of fiat currency.

Weakness in interest rates is also consistent with poor economic demand. This week the first estimate of Q2 GDP was released which came in at an annualised 4%, substantially above market estimates of 3.1%. This outturn conflicts sharply with the lack of any meaningful demand for money, until one looks at the underlying estimates.

Of this 4% increase, the change in real private inventories added 1.66%. In other words GDP based on goods and services actually sold was only 2.34%. That changes in unsold goods, which is what inventories represent, should be part of final consumption is a dubious proposition, but need not concern us here. According to the technical note accompanying the release, figures for inventories and durable goods (which showed an incredible rise of 14%) are estimated and not hard data, so are subject to future revision. On this basis, the surprise GDP figure is little more than a government econometrician's guess until the real data is available. Suspicions that these guesses err on the optimistic side are confirmed by the experience of the Q1 GDP figure, which was revised sharply downwards from first estimates when hard data eventually became available.

Whichever way we look at FMQ, it continues to expand at a frightening pace irrespective of the GDP outturn and its flaws. Furthermore, a look at the most recent Fed balance sheet confirms this view, showing that the 1st August figure will be considerably higher, unless there is an offsetting contraction of bank credit.

There is little sign of any such contraction. We can conclude from short-term market interest rates that the US economy is going nowhere fast, contrary to this week's GDP estimate, and that demand for credit continues to come from essentially financial activities. But given that GDP estimates turn out to be far too optimistic, what if the US economy stalls or even slumps? Won't that lead to a reversal of FMQ's growth trend?

This is essentially the argument of the deflationists. In a slump they expect a dash from credit into cash as asset prices tumble. The counterpart of credit is deposits, the major components of FMQ. And without Fed intervention FMQ would rapidly contract. But in the event of a slump the Fed cannot be expected to stand idly by without taking extraordinary measures: in the words of Mario Draghi at the ECB, whatever it takes.