Deficits are mounting in pension obligations. It is a global problem over which pension trustees are helpless. It is also a problem that’s brushed under the carpet, with prospective and current pensioners generally unaware of the threat to their retirement. Investors in companies with defined benefit schemes, schemes which promise an inflation-adjusted entitlement based on final salary, generally ignore this important issue, as do most stock market analysts. Analysts know the deficits are there, but so long as they are buried in the notes to the accounts and not actually represented in-your-face on balance sheets, the assumption appears to be they can ignore them.

Company directors may not shout out about it, but they are bound to be very much alive to the problem. Last week, BT, the British telecoms giant, tried to save itself money by attempting to persuade a court to allow it to substitute the Retail Price Index for the Consumer Price Index in calculating payments to its pensioners, arguing RPI had become an inappropriate measure of inflation. The application was rejected.

Mr Justice Zacaroli said, “It’s impossible to say that RPI is wrong and CPI is right, or even that RPI is more wrong (or right) than CPI, as an estimate of the likely increase in the cost of living for pensioners.” BT’s pension deficit is estimated at £14bn, and it had hoped to save billions by linking it to the CPI, but the judge ruled the original agreement in 2002 to link payments to the RPI must stand.

The judge was certainly right in his assessment, more so than he probably realised. The concept of a general price level, which CPI and RPI are meant to represent, is actually unmeasurable, as the divergence between the two measures illustrates. The judge presumably thought both measures were valid but in fact neither are, being attempts to measure an abstract hypothesis.

Not that BT was being entirely honest in this matter either. Since indexation of pensions commenced, companies like BT chose the RPI for one reason: it included estimates of changes in mortgage costs, which over time had been falling. Therefore, the RPI stated a lower rate of price inflation than the CPI. Now that it has reversed, BT and other companies with defined benefit schemes should really have no grounds for complaint.

Unfortunately, pension deficits in defined benefit schemes are now the rule. In the UK alone, they are currently estimated to total £410bn. This is despite attempts over the years to alter private sector pensions to a defined contribution basis, which means pension shortfalls become the pensioners’ problem.

And we are not even talking about unfunded public pensions, which are covered out of current taxation. These additional liabilities in Britain are estimated to be about £1.8 trillion, which together with the deficits on defined benefit schemes amount to over 100% of GDP. Both the Treasury and Office for National Statistics completely ignore the problem, not even according it a footnote in the national statistics.[i]

In the US’s national accounts, unlike in the United Kingdom’s, the public-sector pension shortfall is shown at $14.1 trillion, which is about 70% of GDP. However, including Medicare and Medicaid, the total rises to $46.7 trillion[ii]. Independent estimates put this much higher, at up to $220 trillion[iii]. However, estimates of American private sector pension and healthcare deficits seem harder to track down. Germany, France, Italy and the other welfare states have similar problems.

The future cost of post-retirement welfare is made considerably greater by the suppression of apparent price inflation through statistical method. You may be able to reduce the real cost of state pensions this way, but you cannot reduce the cost of providing free or subsidised healthcare to an aging population. The relative size of the US’s future pension liabilities compared with far larger Medicare and Medicaid says it all.

Actuaries blame the decline in investment returns, which are governed by interest rates. But interest rates didn’t decline of their own accord: they are supressed by central banks, forcing bond yields lower than they would otherwise be in a free market. Furthermore, central and commercial banks in all the welfare states continued to flood markets with money at a compounding rate which exceeded short-term interest rates for most of the time after the bursting of the dot-com bubble in 2000. Following the great financial crisis in 2009, interest rates were suppressed to zero or even into negative values, and monetary expansion accelerated even more. Much of this excess money has been invested along the yield curve, suppressing the rates of return for pension funds.

Bond prices, firmly tethered to short-term interest rates, have principally benefited investors who do not hold their bonds to maturity. Pension funds are very long-term investors holding bonds to maturity, and the rate at which bond coupons and dividends accumulate is far more important to them than bond price fluctuations within a credit cycle. Over the decades, fund managers have compensated for declining bond yields by allocating funds to equities, in effect speculating that capital gains will replace the near certainty of bond returns when held to redemption. Sometimes this policy pays off, and sometimes it doesn’t.

As well as the vital contribution to a pension fund’s performance from compounding bond yields, the net present value of future liabilities is calculated by discounting them at current bond yields, or an assumed investment return signed off by the fund’s actuaries. When these rates are low, the amount of capital required to cover future payment streams is greater than if a higher compounding rate is used.

The real culprits in all this mess are the central banks. They are effectively robbing ordinary people of their future pensions to pay for reflationary monetary policies, and they are not being held to account. Governments add to the destruction of pension fund value by ensuring their statistical methods underreport the loss of their currency’s purchasing power. Apparently, it’s all right for a government to manipulate the inflation adjustment to cut its own liabilities, while it’s not all right for a company like BT to seek to do so.

Not that BT should be permitted to amend its contractual obligations in this way, but it would be more constructive for BT to use its lobbying power to persuade government ministers of the hidden damage the Bank of England and other central banks are doing to pensions. We see no sign of that, probably because the broader monetary issue is not understood by companies, trustees, or indeed the actuaries. Furthermore, companies themselves are keen to see artificially low interest rates, both to reduce their own borrowing costs and in the belief that they encourage consumption.

Sound money is the cure

With sound money, the pension problem doesn’t arise. Gold, when used as money, has a yield, just like fiat currency, only it tends to be lower because there is no debasement risk. And if a central bank backs its note issue and all electronic money with gold, it can no longer manipulate interest rates. All financial markets are forced to become honest with respect to pricing. The return on a pension fund’s investments then reflect the lending risk in terms of borrower and duration, to which can be added the benefit of gold’s increasing purchasing power over time. This means a wisely invested fund that carefully matches lending risk to investment return can confidently run an actuarial surplus and minimise its pension contributions.

The superiority of sound money as an investment medium for genuine investment, as distinct from the fiat-currency system that is victim to the instability of debt-driven credit cycles, is illustrated in the chart below. It is of the major four welfare-driven currencies measured in gold since 1969, two years before President Nixon ended the fixed price arrangement with the dollar. 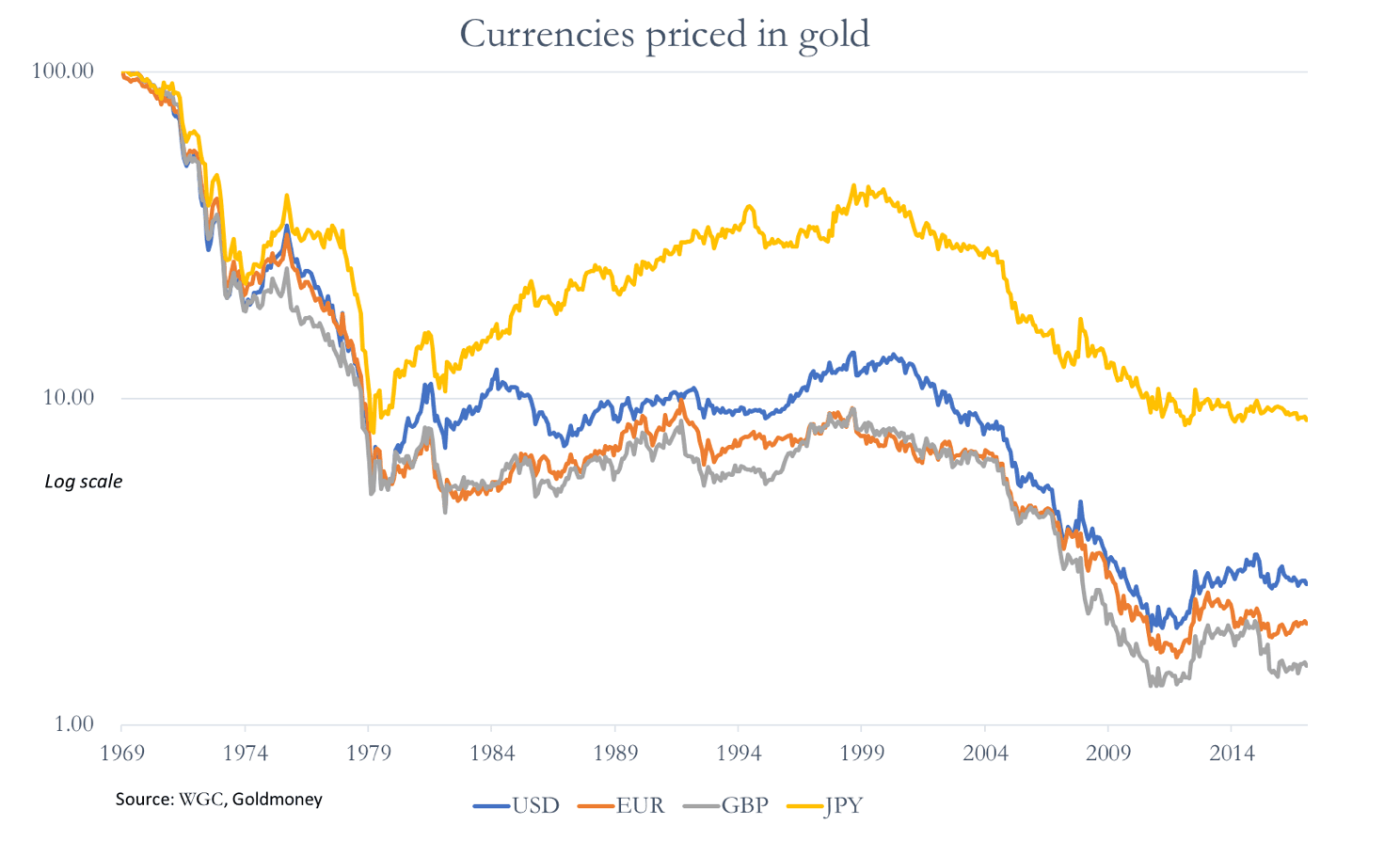 A dollar-based pension fund has had to compensate for the loss of 97.4% of its purchasing power since 1969, measured against gold. A sterling-based portfolio has to make up even more, 98.4%.[iv] For a time there were reasonable nominal yields on long-term debt available in bond markets, but they would have had to compensate for a compounded annual depreciation of 7.1% measured in dollars, and 8.2% measured in sterling over the last 49 years.

Ignoring expenses for the moment, these rates would reflect a portfolio comprised of physical bullion alone. However, an investment manager would have obtained a yield on his gold by lending it, or more likely by lending gold substitutes, for interest, by buying suitable bond investments.[v] So not only would there be sufficient income to pay management expenses leaving surplus funds to be reinvested, but the rising purchasing power of gold as sound money would have added perhaps a further one or two per cent per annum to the real return. This would mean that contributions for a fully funded pension could be relatively modest.

The fashionable argument that the older generations are benefiting at the expense of the young is wholly negated by the hidden financial destruction on pensions, due to be exposed in the coming years. As the young grow older, they will also find they are victims of the destruction of pension values by inadequate compensation for the falling purchasing power of state-issued currencies.

Monetary inflation is a hidden tax, and while many of us are aware of the effect on our current income, few of us extend the logic to our pensions. And even fewer of us understand that government pensions, funded out of current taxation, will not keep pace with price inflation.

Even assuming fiat currencies don’t lose purchasing power at an accelerating rate, the pensions crisis is bound to become more apparent as time marches on, but it will take the destruction of the current monetary regime to remedy it.

[iv] The euro rate before its introduction is calculated on the basis of its original proportionate currency constituents and is now worth only 2% of its original 1969 value. The yen is worth 8.6%.