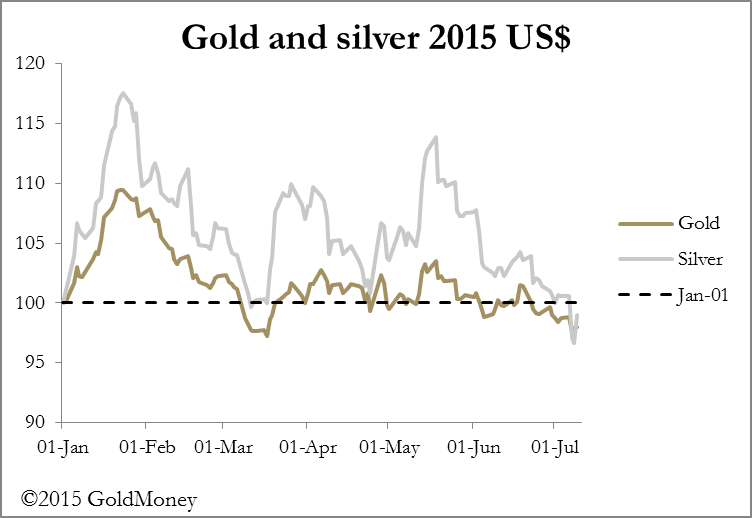 If we can reassign meanings given to the biblical Four Horsemen of the Apocalypse from the original, we can then say financial markets saw two of them this week.

The first brought us the Greek Crisis which went from very bad to impossible to resolve, and the second was a collapsing stock market in China. Between them these two events triggered another flight into the US dollar, which would have been far worse without central bank intervention. With the dollar rising against the euro, commodity prices, particularly energy and oil, have fallen sharply, with US Crude down over 15% in the last month.

Against falls of that magnitude the falls in gold of 3% and silver at 7% over the same period could have been worse. Very few market participants in Western capital markets use gold as a safe-haven in troubled financial times thinking of them primarily as commodities, seeing the dollar and US Treasuries as risk-free; so it's no surprise that the dollar rose and Treasury yields fell.

China's stock market may or may not be guided out of its slump by government intervention. The Greek crisis appears to be the greater currency danger, with Greece being only part of the problem. As principal creditor to Italy, Spain and Portugal, the real problem is with Germany, which cannot afford economically and politically to write off these debts, and the ECB which is in negative equity on Greece alone. And if this becomes increasingly obvious in the coming weeks, confidence in the Eurozone and the euro itself can be expected to erode.

A third Horseman may soon hove into sight. A credit implosion in China plus a slump in Eurozone confidence and economic activity would be powerful negatives for the US economy, possibly bringing yet more extraordinary measures from the Federal Reserve. The Fed is unlikely to stand by idly and watch from afar the collapse of the Eurozone's $11 trillion economy, nor can it stand by while stock prices in the US slide if Chinese negativity spreads to other markets. It is at that point that owners of physical bullion should sleep better at night than those that have none.

Silver
The market set-up is now extreme, with falling prices in futures markets generating physical buying of precious metals, a dichotomy that should lead to a more general scramble for physical metal eventually. This is already evident in silver, with the US Mint cleaned out of silver eagles and unable to supply any more until August at the earliest.

Silver is a good example of how extreme market positions have become. The chart below is of Managed Money short contracts on Comex. 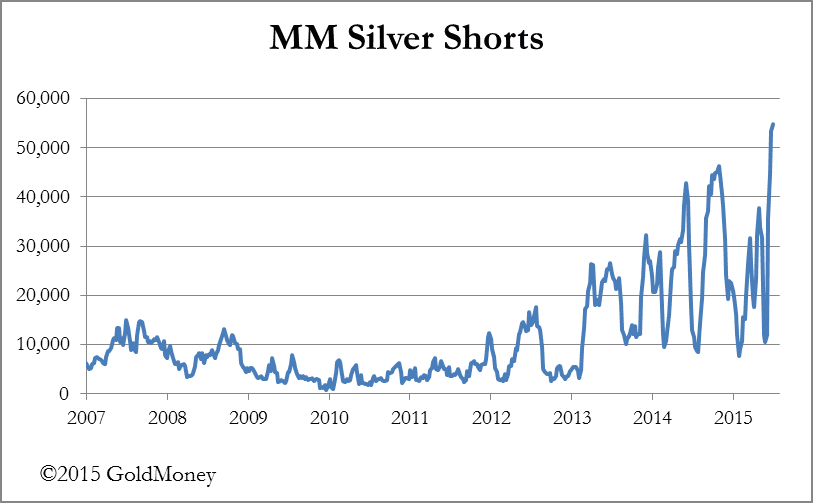 This category of speculative shorts is the highest on record, and represents 273 million ounces, or over 30% of global mine production. These shorts are in an illiquid market, and have allowed professional dealers to square their books. This is reflected in record longs for swap dealers. 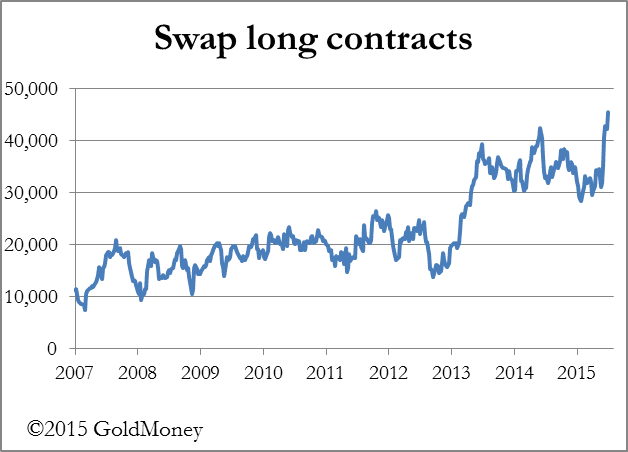 Admittedly, this is a one-sided view that excludes the managed money long positions and the swap shorts; but the objective is to show just how unbalanced the futures market for silver has become.