The missile strike is being presented as a one-off action, just like the others. Trump has gone native. 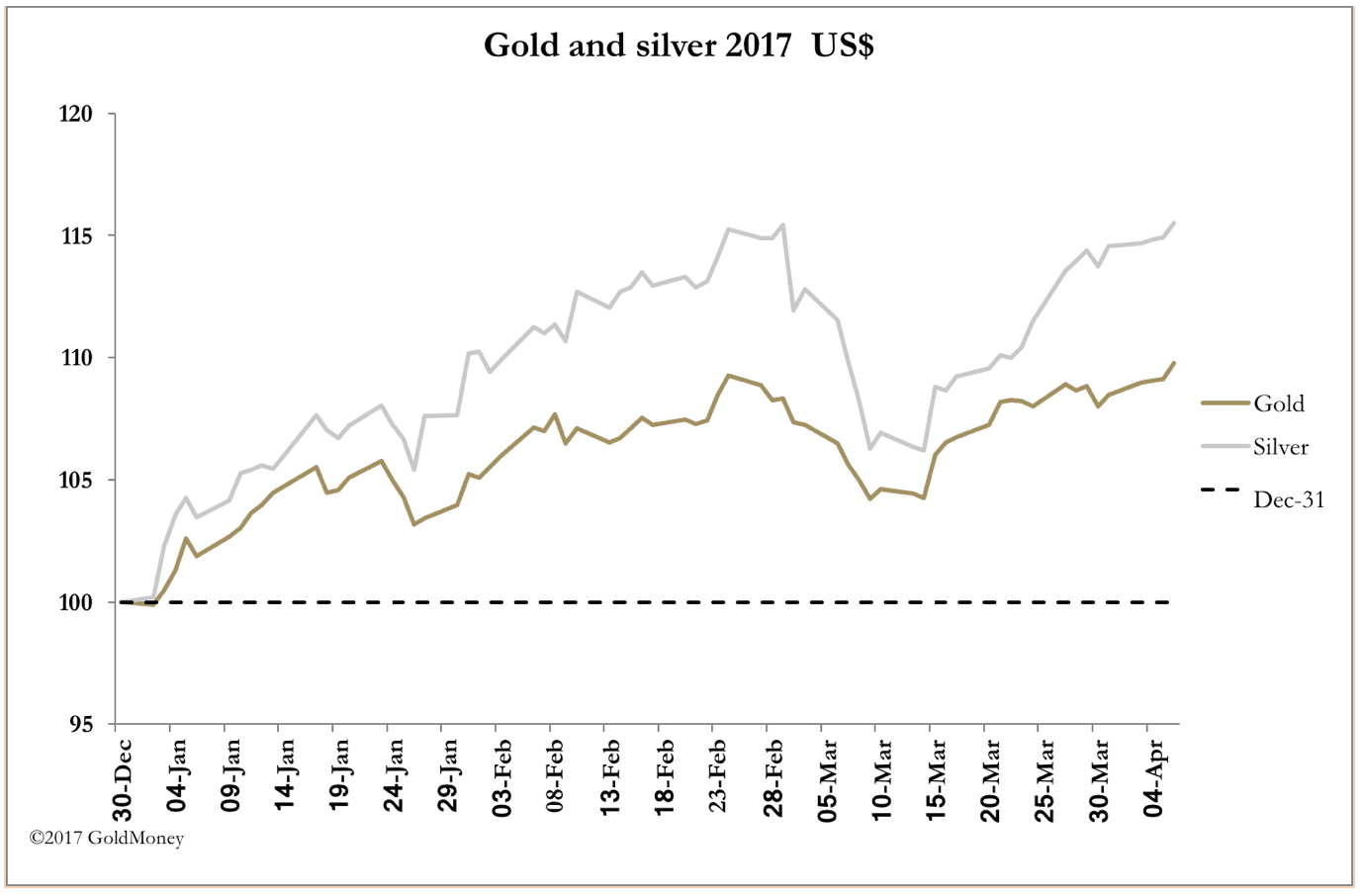 Gold and silver prices hardly moved most of the week, maintaining a firm undertone in quiet trade, until last night when America launched a missile attack in response to Syria’s alleged use of chemical weapons. After being barely changed from $1249 at last Friday’s close, in early European trade this morning gold rose overnight to $1265, and silver rose from $18.25 to $18.41 on the same timescale.

Whatever the moral justification for President Trump’s action, it has the hall marks of not being thought through. Successive US presidents have made the mistake of being drawn into punitive raids in the Middle East, always with negative consequences. The missile strike is being presented as a one-off action, just like the others. Trump has gone native.

There will be destabilising consequences. A market report is not the place to analyse them fully, but for our purposes it should be noted that despite gold rising solidly without more than the briefest consolidation for the last four weeks, on Comex technically it is slightly oversold. The first indicator that this might be so is the level of open interest, the subject of our next chart.

Open interest has fallen to about 430,000 contracts, which is below the 460,000 average of recent years. This decline is due to the April contract running off the board without damaging the price, which is highly unusual. The next chart is of the principal speculator group’s net position, the hedge funds. 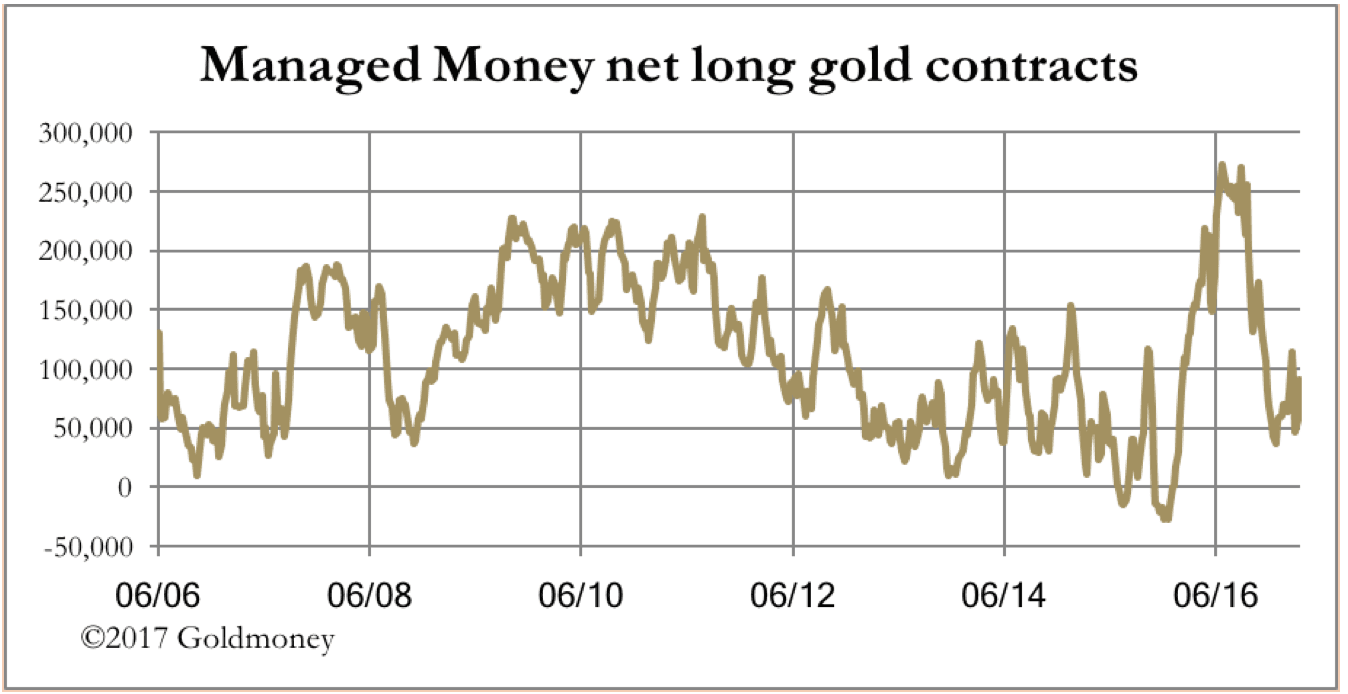 Ten days ago, the date of the last Commitment of Traders report available, net longs stood at 91,000 contracts, against a long-term average of 112,000 contracts. At that time, open interest was about 20,000 contracts higher than now, which tells us tonight’s number for last Tuesday could show net longs as low as 75,000-80,000.

With this technical background, gold is likely to drive higher from here. The normal process of killing the speculator’s longs by dumping 20,000 contracts to create a sell-off will not work. Furthermore, the technical position, with $1260 seen as a significant chart point, has been broken. The 200-day moving average is now beneath the price and traders are likely to turn bullish again. This is shown in our last chart. 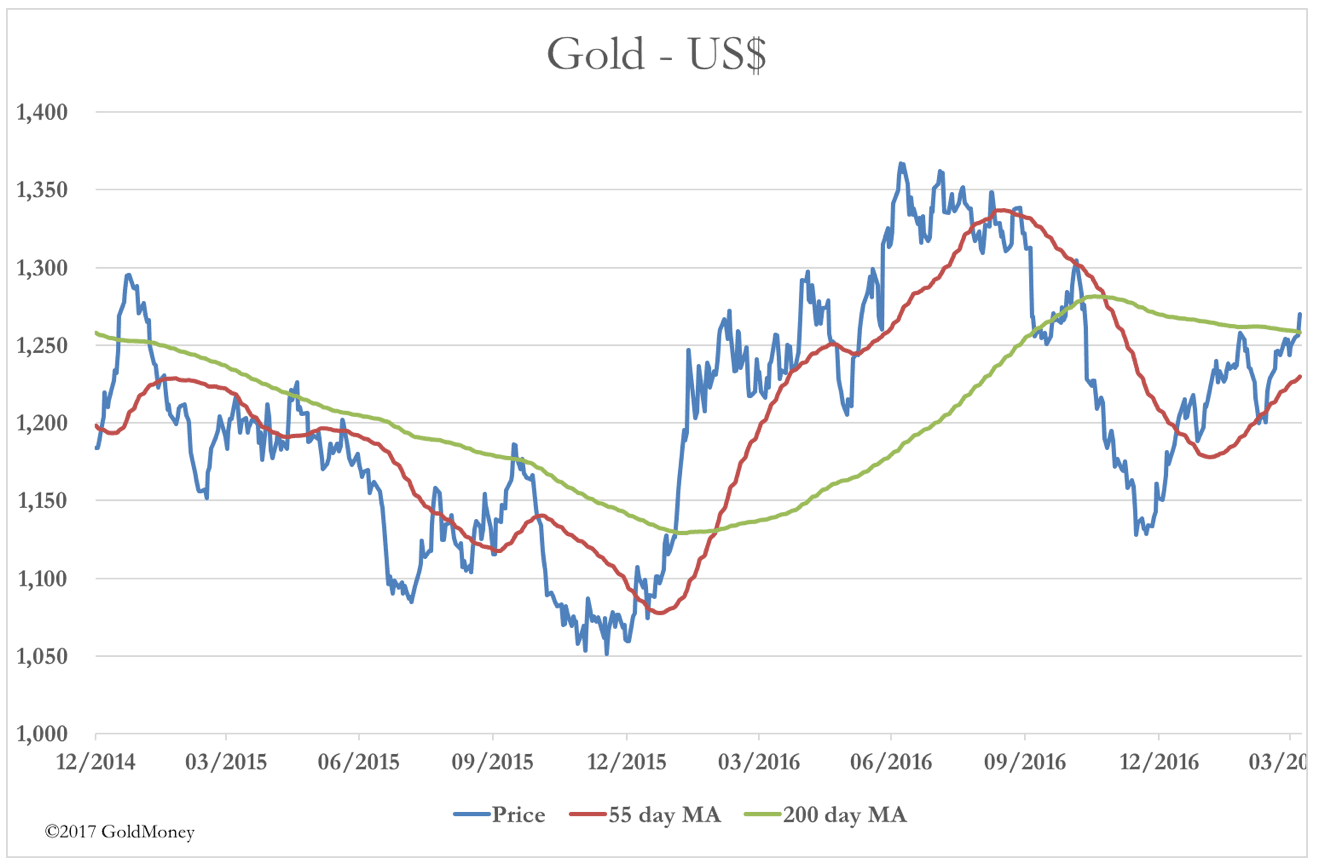 Traders will now look to buy the dips, the previous high on this rally at $1260 having been surpassed. The 55-day MA is now rising bullishly. In fundamental terms this analysis might be twaddle, but we must remember that hedge fund speculators rely on charts for their short-term trading, and will be watching this closely. Bear in mind that a week ago last Tuesday there were some 60,000 short positions in this category (presumably short-term dollar bulls), some of which have probably been closed, but without much doubt there are some left to panic.

Tonight’s COT release will be very interesting. Given the Syrian situation is ripe for deterioration and further surprise, prospects for gold prices appear to be as bullish as they get.