Gold prices rallied 25% in 2020 after having gained 19% the year before. We believe this marks still only the beginning of the current golds price cycle, as all main drivers for gold prices are strongly skewed to the upside.

In our gold price framework (Gold Price Framework Vol. 2 – The Energy Side of the Equation, May 28, 2018), we identified three main price drivers for gold prices over the long run: Central bank policy (real-interest rate expectations and quantitative easing), net central bank gold sales and longer-dated energy prices (see Exhibit 1). When we presented the first iteration of this model in late 2015, we came to the conclusion that these three drivers were all aligned for gold to be at the bottom of its prices cycle and enter a new cycle. 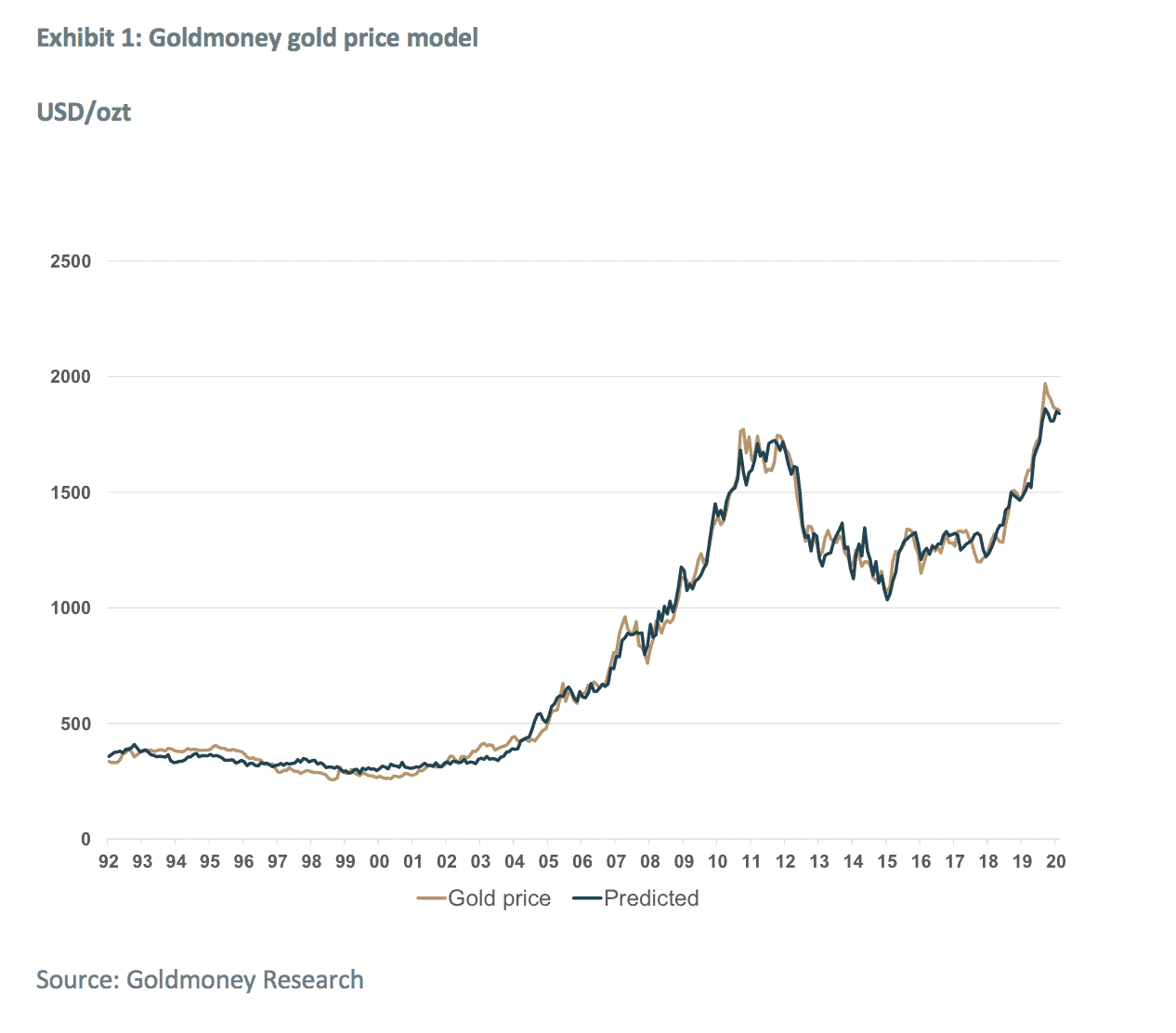 At the time, gold was trading at around $1100. Over the subsequent years, gold prices have gradually risen in all currencies. It made new record highs in every currency one by one, until it also finally broke its previous all-time high in USD of $1900 in July last year. Gold prices subsequently rallied briefly to $2070 in August before consolidating over the past months.

We think this is still the early stage of a new gold cycle that started in 2016 rather than the end of it. Our gold price framework has predicted the recent moves very well (see Exhibit 2). In our view, gold prices overshot in summer and prices were no longer supported by the underlying fundamental drivers. This has now corrected. Given our views on where the main drivers in our model are heading, we think the risk to gold prices remains strongly skewed to the upside. While we think some downside risk remains, any large retracement will be short lived in our view. 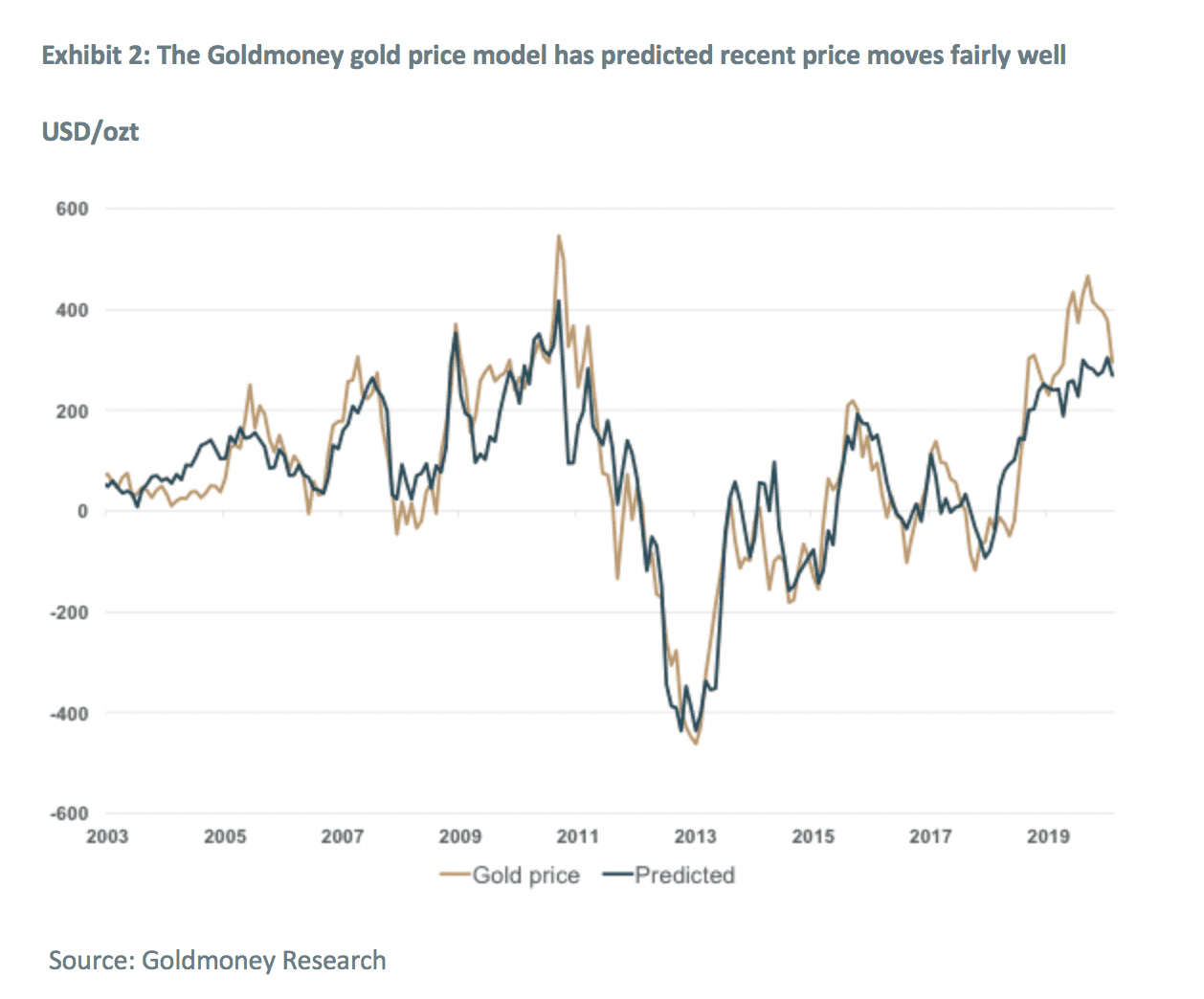 According to our model, this accounted for around $400/ozt of the gold price move in 2020. In contrast, falling longer-dated energy prices had a negative impact on gold prices of about $80/ozt. And while central banks continued to increase their gold holdings in 2020, they did so at a relatively moderate pace, which impacted the gold price only by around $10/ozt (see exhibit 3). 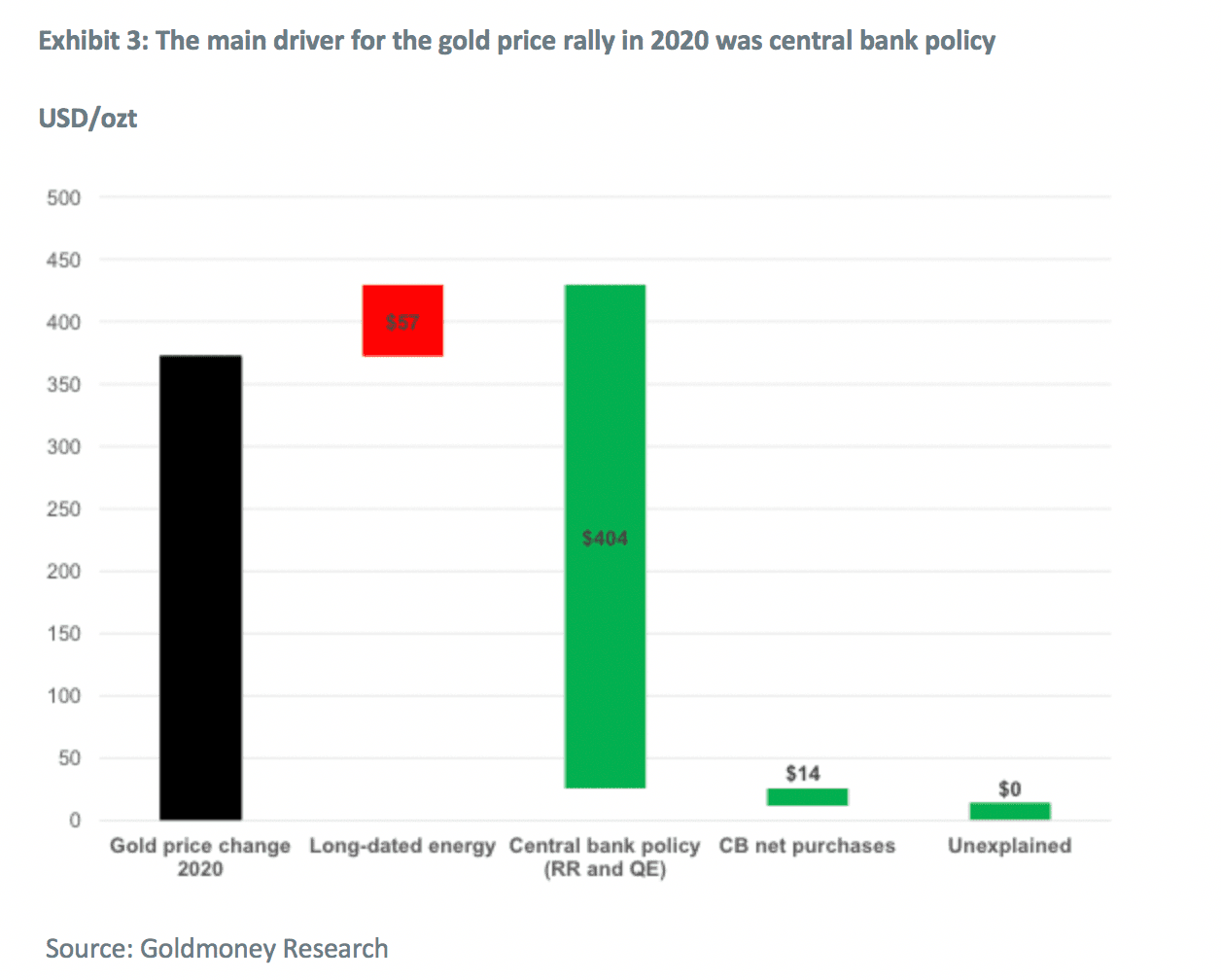 The current cycle will unfold over the coming years

We expect the risk for all drivers for the gold price to remain firmly skewed in favor of gold. Real-interest rate expectations are currently at their lowest point in history, but historical central bank action after a recession suggests that there is a lot of room to the downside. Longer-dated energy prices crashed as the global Covid pandemic unfolded, which will accelerate the energy supply crunch we have been expecting for the coming years. And there is no evidence that the long-term trend of growing central bank gold reserves is reversing anytime soon.

Real-interest rate expectations are a combination of long-term rates (10 year yields) and the markets long-term inflation expectations. Nominal interest rates are current at extremely low levels. The Fed funds rate has been slashed to zero and is likely to stay there for an extended period. The Fed itself is predicting that interest rates will remain at 0% for the foreseeable future (at least until the end of 2023). In the aftermath of the credit crisis, the Fed members have continuously revised their outlook for rate hikes further back as time progressed, and the terminal rate (long-term rate) expectations moved lower over time. We expect a similar situation to unfold this time. 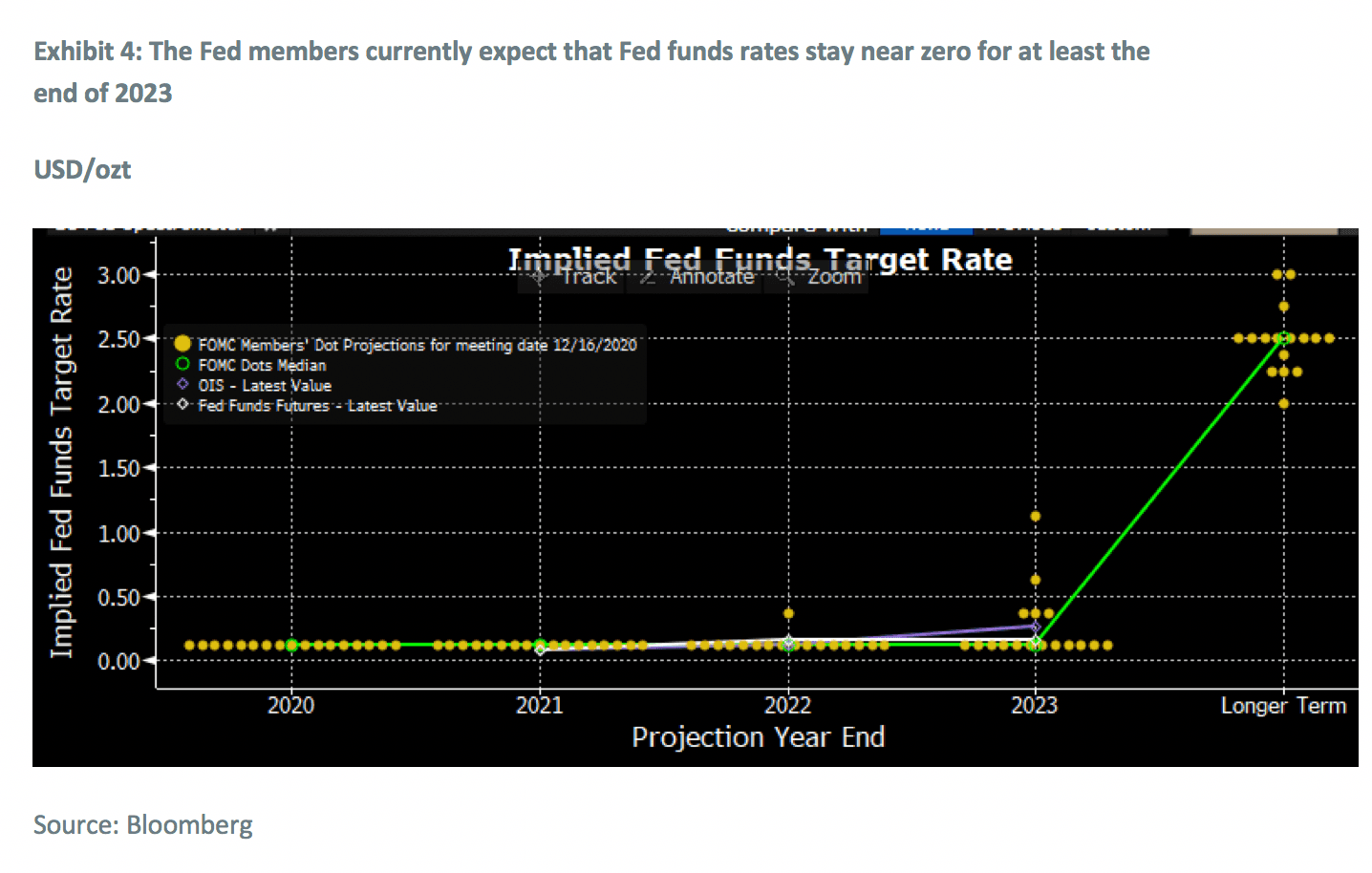 For gold prices, the nominal rates that matter are the longer-term yields. While the Fed directly sets the near-term rates, Fed policy has a strong influence on longer-dated rates (See Exhibit 5). 10-year treasury rates peaked in the early 1980 together with the Fed funds rate and have been gradually declining since.

The Fed has historically reacted to a recession by slashing near-term nominal interest rates (Fed funds rate) by about 5.5% on average. Once the economy recovered, the Fed raised the Fed funds rates, but never back to the levels prior to the rate cuts. Longer-dated rates have not been as volatile, but the overall trend was in line with shorter-dated rates.

In the aftermath of the credit crisis, the Fed began to directly target longer-dated rates by purchasing treasury bonds in an attempt to keep the long-term yield low. 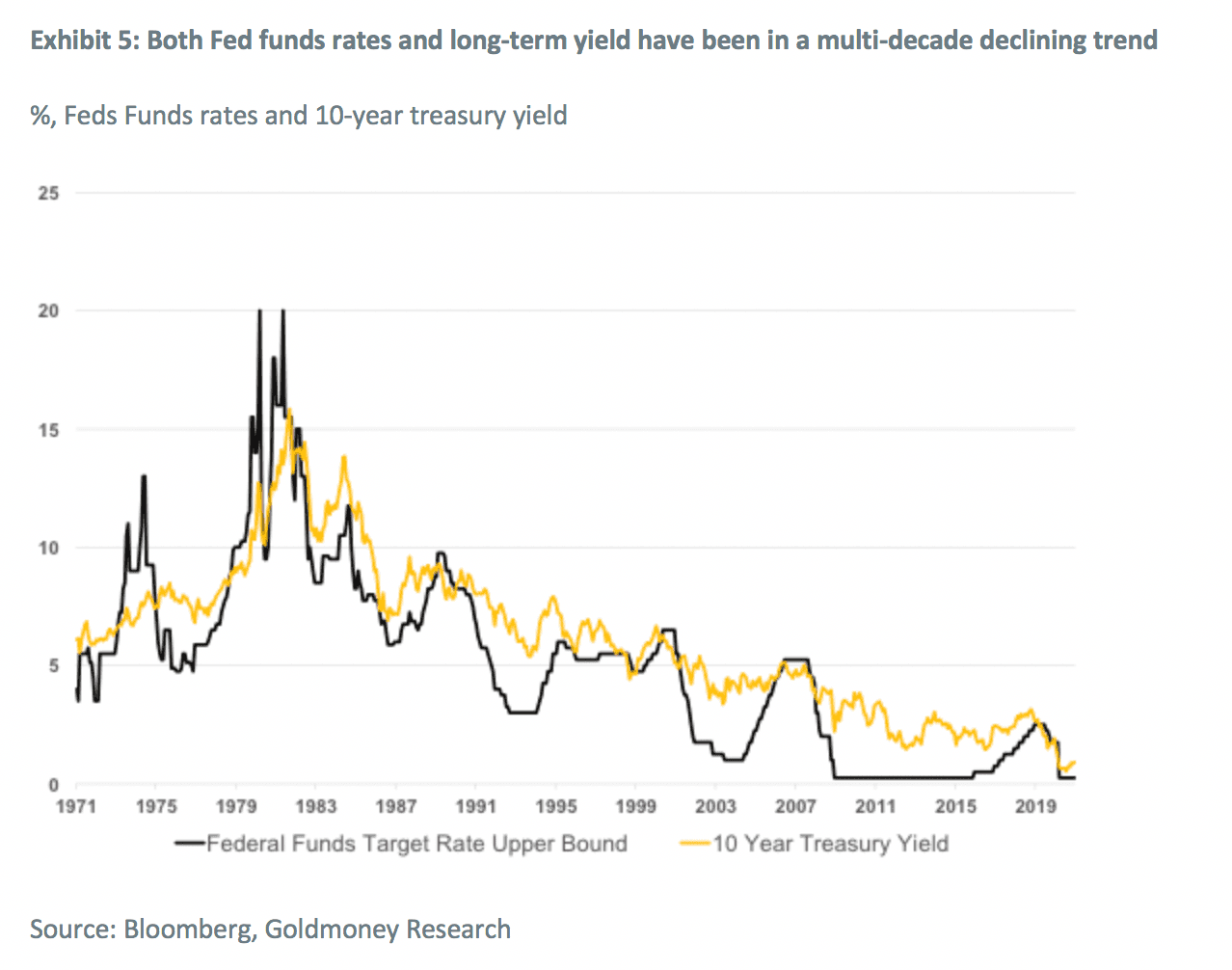 10-year treasury rates have thus moved from around 5% in 2007 to as low as 0.5% last summer. 10-year treasury yields have since recovered to 1.1%, which is still extremely low in historical terms.  Given the Fed’s own forecast for Fed funds rate and the continuing increase in the Fed balance sheet, we see little risk for a sharp spike in long-dated rates in the medium term. While there is a risk in the short term of rates’ spiking in a broader market correction, our expectation is that the Fed would intervene if rates rose to quickly. Any spike in nominal rates is therefore likely to be short lived. 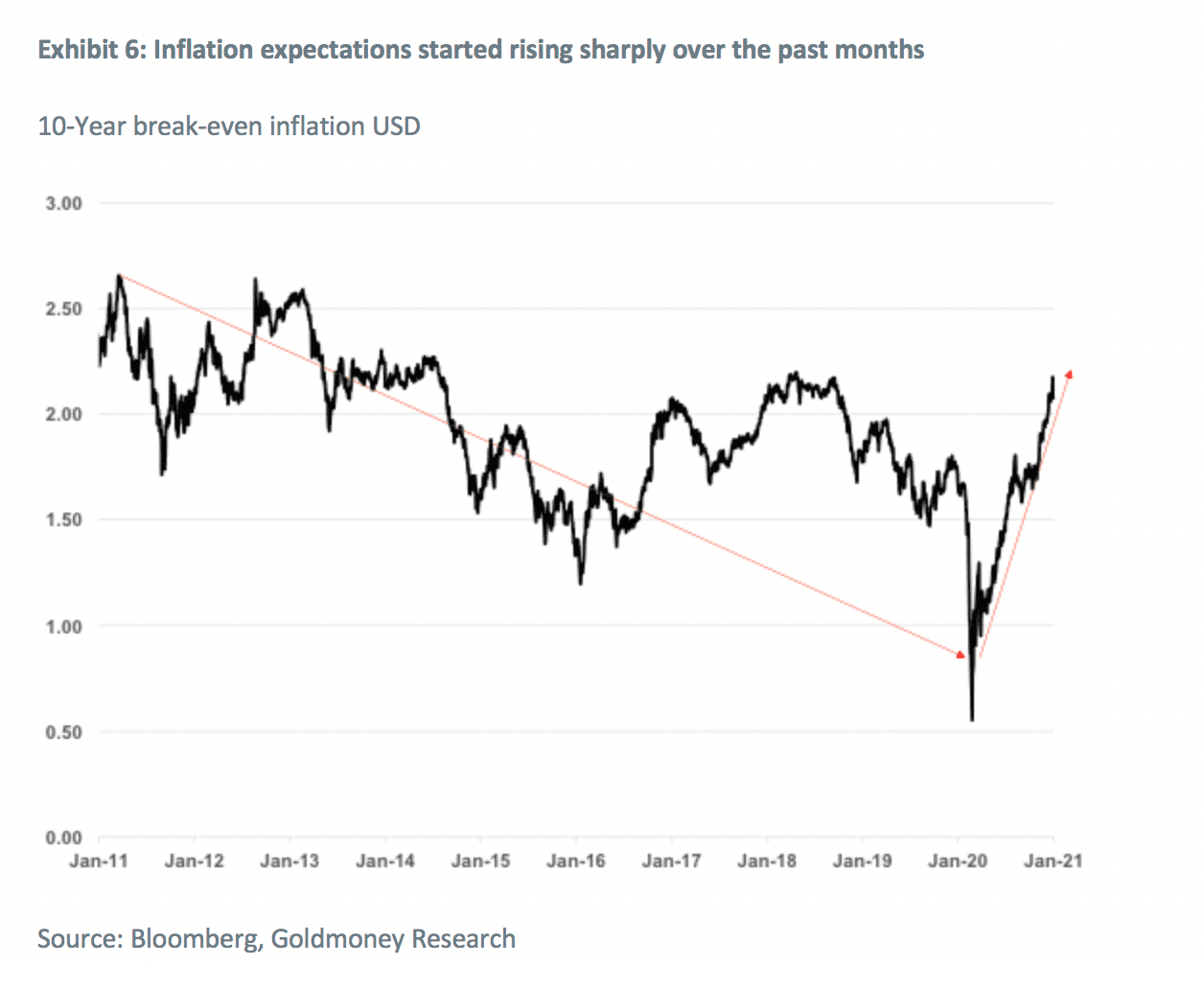 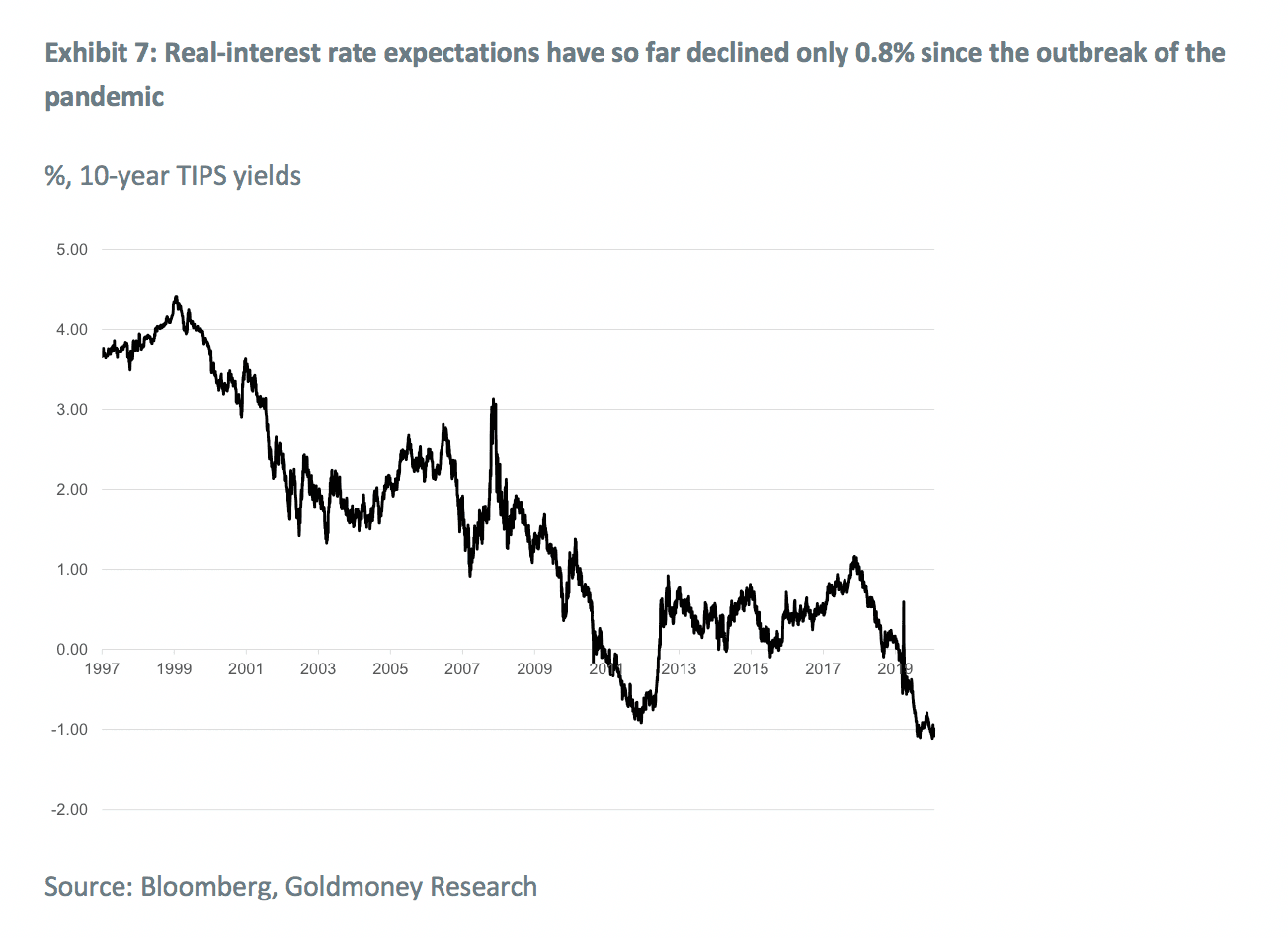 As nominal interest rates where already very low in early 2020, there was very little leeway for central banks to react by slashing rates. Instead, they accelerated their QE programs at an unprecedented speed. For example, it took the Fed seven years of QE to increase its balance sheet by $3.6tn, from $900bn in 2008 to $4.5tn by 2015. It took just three months to get from $4.3tn in March 2020 to $7.2tn in June 2020 (see Exhibit 8). While asset purchases have slowed down, the Fed has still been adding around $20bn per week to its balance sheets. 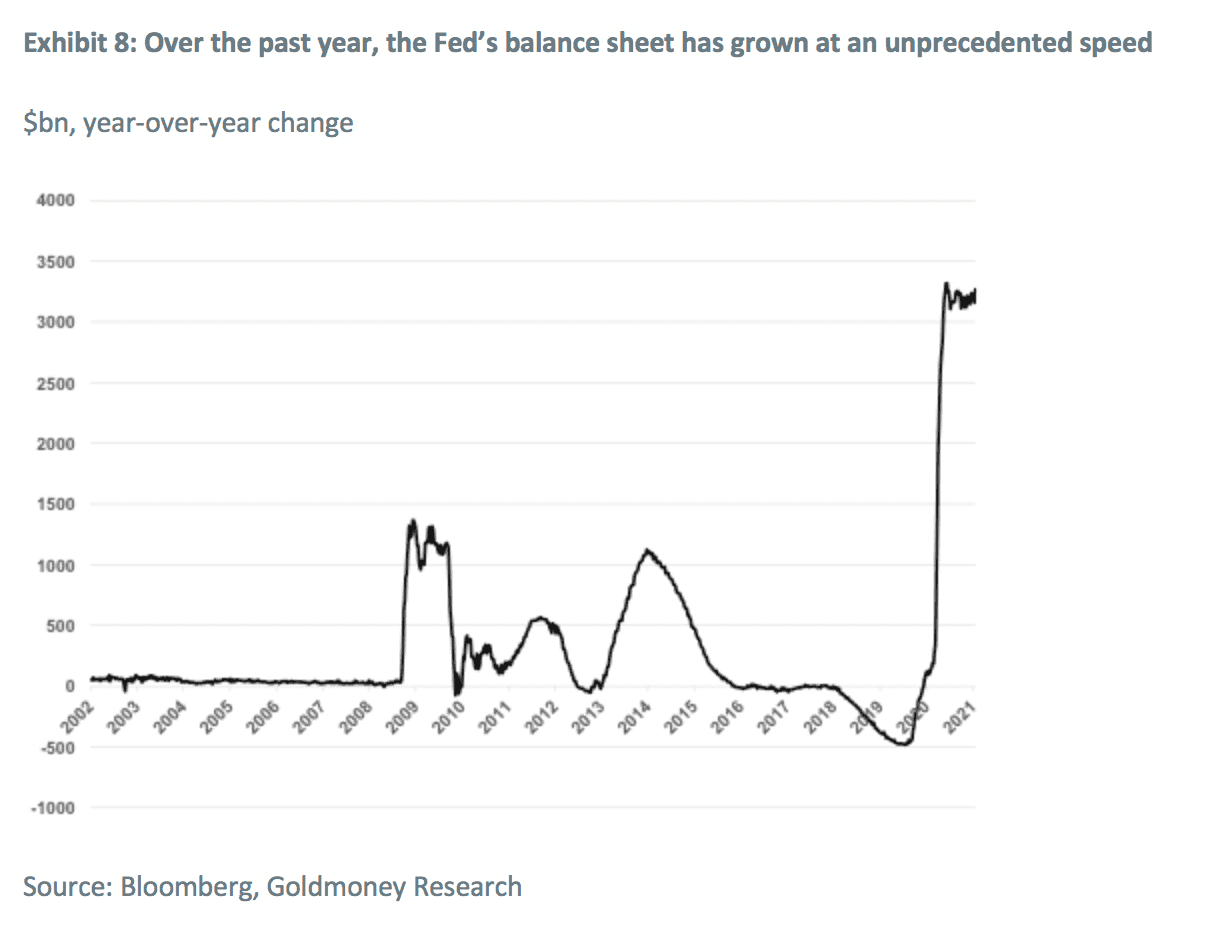 Our model tells us that gold prices so far have been trading in line with the level of real-interest rate expectations and QE. This may be surprising to some, as they have expected gold to have underperformed given the extreme environment we are currently in.

In addition to this, longer-dated energy prices have collapsed earlier last year as demand for oil and other energy commodities suffered an unprecedented decline. While longer-dated oil prices (and other energy commodities) have since recovered, they are still far below pre-pandemic levels (see Exhibit 9). Importantly, energy supply has also seen the largest contraction on record. While the demand impact is expected to be transitory in nature, the supply impact is likely to be longer lasting. This is a fertile ground for energy price inflation over the medium term. We explore this more in an upcoming report. 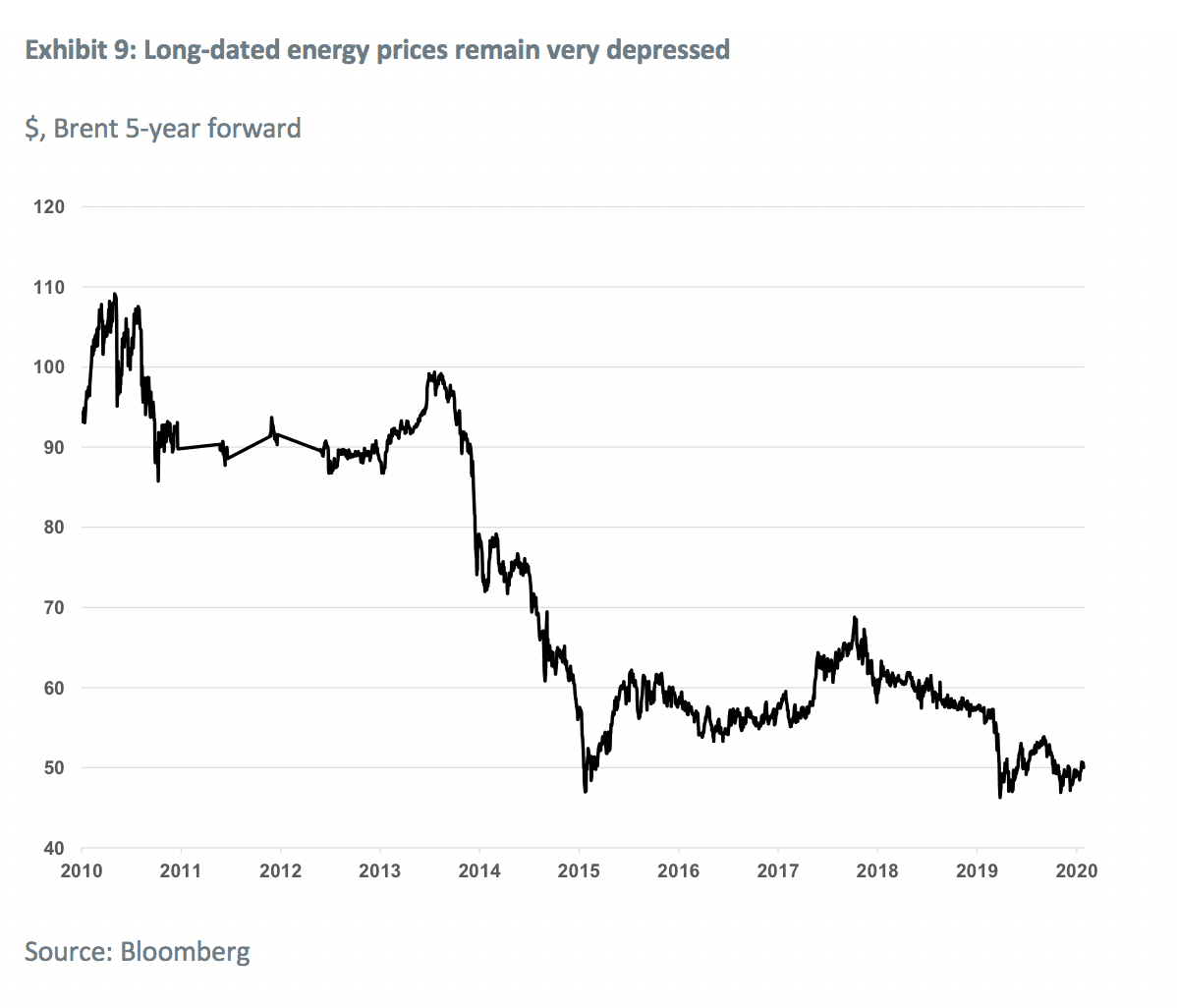 On net, we think we are still in the beginning of the current gold price cycle. While there remain some near-term risk from a spike in nominal rates (potentially triggered by a sharp correction in equity markets), we think central banks are ready to step in and act quickly, limiting the upside to nominal rates. The medium-term outlook for real-interest rate expectations and QE is very positive for gold in our view, and long-dated energy prices present some further upside risk.


[1] Interestingly, this was not as low as during the height of the credit crisis in 2008, when 10-year break-even inflation expectations fell as low as -0.02%.