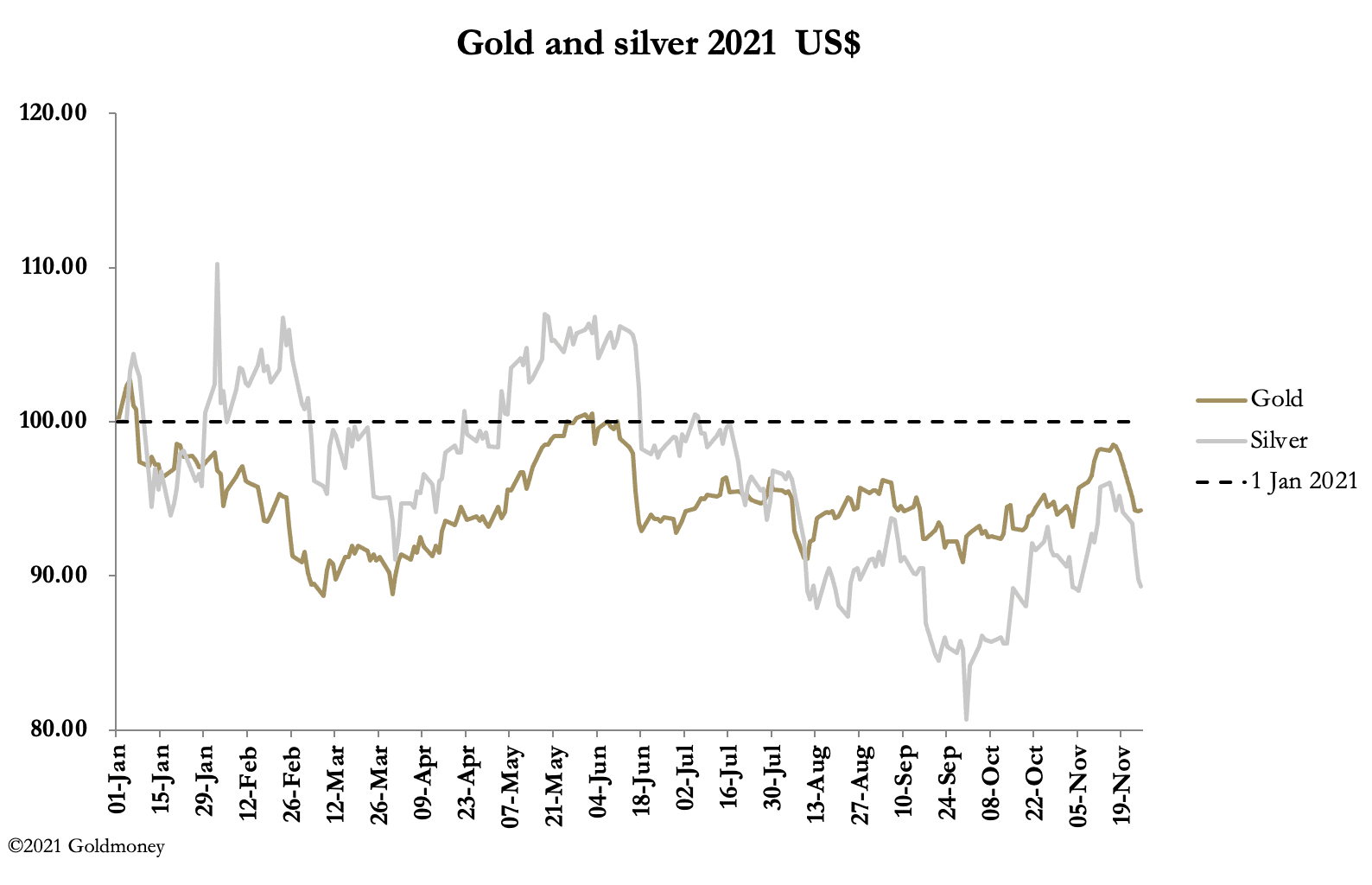 Gold and silver had a torrid week as the bullion banks drove gold under $1800 to force Comex futures’ bulls into closing their positions and to make as many December call options expire worthless as possible. Gold fell a net $32 from last Friday’s close by morning trade in Europe today to $1811, and silver fell $1.00 to $23.60.

Yesterday being Thanksgiving, the holiday played into the bullion banks’ hands. Turnover on Comex was heavy as an orchestrated bear raid took out long stops and reduced open interest by 64,110 contracts from the previous Wednesday’s high. Last week’s Market Report warned that this move was likely.

While bullion banks demonstrate their collusive power in the paper markets, they appear to be creating a problem for themselves in the physical. Since the end of August, Comex longs have taken delivery of 77.12 tonnes. And if we look at London’s vault statistics, we see that between end-August and end-October, vaulted gold has declined by 57 tonnes (4.98 tonnes of which have been withdrawn from the Bank of England). And in those two months, according to the World Gold Council, ETFs liquidated 40.7 tonnes. That’s 174.82 tonnes gone from the vault statistics. But to this we need to add the daily mine supply coming mostly into London or pre-ordered from LBMA member refiners. At roughly 50 tonnes per week that’s a further 400 tonnes, which if the bullion banks were getting them would add to vaulting statistics.

Plainly, while the retail investment market (ETFs) is net sellers, some parties are quietly accumulating large quantities of bullion, and it is not the bullion banks for their own account. This is important, because it is only five weeks before the Basel 3 net stable funding ratio regulations are applied to the banking members of the LBMA. Therefore, while the bullion banks appear to be in manipulative control of their paper gold liabilities, they are losing their grip of the physical market.

It would be wrong to suggest that the LBMA members’ year-end deadline requires full regulatory compliance. The point about the NSFR is it makes it more expensive for bullion banks to maintain derivative positions. It could be argued that taking money off the Managed Money muppets on Comex is so profitable that it is worth paying the Basel 3 funding penalty. But that will not be the only consideration facing banking executives and their treasury departments.

It is becoming increasingly obvious that the major central banks face an inflation problem that’s not going away. And in the last fortnight, much of Europe is re-entering covid lockdowns and restrictions, and only this morning it appears there is a new South African variant which is causing concern for epidemiologists. The combination is of rising prices and a further economic slump, at least in Europe. As a best guess, it will be big money in Germany, Switzerland etc. selling euros to hoard any bullion available.