The implications of a potential European ban on Russian oil imports

Apr 20, 2022·Goldmoney Insights
Russia is the world’s second largest petroleum exporter. About 5mb/d of crude oil and petroleum products are exported to Europe. A European ban on Russian petroleum imports would have an immediate effect on >1mb/d of pipeline imports. Moreover, 4mb/d of crude and products that currently go to Europe via tankers would have to find a new home, which would create massive problems for the global refinery system. Depending on the speed of the phase-out, we could see the loss of >3mb/d of Russian production near term. Over the long run, Russian production will likely decline due to the lack of western technology transfer.


On April 8, 2022, the European Union announced that it would ban all coal imports from Russia starting in August this year. While the total value of these imports is relatively small (about $4bn per annum), this will have large implications for both European and global coal balances. Coal is transported in bulk. So in theory, the Russian coal that used to be exported to Europe could be moved by rail and by sea to buyers in China and overseas. Europe then in turn could import the coal that used to be imported by these buyers. In practice, it’s a bit more complicated. Russian coal is generally of high quality (high calorific value or “high CV” coal) and the coal that would be freed up and shipped to Europe is of low quality (low CV), which is a problem for European power plants. What makes matters more complicated is that Japan is working on replacing their Russian coal imports too. The likely effect is a tightening of high-quality coal balances worldwide. And indeed, since the announcement has been made, low CV coal prices were falling but high CV coal prices are soaring.

However, the economic impact of a ban on Russian coal imports is trivial compared to a potential ban on Russian oil and gas. A ban on imports of Russian gas is currently viewed as the most difficult to deal with for European economies. Over the past 5 years, Russian gas imports accounted for about 38% of European gas consumption. Even in 2021, the year when Russia had massively cut its exports to Europe, it was still 32%. This can simply not be replaced by LNG imports over the short run. Thus European leaders have so far been quite resilient to calls for a gas import ban. In fact, the European Union passed legislation that forces gas storage owners to fill their storage to certain levels during the summer injections season, something that is likely only achievable if imports from Russia persist.

So far European policymakers were equally reluctant to ban Russian oil imports. However, more recently, it seems that European officials are drafting plans to phase out Russian oil and petroleum product imports. The most likely scenario is that oil imports would be phased out in stages, allowing existing contracts to expire and for European refiners to arrange for alternative supplies. It is also likely that waterborne crude and petroleum product imports would be banned first, as it is easier to replace Russian crude that arrives on tankers with other seaborne imports. Pipeline imports would probably be the last step, as many refiners depend on Russian crude from pipelines and are unable to replace those flows in the near and medium term, potentially ever. These refineries would simply become inoperable.

Europe consumes about 14mb/d of oil, most of which is imported. About 30-40% (5mb/d) of Europe’s petroleum consumption is met by imports from Russia (see Exhibit 1). 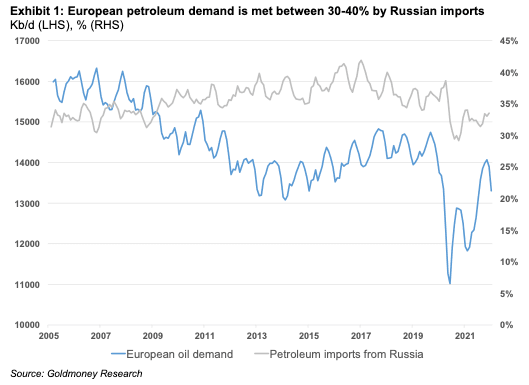 3.7mb/d of these imports come in the form of crude oil and refinery feedstocks while 1.5mb/d are finished products (see Exhibit 2). 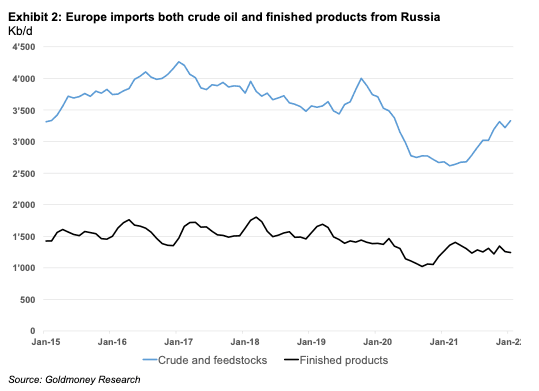 Russia is producing around 11mb/d of crude oil, which is 11% of the global supply. The country is processing close to 6mb/d for this crude in its domestic refiners and exports the rest. 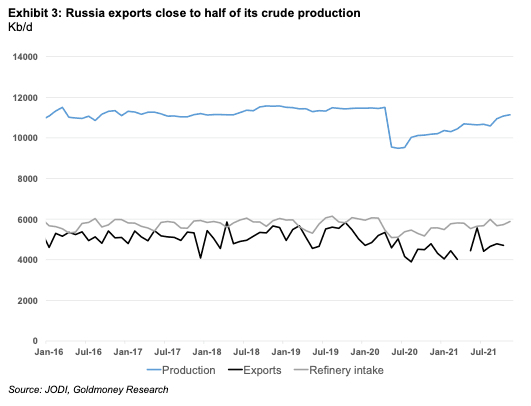 It then exports an additional 2mb/d of those products while the rest is consumed domestically. On net, Russia exports about 7.2mb/d of petroleum in the form of crude and products. All petroleum products are exported via tankers.  About half of the crude exports are seaborne exports, the other half is shipped via pipelines.

Only a small part of Russia’s oil production comes from the eastern part of the country.

On net, about 1.8mb/d-1.9mb/d of eastern production can continue to be exported to Asia, even with a European import ban in place. 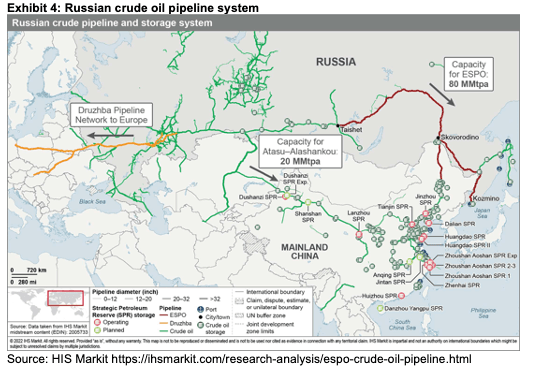 A big chunk of Russian production comes from the Western Siberian fields. That crude is either exported via the Druzhba pipeline to Europe or via tanker out of a seaport. 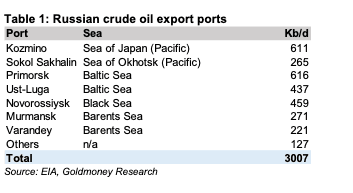 On net, in the event of a European import ban of Russian crude and petroleum product, Russia could technically still export all of its products, around 3mb/d of crude oil on tankers and 0.9-1mb/d via pipeline to China. For about 1.2mb/d of current pipeline exports, there is no alternative export route.

In reality, things would likely be a lot more difficult. First, Russia would have to find new buyers for all the seaborne crude it sends to Europe, the US, and potentially Asian buyers such as Korea and Japan. China is currently resisting taking more crude, but that could well be because the country’s appetite for oil is currently low given that one quarter of the population is in strict lockdown. Russian crude, especially the ESPO grade, is very popular among Chinese refiners. So if Russia loses traditional Asian buyers such as Korea and Japan, that crude might be picked up by China in the medium term. It’s probably much more difficult to find buyers for the crude that leaves the western ports. India has probably the refining capacity to take some, but it will be much more difficult for less sophisticated refineries in other emerging markets to switch grades. We therefore believe that especially in the first months of a European embargo, many Russian barrels would remain stranded. But that also depends on how quickly Europe would phase out Russian crude. With enough time, non-European refiners will find ways to run Russian grades.

We think it’s likely easier to sell the finished product cargoes that currently go to Europe to somebody else, but it will cost more to ship it further and it might create a real shortage of tankers in the medium term, which could also impact Russia’s effective export capacity of products.

We estimate that the initial loss of Russian petroleum would be in the order of >3mb/d in case of an immediate European import ban. This would subsequently decrease and we think the permanent loss is more in the order of 2mb/d. However, should Europe decide on a very gradual phase-out over several years, there may not even be any immediate hit and by the time the full ban comes into effect, Russia would have had the time to build out the seaborne export capacity and arranged for new buyers, who had the time to retool their refineries. Thus the price impact is extremely dependent on how fast the European Union is phasing out Russian crude.

However, we think that the long-term fundamental effects of any type of further sanctions are still very bullish. The sanctions that are already in place and target the energy sector will increasingly affect Russia’s ability to produce and refine crude. Russian refiners particularly are dependent on Western technology. So far the sanctions do not ban western companies to be active in the Russian energy sector. But sanctions on banks, and reputational risks will likely lead to a slowdown in technology transfer even if the sanctions are not tightened. A ban on Russian crude imports would likely also come with much tougher restriction on how western firms are allowed to operate in the sector. We thus have to assume that Russian production has now peaked and will inevitably decline long term, likely at an accelerated pace. New tougher sanctions on the oi industry will further accelerate this trend.

This comes at a time when global oil balances already look extremely tight over the medium term. As we have highlighted before (see Long term oil prices beginning to reflect the coming oil shortage – Part II, 8 April 2022), global demand will likely still continue to grow over the next 5-10 years, but supply will struggle. Non-OPEC production outside the US was already expected to decline in perpetuity, even before the events in Ukraine unfolded. At the time, the market expected Russian production to grow for some time. A decline in Russian production would thus greatly accelerate the declining trend in non-OPEC (ex US) output, which has the potential to create real oil shortages medium term.