Any reasonable saver who has seen the virtue of accumulating gold should be asking himself the crucial and necessary question of when to part with their gold, or at least when to reduce his allocation to precious metals. As with any other asset, the answer is simple: when it becomes overvalued.

Valuing gold however is no easy task. Most portfolio managers and investors don’t even try, or attempt to mistakenly apply to gold the same models used for commodities, ignoring gold’s 65-1 stock-flow ratio which sets it apart from most commodities, at least as far as the impact of annual production on supply is concerned. Gold has no yield, no credit rating and no P/E ratio. The correct way to value gold, as we’ve argued before, is to compare it to other currencies.

That is precisely what James Turk’s Gold Money Index does. It pinpoints the exact historical points at which gold has been in a bubble and definitely overvalued, thus proving the perfect tool to answer that pressing question: when do I sell my gold?

The Gold Money Index has been spot on in pinpointing an overheating gold price and warning cautious investors to exit gold. It will prove an extremely useful tool for current gold savers to be able to determine when gold is in a bubble, not just based on anecdotal evidence or ever-changing headlines and opinion pieces, but based on the numbers. When the price of gold is twice the Fair Gold Price as determined by the Gold Money Index, like it was in 1980, it will be time to sell (or spend) your gold and turn it into productive investments that are undervalued. 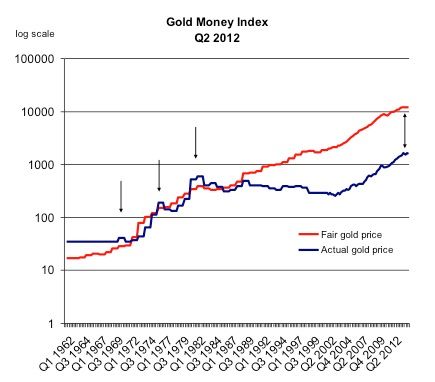 However as you can see in the chart above (note the logarithmic scale) the message that the Gold Money Index is currently sending us is precisely the opposite: gold is incredibly undervalued as central banks and governments continue to accumulate huge quantities of dollars, euros and yens – ballooning their FX reserves into uncharted territory. Remember that the Gold Money Index is the ratio of central bank FX reserves to the gold reserves of those same central banks. In other words: how much paper they have in relation to the gold that they hold. In recent years the latter has been steadily dropping while the former has exploded. It is not surprising that some countries, like Venezuela or Germany, are calling for that gold to be stored closer to home, where they can keep an eye on it. 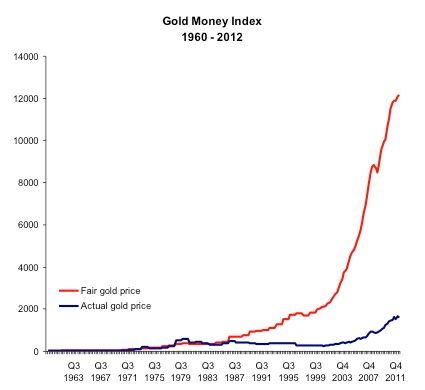 The chart above shows precisely this colossal deviation from the mean since the 1980s and the extent of the currency bubble that is even now growing at an exponential rate with plenty of help from central bankers around the world. In the past 10 years the amount of dollars, yen and euros held by these central planners has multiplied five-fold. It has doubled since 2007, whereas of course the gold in their vaults has held steady at under 1-billion ounces (28,065 tonnes or 902 million troy ounces as of the latest WGC report), with a net flow from western countries to the BRICS (Brazil, Russia, India, China, and South Africa).

As long as this unlimited money creation from the world’s mega-printers continues unchecked and the price of gold is suppressed by the use of “paper gold”, the gap between gold’s fair value and its current price will continue to grow, leading to a huge undervaluation. 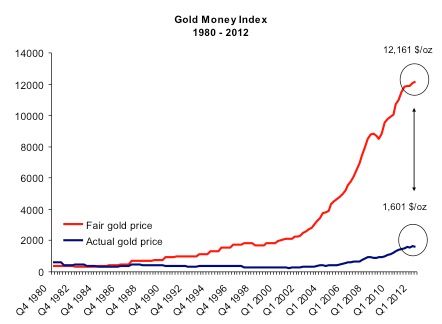 Of course some might think that the situation shown by the chart above, which looks at the last 30 years, is “the new normal” and that “this time it’s different”, that the world has changed its fundamental nature since Nixon closed the gold window in 1971 and that gold will never again return to its place at the heart of the world’s monetary system. They might argue that the reversion to fair value that the Gold Money Index shows happened again and again over the past centuries need not happen again. That unlimited money printing will be alright this time because our central planners have learnt from their previous mistakes.

We might trust a little more in these arguments if monetary central planners were not doing exactly the same things that have lead to disaster in the past and using the exact same excuses, almost word for word, of their ill-fated predecessors in the art of bubble-blowing.

For those that would rather see the numbers and make a rational decision, the Gold Money Index might prove an invaluable tool.