The Fed gets creative

According to a story in Wednesday’s Wall Street Journal, the US Federal Reserve is considering buying long-term Treasury and mortgage bonds in return for deposits held at the Fed.

There has been no comment from the Fed and the story might have been no more than a trial balloon, in which case Bernanke and Co may be considering skewing the yield curve so that long-term bonds are less attractive than the time-preferences set by the market.

The deal the Fed appears to be thinking of is a reverse-repurchase agreement (a reverse repo), whereby it buys long-maturity bonds financed by credit drawn from the commercial banks. The important monetary distinction is that unused bank credit funds the deal, not hard cash. The Fed can always set the terms so that it is an attractive proposition for its counterparties. This being the case, upward pressure on short-term rates will be minimal while the Fed can manage long-term rates lower. And by buying bonds with long maturities, asset prices generally benefit which is why stocks rose on the story.

More intriguing are the reasons why this option might be being explored. The answer is probably found in the rising yields of longer maturities, illustrated by the US 30 year Treasury yield shown below: 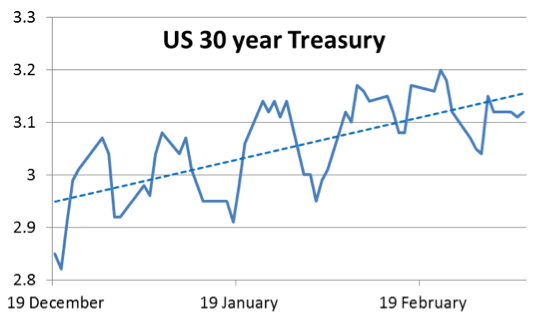 While the Fed has been able to anchor short-term rates, long-term rates have started to rise. This is perfectly normal and ordinarily nothing too much to worry about when the economy shows early signs of improvement. Importantly, it suggests we are moving into a more inflationary environment which rules out raw quantitative easing as a policy option, because printing money would now quickly undermine the dollar. Therefore, it is in the Fed’s interest to seek a disguised form of quantitative easing that expands bank credit and not raw money.

There are two underlying motives that come to mind other than just bolstering asset prices. Firstly, on balance central bankers are still worried about a possible deflationary collapse, and while there may be early signs of economic recovery, commercial banks remain risk-averse when it comes to lending. Also low mortgage rates are seen as vital to the housing market, which is still mired in its own debt-deflation: this is why the Fed might want to buy mortgage debt as well as Treasuries. Secondly, there is the cost of government borrowing, and any rise in interest rates wrecks budget deficit assumptions. These are already alarming enough. Furthermore, US Treasury debt maturities are skewed heavily and dangerously towards the short-term: hence the importance of keeping long-term bond yields low, so that the Treasury can issue longer-dated bonds.

To summarise, the Fed is still trying to avoid deflation and it needs to assist the Treasury by buying long-term debt at artificially low bond yields. Growing public concerns about the inflationary effects of quantitative easing calls for a different approach, perhaps using reverse-repos funded by an expansion of bank credit.

While this might satisfy some, all that happens is that the engine of monetary inflation becomes expanding bank credit, rather than quantitative easing: the long-term effects on prices are exactly the same.