The bulls in Spain struggle in vain

As the first “too-big-to-fail” euro-periphery nation to have caught fire, many see Spain as the pivotal battleground that will determine the eurozone's future.

Massive money printing by the European Central Bank is the only realistic way to fund a Spanish bailout, but this will unleash a giant moral hazard: why should governments in other eurozone countries persist with unpopular austerity measures once the Spanish government has been saved by the boys in Frankfurt? A slippery slope indeed, and one that leads to currency destruction and a distinct sense of dejá vù for Germany.

If Spain is not bailed out, the political bonds that bind the country to the euro could shatter as a result of popular anger and violence directed against Brussels and its allies in national and regional administration. This a variation on the Catch-22 situation facing debt-burdened economies all over the world. ECB President Mario Draghi has promised to do “all that is necessary” and sworn by his name and his power that “it will be enough”. However this will surely drive more Bundesbankers to pine for the D-Mark, as several well-placed sources have recently indicated.

In this very interesting video on the Spanish economic crisis ¿Dónde está mi dinero? (Where is my money?), Marion Mueller, María Blanco, Juan Castañeda and Miquel Roig discuss our current predicament and the broader issues surrounding banking, money and debt. They also ask random members of the public in Madrid these same questions, giving us a very good idea of what the Spanish man or woman on the street thinks are the causes and who is to blame for the crisis.

Unfortunately, despite worthwhile education efforts championed by this company and others, and even though the Spanish public is much more informed about financial issues than was the case five or six years ago, too little has changed. The same people are in charge and the same ideas that brought us here still prevail. Economic policy is still dictated by technocrats, mostly of the Keynesian persuasion with a pinch of Monetarism for “variety”. Their idea of “free market reforms” is raising taxes hard and fast. Politicians of every party still see a balanced budget as an unattainable myth instead of a desirable target.

“Austerity” is decried from every corner even though local, regional and central government spending is still higher in 2012 than it was in 2007, at the peak of Spain’s real estate bubble and tax revenue. Monetary policy is still centrally planned from Frankfurt, and central bankers are not only not blamed for their part in the boom and bust, but seen as heroes and saviours or at worst as a tough-love father figures. As this is the case in Spain, so it is true of many other developed countries.

And what of those who actually warned of what was coming and called the crisis in 2006 and 2007? Yes they’ve gained some notoriety, but their voices are very far from being heard or even tolerated in “polite” circles at economic forums. This dynamic is discussed in the documentary Why the great recession?, which features quite a few Spanish Austrian school economists.

The Spanish crisis in brief: stimulated by its entry into the eurozone and record-low interest rates, Spain grew at a healthy pace from 1999. The dotcom bust in 2000 focused investors’ attention on the “safe” real estate sector. Spain’s economy expanded, and house prices rose dramatically from 2002, reaching unsustainable double-digit levels of appreciation in 2005. In 2007 prices started to top, and in 2008 the bubble burst as the immense leverage that had fuelled the bubble started working in reverse, multiplying losses as prices declined.

Spain’s main stock index, the Ibex35, reached a high of almost 16,000 in October 2007. Five years on and it now stands at 7,000. If experience of other bubbles is any indication, it could easily continue to slide to 2002 levels or, if we look at a worst-case bubble-popping scenario, might bottom out at around 2,000 (an 88% decline). If the eurozone breaks up the latter scenario will be very likely.

Spanish house prices will probably continue to decline until they reach pre-bubble levels. However this decline continues to be impeded by the two-pronged influence of artificially suppressed mortgage rates and Spanish banks’ reluctance to mark their real estate inventory to market. Most of this stock was actually acquired by banks and “cajas” (savings banks) when the developers that they had lent to went bankrupt. The decision to price these houses and land at inflated levels is what has allowed Spanish banks to keep up appearances for the past three years, when by honest accounts they were insolvent. 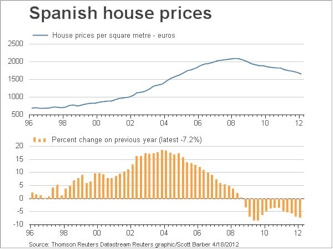 It is the banking bailout that will, as it did in Ireland, reveal the falsehood of Spain’s comparatively solvent national finances. That 70% government debt-to-GDP ratio that lets Spanish finance ministers sleep soundly at night will evaporate the instant the government decides to save the banks at the expense of taxpayers. In a clever bit of haggling, or perhaps of propaganda, Spain’s prime minister is trying to sell the bailout as a European bailout of Spanish banks. This is a smokescreen that will very soon clear. At 100% debt-to-GDP, paying 7% or 8% interest on sovereign debt is a killer blow.

So barring some drastic change of heart that leads Spanish politicians to balance the budget, thus making the “risk premium” and bond vigilantes irrelevant, Spain will fall and with it the eurozone as we know it. Any intelligent observer should be considering post-euro scenarios and planning the best wealth-protection strategy. It won’t be the end of the world, but clearly those with some gold tucked away will weather the storm much better than those it catches unawares.

Last week several supermarkets in southern Spain were assaulted by communist protesters who “expropriated” a few hundred kilos of food in a symbolic move. The same protesters have promised to occupy land, houses and businesses to demand an end to government austerity. As the crisis progresses and capital drains from Spain to the euro-core countries, we can only expect this example to spread and more “Robin Hood” supermarket raids to take place. At the same time new restrictions on cash transactions have lead many to speak of an impending “corralito” and capital controls.

These attacks on property rights, both from governments and mobs, cannot fail to make the situation even worse. Secure property rights are a necessary condition for savings and investment, and so indispensable for capital accumulation and economic growth. Unfortunately we come full circle to the question asked in the first video: “where is my money?” The answer is unsettling: it is not your money. It belongs to the bank that you gave it to, the government that can tell you what to do with it and, in the final reckoning, it belongs to the ECB that has stamped its name on it and can create as much of it as it wants through the printing press. Property is control and your control over “your” euros is extremely limited, while government control over them is extensive. Gold and silver on the other hand…