That US debt ceiling and the Fed

We are now into a second week of a partial Federal Government shut-down, which is causing considerable concern, centred on the Government’s ability to finance its debt and pay interest without a budget agreed for the new fiscal year. Should this continue into next week and beyond, the Fed will have to enter damage-limitation mode if the Treasury cannot issue any more bonds because of the separate problem of the debt ceiling.

Most likely, QE will have to be switched from financing the government to buying Treasuries already owned by the private sector. Any attempt to reduce the monthly addition of raw money will simply result in bond yields and then interest rates rising. And indeed, already this week we have seen yields on short-term T-bills rise in anticipation of a possible default. The market is naturally beginning to discount the possibility that the Fed may not be able to control the situation.

The T-bill issue is very serious, because they are the most liquid collateral for the $70 trillion shadow banking system. And without the liquidity they provide securities and derivative markets, we can say that Round Two of the banking crisis could make Lehman look like a picnic in the park.

This is the sort of event deflationists have long been expecting. According to their analysis there comes a point where debt liquidation is triggered and there is a dash for cash as assets collapse. But they reckon without allowing for the fact that deposits can only be encashed at the margin; otherwise they are merely transferred, and only destroyed when banks go under. This is the risk the Fed anticipates, and we can be certain it will move heaven and earth to avoid bank insolvencies.

Furthermore the deflationists do not have a satisfactory argument for the effect on currency exchange rates. Iceland went through a similar deflationary event to that risked in the US today when its banking system collapsed and the currency halved overnight. Today a dollar collapse on the back of a banking crisis would also disrupt all other fiat currencies, forcing central banks to coordinate intervention to conceal the currency effect. This leaves gold as the only true reflector of loss of confidence in the dollar and therefore all other fiat currencies.

Those worrying about deflation ignore the fact that it is the fiat currency that takes it on the chin while gold rises – every time without exception. This was even the experience of the 1930s, when Roosevelt suspended convertibility, increased the price of gold by 40% to $35 per ounce, and the banking crisis was contained.

Of course there is likely to be some short-term uncertainty; but against the Fiat Money Quantity (FMQ) gold is down 30% compared with the price pre-Lehman crisis. This is shown in the chart below. 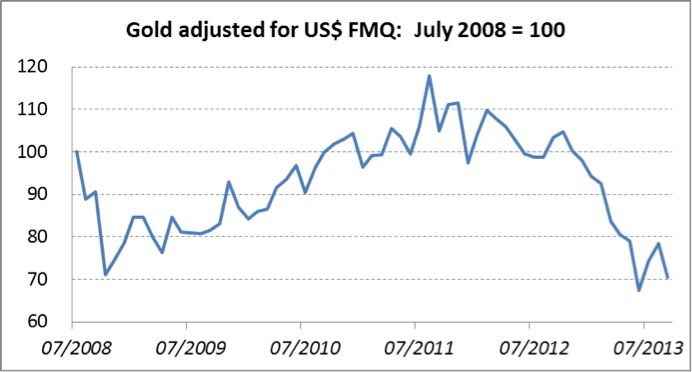 With gold at an extreme low in valuation terms, current events, whichever way they go, seem unlikely to drive it much lower. A wise man perhaps should copy the Asians, who know a thing or two about paper currencies, and are buying gold in ever-increasing quantities.