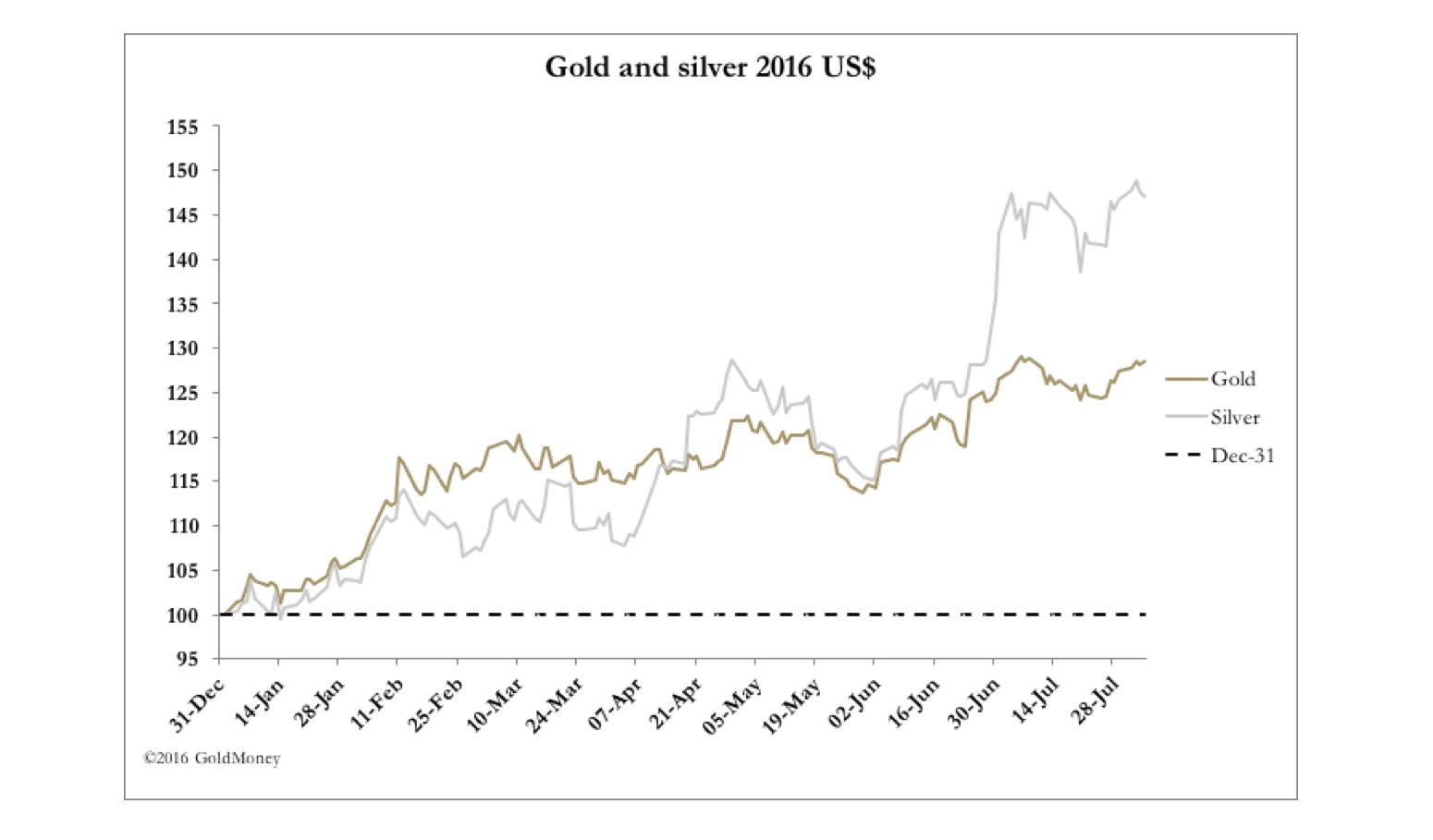 Gold and silver resumed their march upwards, with gold challenging the early July high at $1367 on Tuesday.

Currencies were being driven by yen strength/dollar weakness, benefiting gold in dollar terms. After a pause in gold’s upwards momentum on Wednesday, yesterday (Thursday) the Bank of England announced its quarter-point base rate cut, £70bn in extra quantitative easing, and assistance to the banks for lending amounting to a further £100bn. More on this below.

Silver also performed well, but interestingly its strength seemed to come during Asian trading hours, unlike gold’s which came during US trading hours. Could it be that gold demand in Asia is being replaced by demand for its cheaper cousin, while in the West we are obsessing about monetary policies, and the increasing likelihood of a Eurozone banking crisis?

Anyway, the gold/silver ratio has fallen significantly, which is shown in the chart below. 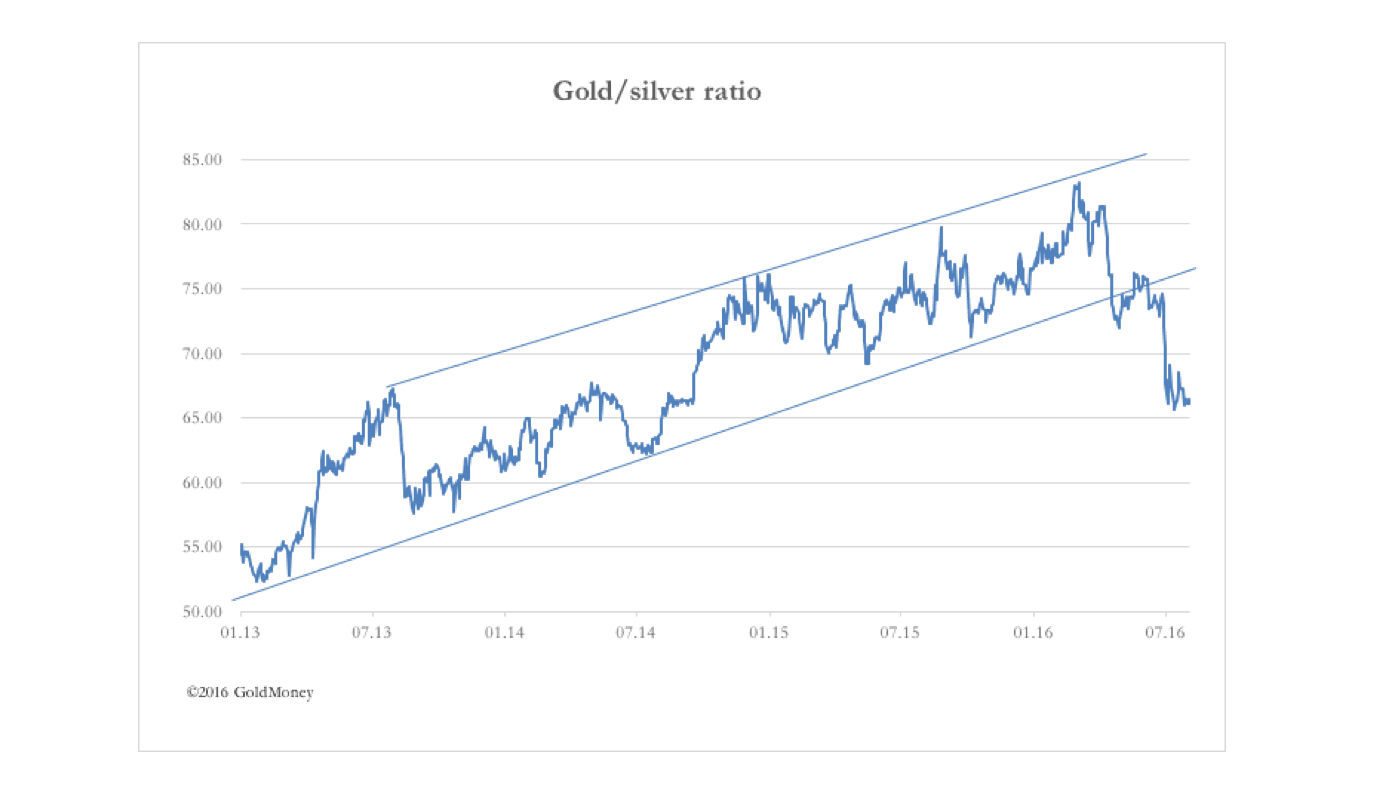 Silver has now caught up with gold, in terms of performance in this bull market. We are a long way from Isaac Newton’s ratio of 16.5:1, which is consistent with its role as money being entirely removed from the financial system.But the peak at 83 times in March was in retrospect a serious mispricing. Silver’s subsequent action can be read as confirmation that there is a fundamental change in price direction for gold, in which case it needed to catch up.

So while gold has risen 28% so far this year, silver is now up 47%. Assuming gold rises further, we can expect silver’s outperformance to continue accordingly.

As stated above, the Bank of England cut interest rates by 0.25%, introduced a new round of QE split £60bn into government bonds (gilts) and £10bn into corporate debt. Furthermore, the Bank is making available a further £100bn to the banking sector to lend to industry.

The intention is to bolster nominal GDP by forcing more money into the economy. Whether this is advisable or might work need not concern us here. What does concern us is that of the big four central banks, only one, the Fed, is still talking up interest rates, though that prospect is receding into the future. The fact that the BoE has is now going into reflation overdrive leaves the Fed isolated.

It is becoming clear that the major central banks are all very concerned over economic prospects. And anyone observing the state of European banks must be acutely aware that they are standing on the edge of a deep chasm marked systemic crisis.

Last weekend’s European Banking Association’s stress test announcement did not help, raising more questions than it answered. Apart from a few obvious basket cases, such as Banka Monte dei Pashi di Siena, it was a whitewash. The result was European bank shares lurched lower, led by the Italians.

European banking developments are becoming a serious issue for gold investors. It would be wrong to think that the ECB and the other European central banks will fail to rescue banks one more time, because they have the tools to do so. What will concern markets is the monetary cost, and the confirmation that much of the reason for hyper-expansionary monetary policies is a planned approach to containing systemic risk.

This brings us back to the Fed, and the increasing likelihood it will find excuses not only to not raise the Fed Funds Rate, but even to ease further. It is this possibility the gold price has could begin to discount, and gold investors would be advised to watch developments here very closely.