Market Report: Squeeze on the swaps

Gold and silver were not much changed on a dramatic week. In European trade this morning gold was down $5 at $1690, and silver was down 28 cents at $15.12 from last Friday’s close. There is still a large gap in the performance of gold and silver on the year so far, with gold up 12% on balance and silver down 16%.

This gap says it all: the problem is gold, with the bullion banks’ trading desks net short and unable to close their positions. The last commitment of traders’ report (7 April) showed swap traders (aka bullion bank traders) net short of 165,678 contracts, illustrated in our next chart. 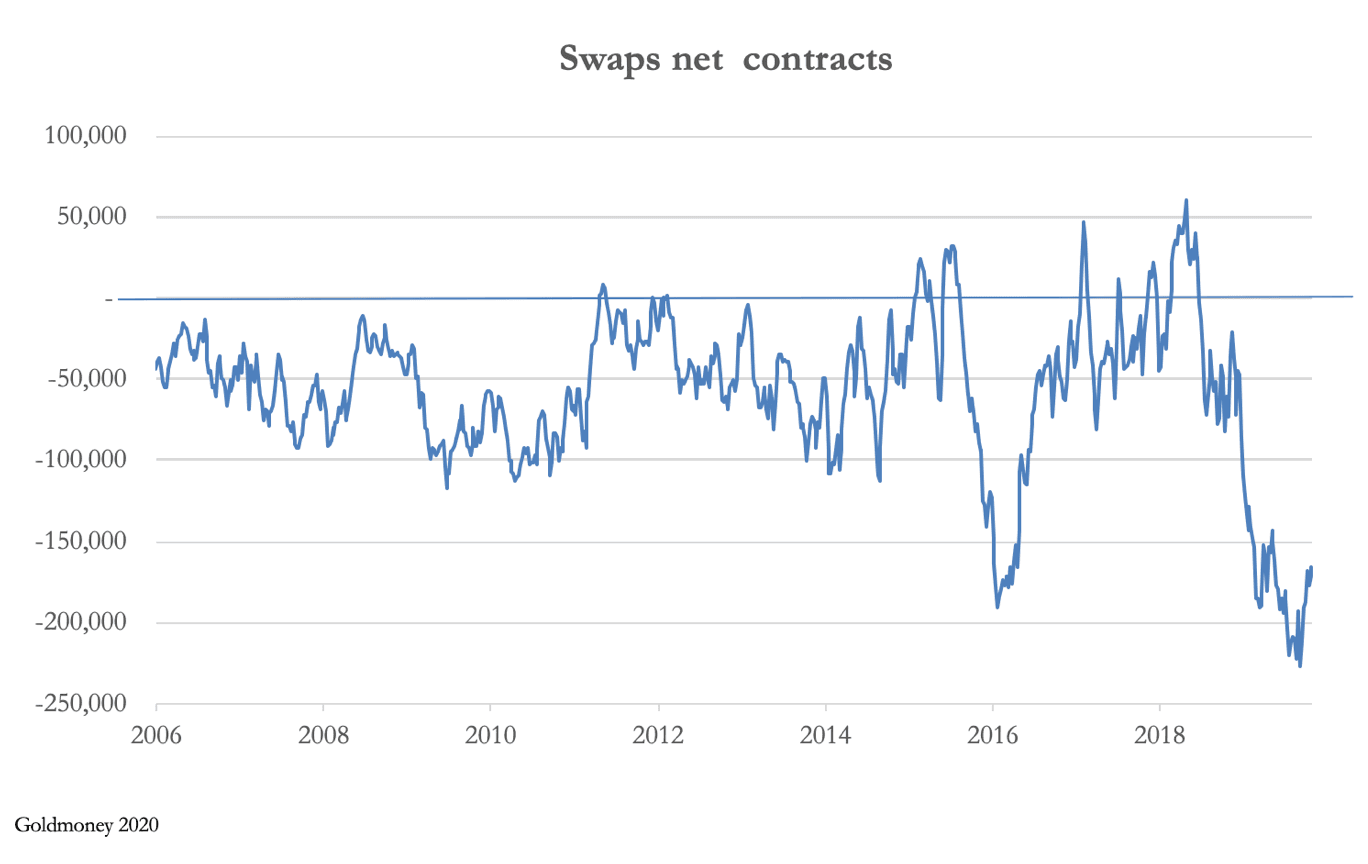 We wait with keen interest for an update tonight, but net shorts seem unlikely to have reduced to less than 100,000 contracts, historically high with only two exceptions: July 2016 when gold rallied $330 from an extremely oversold position and following the dramatic run that started in October 2018 to the present day. Our next quest is to identify whether it is a widespread problem, or one concentrated in just a few bullion banks. And here we note that the four largest traders were net short 176,658 contracts, and the second four net short 64,327. This indicates that one or more large traders have been badly wrongfooted rather than shorts being evenly spread over all trading desks.

This being the case, the extraordinary gyrations in recent weeks where the gold price fell from $1703 to $1451 before rising to $1748 represent a failure of coordinated action to rescue one or more banks systemically important to gold derivative markets. Unusual premiums in the Comex active contract over London spot confirm the seriousness of the situation. Our next chart plots Comex open interest and the gold price, showing the same story in their divergence.

Normally, open interest and the gold price move in the same direction. But since January, when open interest peaked and then collapsed to current levels, the gold price rose, at one point up nearly $200 on the June contract. The viciousness of the bear squeeze on market makers and bullion banks is truly mighty.

The active June Comex contract spent the week trading at a substantial premium to London spot, though it eased this morning from $40 plus to about $15. However, we shall have to wait and see whether this easing follows through in New York. And one must not rule out a second attempt by bullion banks to square their books by taking down prices.

In more general news, the authorities everywhere now recognise the economic damage inflicted by the lockdown is considerably more serious than earlier estimates, and with businesses rapidly running out of cash the imperative is end lockdowns. Unfortunately, no one has any deliverable idea how to achieve that objective, and particularly, President Trump in his election year is pushing for an early return to normality.

Infinite inflationism has temporarily been driven from the headlines by hope that business normality will return soon. It seems unlikely.