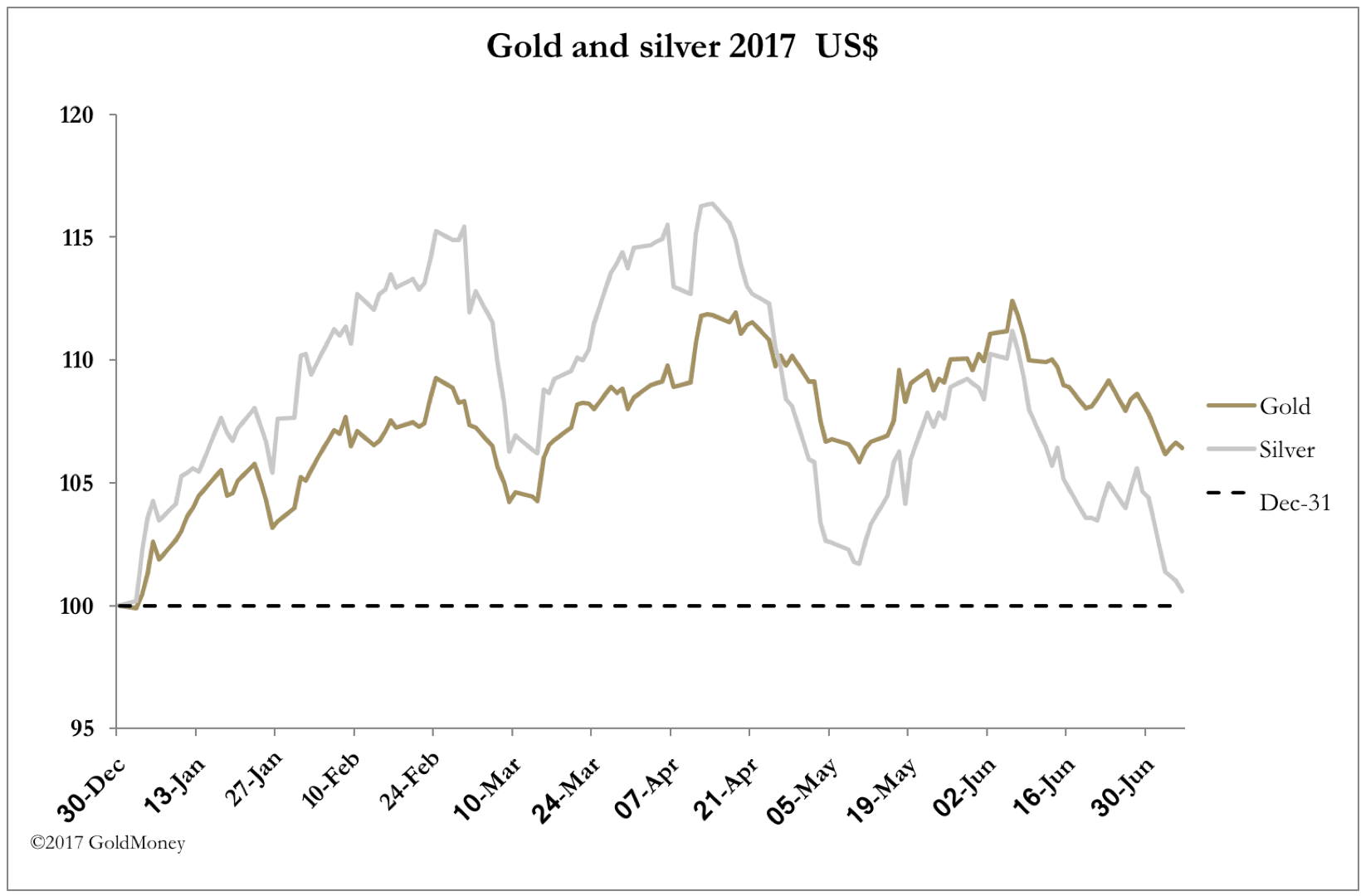 Gold and silver continued to drift lower this week, with gold falling $20 from last Friday’s close to $1220 in early European trade this morning (Friday), and silver by 75c to $15.87. At this level, silver has lost almost all the gains of 2017, though prices bottomed last December.

The fall in prices has continued after the end of the half year, when the bullion banks have had a history of suppressing prices to window-dress their books. Doubtless a reason will be concocted to justify this price action, and favourite must be the deflationary effects of the Fed running off its mega-balance sheet. But this is to misread the current fragility of the system. We can state categorically that the US and global economies are simply debt junkies, needing increasing amounts of debt, or they die. Does anyone seriously think that the Fed and the other central banks will let this happen?

The true explanation for what is happening is illustrated in the next chart, which is of the short positions in silver futures on Comex in the managed money category. 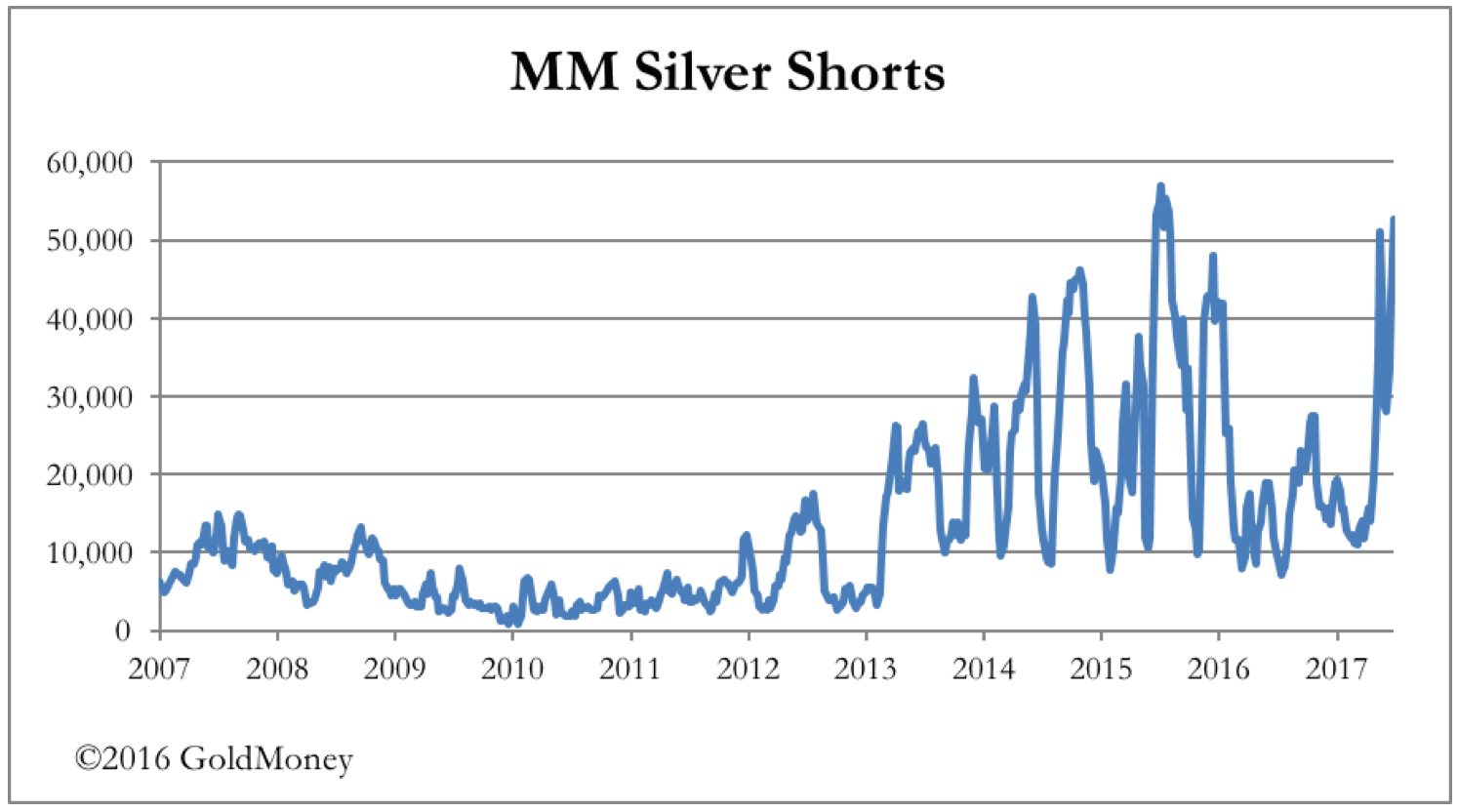 This was the position on 27 June, when silver was at $16.69. Since then, the speculative bears will have most likely increased their shorts, possibly taking them beyond the record levels seen exactly two years ago on 7 July 2015. The position is similar in gold, but not nearly as marked.

The difference between then and now is that silver’s Open Interest is about 10% off its highs, so while speculative shorts are high, the longs have not tapped out. It will be interesting to see this week’s Commitment of Traders report for last Tuesday, due to be posted after hours tonight, and doubtless it will confirm a strong technical bounce from is overdue.

There are therefore two forces driving prices down. There are the speculators taking out short positions based on price trends, and also the bullion banks are happy to give prices a push lower to trigger the remaining stops placed by a diminishing band of bulls.

The speculating hedge funds will have been informed by the next chart, of the gold price and its principal moving averages. 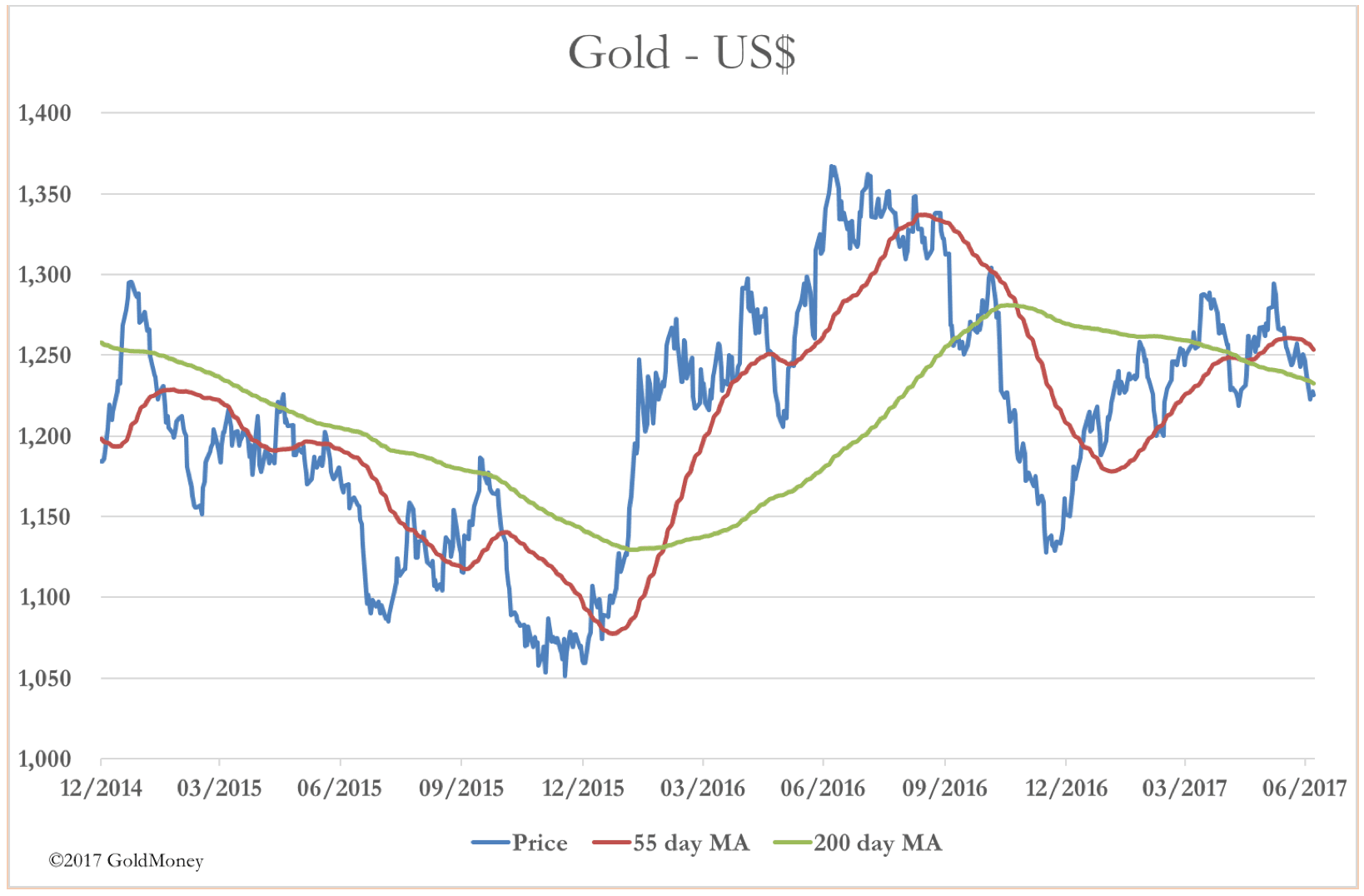 Chartists will tell you this is bearish, with the price below the 55 and 200 day moving averages, both of which are falling. The low of 10 May is being challenged, and after that support is indicted at $1200, which if broken could see prices fall to test last December’s lows.

Here, it is worth noting that so long as the too-big-to-fail banks can print short futures out of thin air, the speculators will always end up being crushed. They never seem to learn, because that’s what happens every time.

This weekend will see the first meeting between the co-conspirators Trump and Putin (according to the US’s deep state and the Democrats). Will they congratulate themselves on successfully rigging the polls to get Trump elected, or will agree the stories of their conspiracy are totally groundless? Take your pick, because we will never know for certain which is true.