Gold and silver declined over the week, though their paths differed. Gold peaked in the early hours of Monday, briefly spiking above $1260. 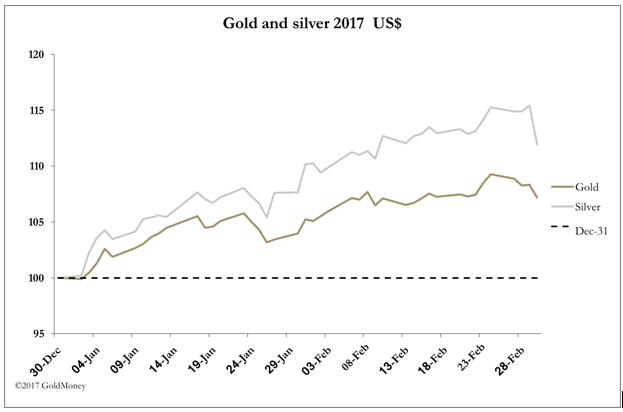 Silver peaked at the same time, but maintained the higher levels until the European close yesterday, when a seller of 20,000 Comex contracts drove the price sharply lower. It was an interesting development, which tells us much about the silver market.

On Comex, the large four traders category late in February was net short about 78,000 contracts, while the managed money category was net long 77,000 contracts. We won’t know for sure how this jumbo sale has effected this balance until the Commitment of Traders report for the current period is issued on 10th March. But it appears that one of the large four (it had to be one of them because of the size of the transaction) took the view that flaky hedge funds, in aggregate net long of what they were short, could be panicked out of their positions. Furthermore, the timing of the sale tells us that these flaky longs are in the US time zone, and that the seller didn’t want to see his shorts absorbed by more solid European buyers, who might take the opportunity to add to their positions.

It is possible that the seller was a large hedge fund, but we can rule that as unlikely for several reasons. Firstly, the level of open interest is only slightly above the long-term average, and the technical position of the market would not be propitious for a speculative sale of this nature. Secondly, hedge funds usually sell one thing to buy another, for example, shorting gold might be a trading bet on a stronger dollar. This condition does not exist with silver. And third, when a money manager takes a large speculative position in silver, it is invariably on the long side.

Annual silver supply from mines and recycling is about a billion ounces, and this sale represents ten per cent of it. It is quite remarkable that it only depressed the price by 3%. It was a desperate move, showing how worried the large shorts must be. The timing seems deliberate, ahead of what is increasingly seen as a rise in the Fed funds rate on May 15th. It also explains why US funds are more likely to be nervous than their European counterparts. European institutions are sensitive to systemic risk, and geared exposure to silver is seen as an insurance policy against upcoming French and Dutch elections electing Le Pen and Wilders respectively.

This should be noted by those who think a rise in US rates this month is a slam-dunk. Presumably, the Fed in its deliberations allows for dollar strength, particularly against the euro, and the strains widening interest rate differentials impose on a strained banking system. There is reason to think the Fed is concerned, because it is the logical explanation why US rates have not been normalised already.

Anyway, the preliminary open interest figures this morning indicate the raid was successful, and the large four category managed to close some of their short positions at the expense of flaky money managers. Not out of the woods, but sleeping slightly easier.