Before yesterday's (Thursday) rise in bullion prices, precious metals were in corrective mode this week after recent rises. There were two big stand-out sales of gold contracts on Monday, estimated to be about 5,000 contracts at the European opening, and 15,000 on the US opening. The combination of the two sales drove gold down over $30, and on Tuesday a further sale of 15,000 contracts drove the price down to a low of $1293 for a total fall of $45.

This negative action occurred at the same time as a new banking crisis was developing in Portugal, with Banco Espirito Santo getting into financial difficulties. For many gold traders, this suggested these large sales were price intervention to maintain confidence in the financial system. For this to be true, Open Interest would have expanded on Comex reflecting new opening bear positions. As the chart below clearly shows this cannot have been the case. 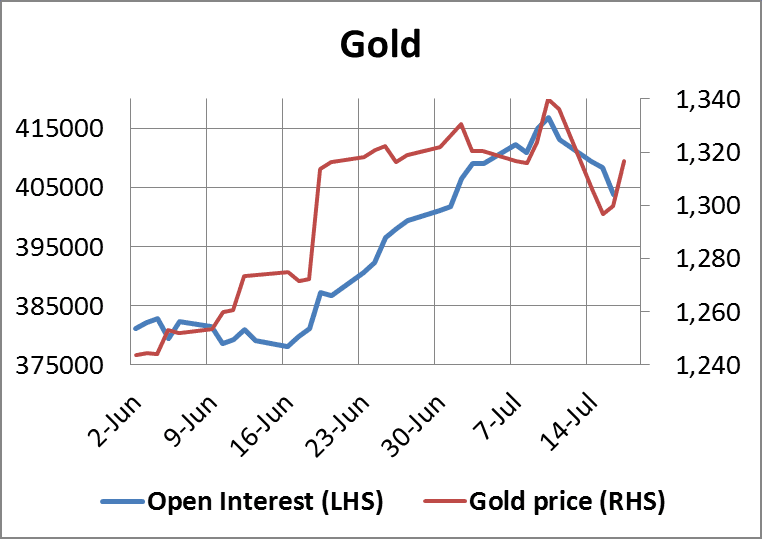 With Open Interest contracting, the only conclusion has to be these large sales were speculators taking profits. This is an extremely important signal, because the sales are evidence that big speculative money is now accumulating gold positions on price dips instead of shorting gold on price rises. While there can be little doubt that the sales were done in such a way that they drove the price lower, what we did not see was the gentle accumulation of long contracts that preceded them. And why would these speculators drive the price lower? To accumulate long positions again.

It does not appear to have been a bullion bank, because bullion banks have been going short in recent weeks: we know this from the Commitment of Traders reports. More likely it was a managed fund, which I expect will be confirmed on the Commitment of Traders numbers tonight in UK time. I shall tweet the evidence on @goldmoneynews when available. This being the case, we can expect growing numbers of speculators and hedge funds to accept that the trend has finally turned bullish, so we can climb the "wall of worry" that is the early stages of a decent bull market.

The developing bull-run looks like turning into a squeeze on the bullion banks themselves. The non-US banks, according to the last Bank Participation Report, were net short 62,099 contracts, which compares with a record of 78,564 in October 2012. They got away with their short exposure then, but conditions are very different today and they may be forced to cover.

This morning initial price movements for gold and silver are weaker at the European opening, while most other markets have steadied. If my analysis is right, then we can expect prices to steady during the day, with buyers looking to buy into the dip.

One key metric to watch will be the USD/JPY rate, with a dip below ¥101 putting adverse pressure on carry trades.