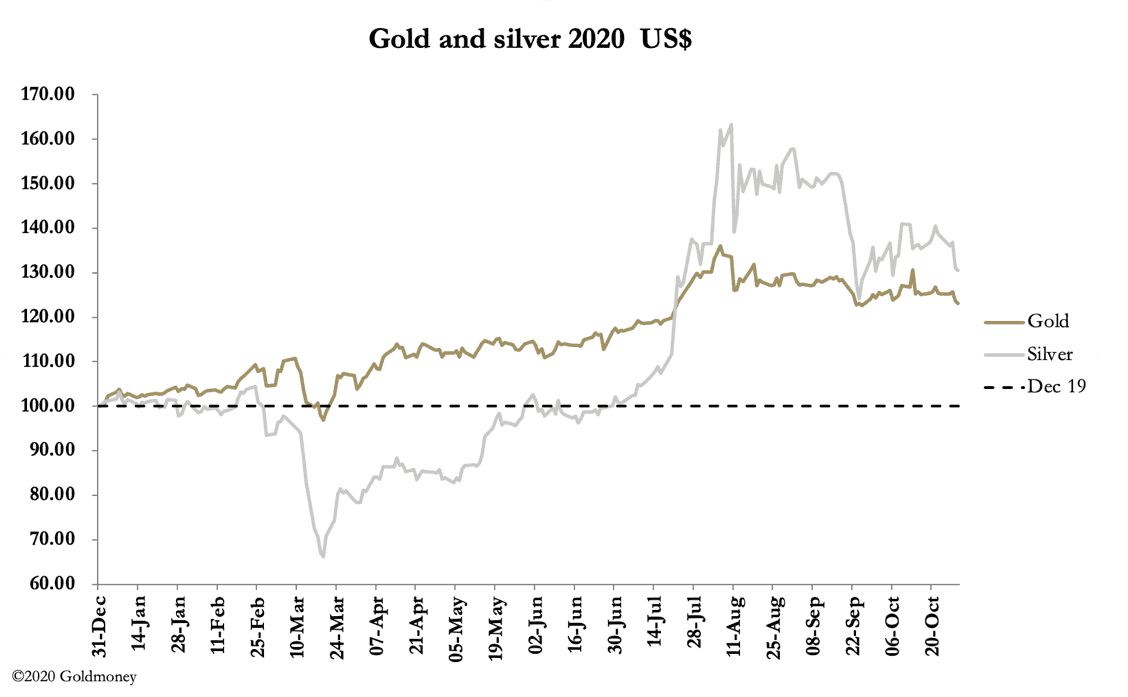 Gold and silver sold off this week, with gold falling $28 from last Friday’s close to trade at $1873 in European trade this morning. Silver lost $1.25 over the same period to trade at $23.34. Prices came under pressure from a flight from risk assets into the perceived safety of the dollar. And the euro fell after Ms Lagarde, head of the ECB, admitted yesterday that the Eurozone economy was likely to weaken further and that the ECB was planning further stimulus measures.

Meanwhile, the US stimulus, which we all know is coming, is delayed until after the US presidential election next Tuesday. Further dollar strength arose from reports that US GDP was up 33.1% in the third quarter. Our next chart shows the trade-weighted index, which is heavily biased towards a weak euro. 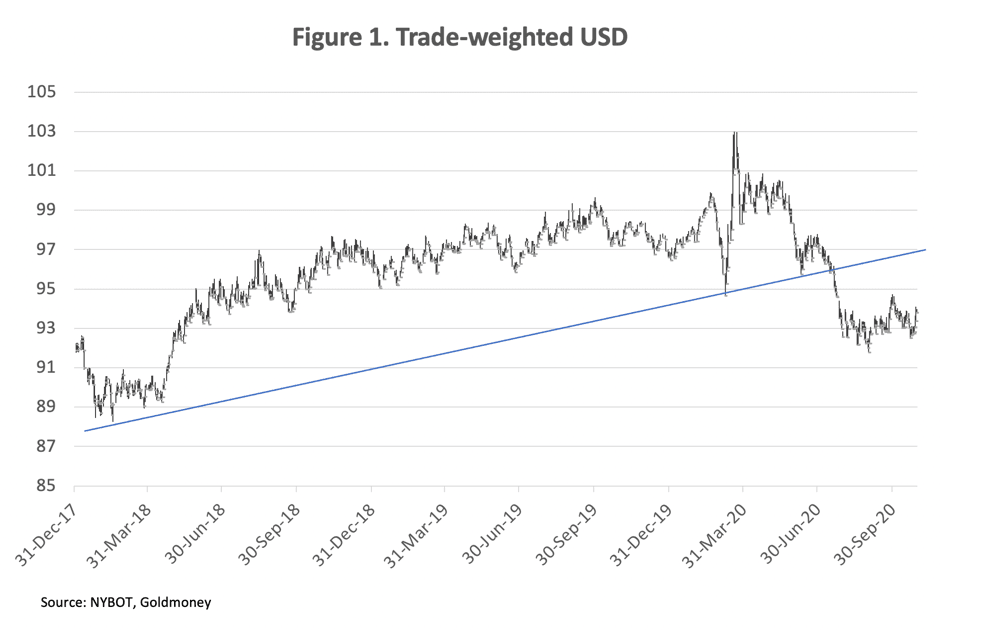 A technical analyst would suggest that a bear market rally could have further to go, perhaps to test the trend line, which was broken last July, and is currently at 97. The volatility of this index in these strange times was shown last March when the index rallied from 95 to 103 in the space of a few weeks, before collapsing to 92 on 31 August.

Hedge funds and algorithmic traders simply trade the dollar-gold cross, never standing for delivery but adding to volatility. Before the Fed intervened by cutting its funds rate to zero on 16 March, followed by an emergency statement the following Monday, the dollar’s TWI rallied, as stated above, from 95 to 103. At the same time gold fell from $1700 to $1450. Technical and momentum analysts are alive to a similar setup today, and could become the driving force if, in the case of a Biden win or a disputed outcome, American stimulus is further delayed.

The lesson from the March selloff is that those who trade gold are at a high risk of being crucified, while those who regard physical gold as money and ride out these speed bumps win out. The precondition, of course, being that the underlying trend is for fiat currencies to lose purchasing power relative to gold.

If, and it is an important condition, a second selloff materialises, inflation watchers will have a welcome opportunity to load up with more physical. And this is what happened in late March, as the following commitment of traders’ data showed.

The Other Reported category went record long at the bottom of the market and stood for delivery. Instead of this category being uncategorised misfits, it emerged as genuine demand, taking the opportunity to sell fiat money for physical gold. Premiums rocketed as the establishment was caught badly short.

The establishment is still badly short as the COT figures for 20 October shows.

The bullion banks were net short 192,516 contracts ($37bn), and the Other Reported category is net record long. Already, without a further selloff in gold, the similarities with 23 March when the gold price rose strongly from $1450 to over $2000 are striking. And a repeat performance could break the system.