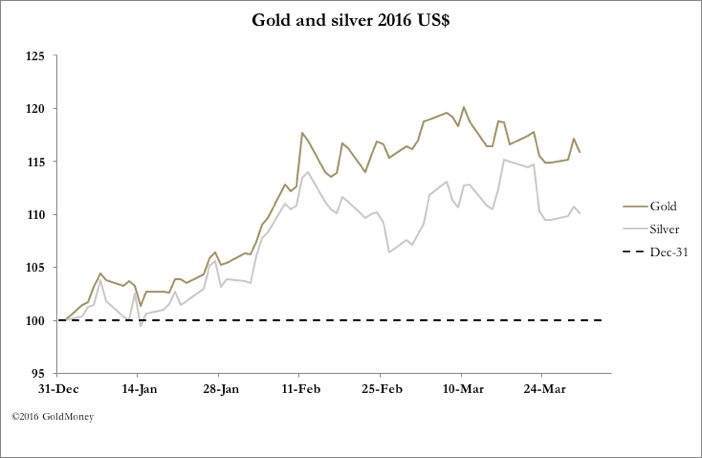 Gold and silver prices rose slightly over the course of this week, with the gold price up $15 to $1235, and silver up 20c to $15.38. London having been closed for Easter Monday, trading in the physical market was subdued. Futures' volumes were normal, with the exception of a spike on Tuesday when Janet Yellen delivered a widely anticipated speech to the Economic Club of New York, outlining the Fed's thinking about economic prospects.

Gold spiked over $20 on her speech's dovish tone, and silver rose by 30c. The underlying condition of the market remained firm, possibly underwritten by demand for physical bullion from Eurozone countries, such as Germany, where hard money traditions die hard and negative interest rates are widely regarded as both crazy and dangerous. While some commentators are pointing out that gold now gives a positive return compared with euros on deposit, it is probably the fear trade that has been driving demand, rather than interest arbitrage.

Yesterday was 2016's first quarter-end, and gold has had the best first quarter since 1974, according to ZeroHedge, rising 16.3% in dollars. For the record, in 1974 Q1 the gold price rose from $112.25 to $173, an increase of 54%. Gold has more or less been the best performing investment asset over the last three months, catching most macro-strategists unawares. The few that forecast higher prices did so mainly on technical grounds, and were unable to explain why the gold price should rise.

The next chart shows its performance against the other major currencies. 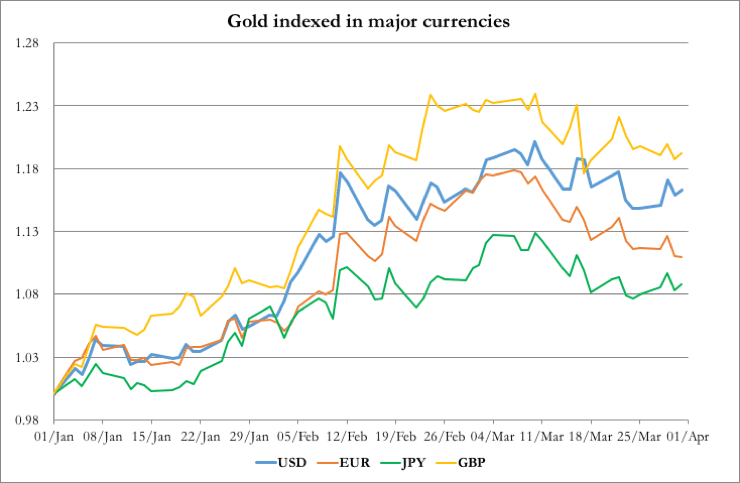 In euros, gold is up 11% on the quarter, and in yen up 9%. Plainly, negative interest rates are yet to have an impact on the gold price in these currencies. Gold in sterling closed up 19%.

On Comex, the bullion banks, who are generally on the short side of the trade, are finding it difficult to reduce their positions and had to work hard to manufacture opportunities. The message is clear: the market-makers and bullion banks are trying to recover their shorts, even as prices rise, instead of increasing them to smash prices, which is bear market behaviour. This change of priorities has bullish implications for the coming weeks. The in-phase relationship is clear in the following chart of open interest and the gold price.

Consolidation of the rise from the December price lows has occupied most of March, and obviously can continue for a while. How much longer will depend on factors influencing the outlook for the major currencies. The more there are signs of a failure of macroeconomic policies, the shorter will be the consolidation. Only this morning, Japan's Nikkei Index fell over 3% on an abysmal Tankan survey of large manufacturers, covering the period after the introduction of negative interest rates and an acceleration of the Bank of Japan's stimulus programme.

The abject failure of expansionary central bank monetary policies is becoming more obvious by the day, placing a floor under the gold price. There is bound to be a growing realisation that seeking refuge in fiat currencies is a false hope, and the timing of that realisation should lead to higher gold prices in due course.