Platinum is incredibly rare – in fact, it is estimated all the platinum ever mined would only fill a space of around 25 cubic feet. Global gold production is more than ten times that of its rarer cousin – so why is platinum currently cheaper to buy? Roland Khounlivong, Head of Dealing and Settlements, GoldMoney explains:

Platinum has become the metal of choice for many people when it comes to jewellery especially for wedding bands. It has an air of exclusivity, in part because of its rarity, and it is harder wearing with a naturally bright white colour that does not fade, like white gold. Ask anyone and they will tell you that platinum is a premium product and more expensive than gold – and it usually is – so what is happening at the moment?

If you look at this graph, you can see how gold was trading below the platinum price right up until the economic downturn when platinum plummeted and gold rocketed in price. These two very different reactions to a global recession are key to the metals' behaviour. 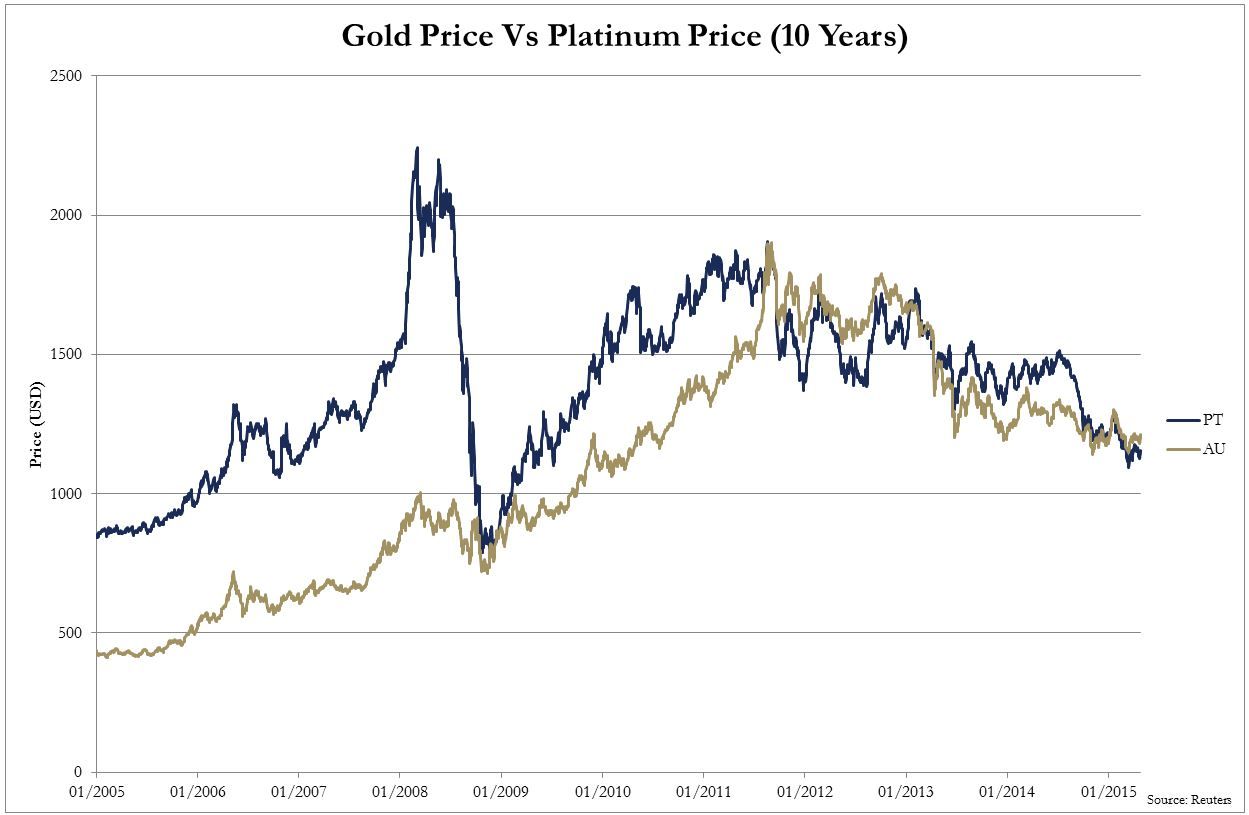 Platinum has been primarily an industrial metal. Over a third of production goes to the automobile industry. It is common sense therefore that a global recession, where demand for cars is hit, will push down the price of platinum.

Meanwhile, gold behaves completely differently. It is not an industrial metal, it is used as a store of wealth, a safe haven and a hedge against inflation and national currency fluctuations; it traditionally rises in times of economic uncertainty as it is an uncorrelated asset and can be stored outside of the banking system.

Traditionally, during periods of strong economic growth, platinum can be as much as twice the price of gold. Conversely, when things are not so rosy it falls, and we have the situation we are currently in, where platinum is now less than gold.

Another reason that has dented platinum's industrial demand is that it is used in catalytic converters for diesel engines. It had been thought that these engines were more environmentally friendly, but recent research is showing they are not so good for human health. It appears that they do emit less carbon, but studies show that they release higher levels of other pollutants such as nitrogen oxides, which may cause respiratory problems. These concerns appear to be impacting demand, with Paris having announced plans to ban diesel cars from the city within the next five years.

At the same time, car manufacturers have increased their own recycling and they are also reducing their reliance on mined platinum. Recycling is estimated to already be the second large source of the metal, representing more than a quarter of the global market.

So what does this mean for the long term prospects of platinum? The demand is changing with reducing industrial needs however, there has been a rising interest in platinum for jewellery.

The Chinese appetite for the metal has been increasing and currently accounts for around 20% of global demand with many commodities experts indicating it will increase further. This may start to change the way that the platinum market and prices react and the metal becoming less sensitive to industrial demand. However, at the moment, the Chinese market has stalled somewhat as its economy slows down, which is not helping current prices.

Indian demand is still increasing where, even in a country where the love affair with gold is still very strong, there is a rising trend for platinum wedding rings among the younger generation. The World Platinum Investment Council estimates that India accounted for 38% of global platinum jewellery demand last year and that this will rise during 2015.

Platinum is the underperforming precious metal so far this year. Supplies have recovered following the South African mine strikes in 2014 and, at the moment, the economic woes in Europe mean that the demand for auto catalysts is not as strong as it was. Short term, the prices do not look as though they are going to recover fast, but if we look further ahead the prospect is very positive. Some analysts believe that platinum is going to start behaving more like gold and less like an industrial metal. If it does then today's prices look very attractive and simple rules of supply and demand will mean investors will want to spread their portfolio risk with some of the white metal as well as the yellow.

Disclaimer: GoldMoney nor its representatives provide financial, legal, tax, investment, or other advice. Advice should be sought from an independent regulated person who is qualified to do so. Any information provided is solely as general market commentary and is not advice.