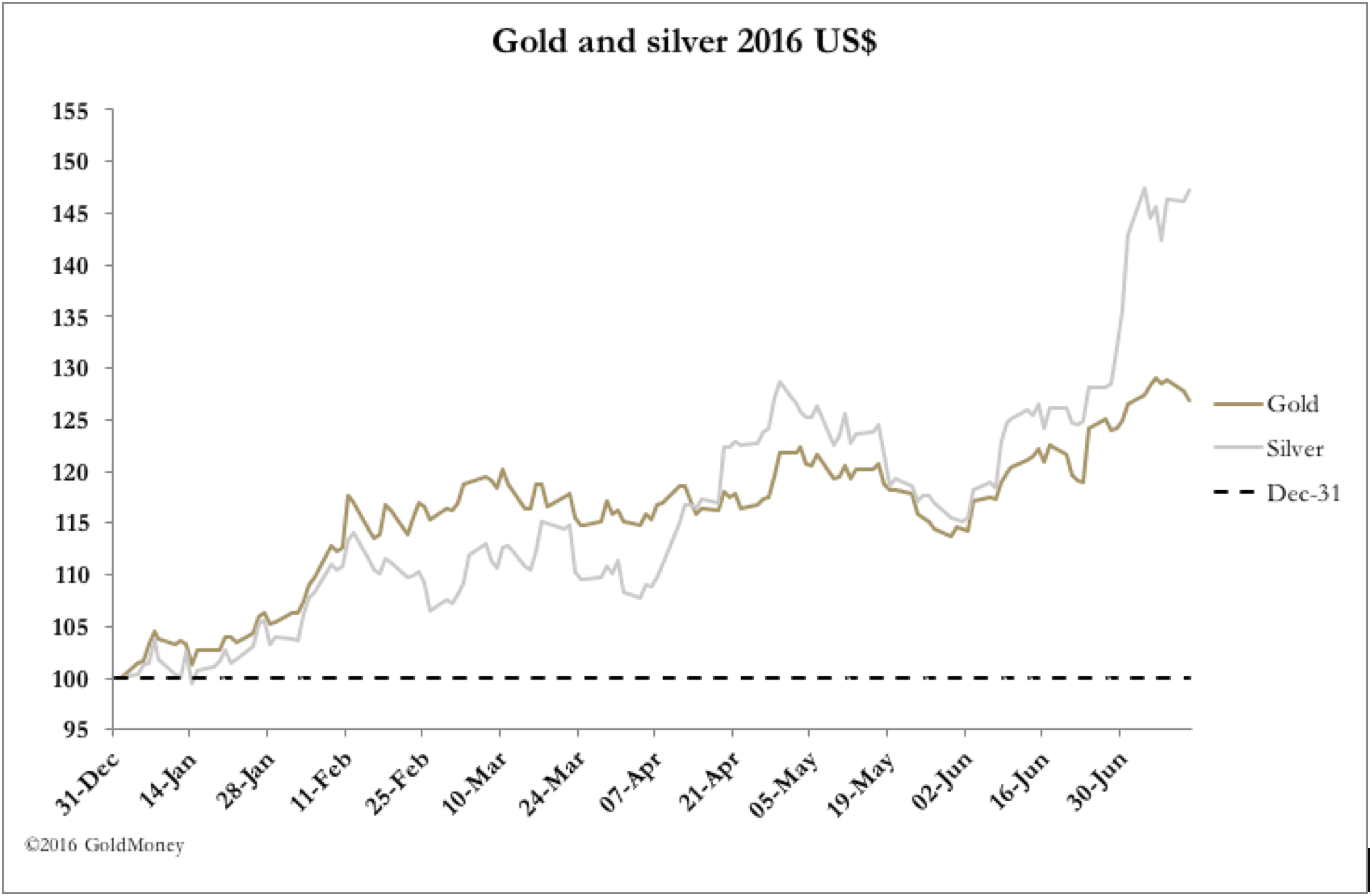 Following the Brexit shock, gold and silver have been consolidating the sharp rise that followed.

This consolidation, which started after America’s Independence Day, has been in the form of a relatively shallow correction, as our introductory chart shows. This leaves gold up 27% against the US dollar, and silver up 47%. Silver has caught up on all its earlier underperformance, driving the gold/silver relationship down from 83 in March to 66 this week.

While on the subject of performance, it is worth noting gold’s performance disparity between different currencies. Our second chart shows this in the major currencies. 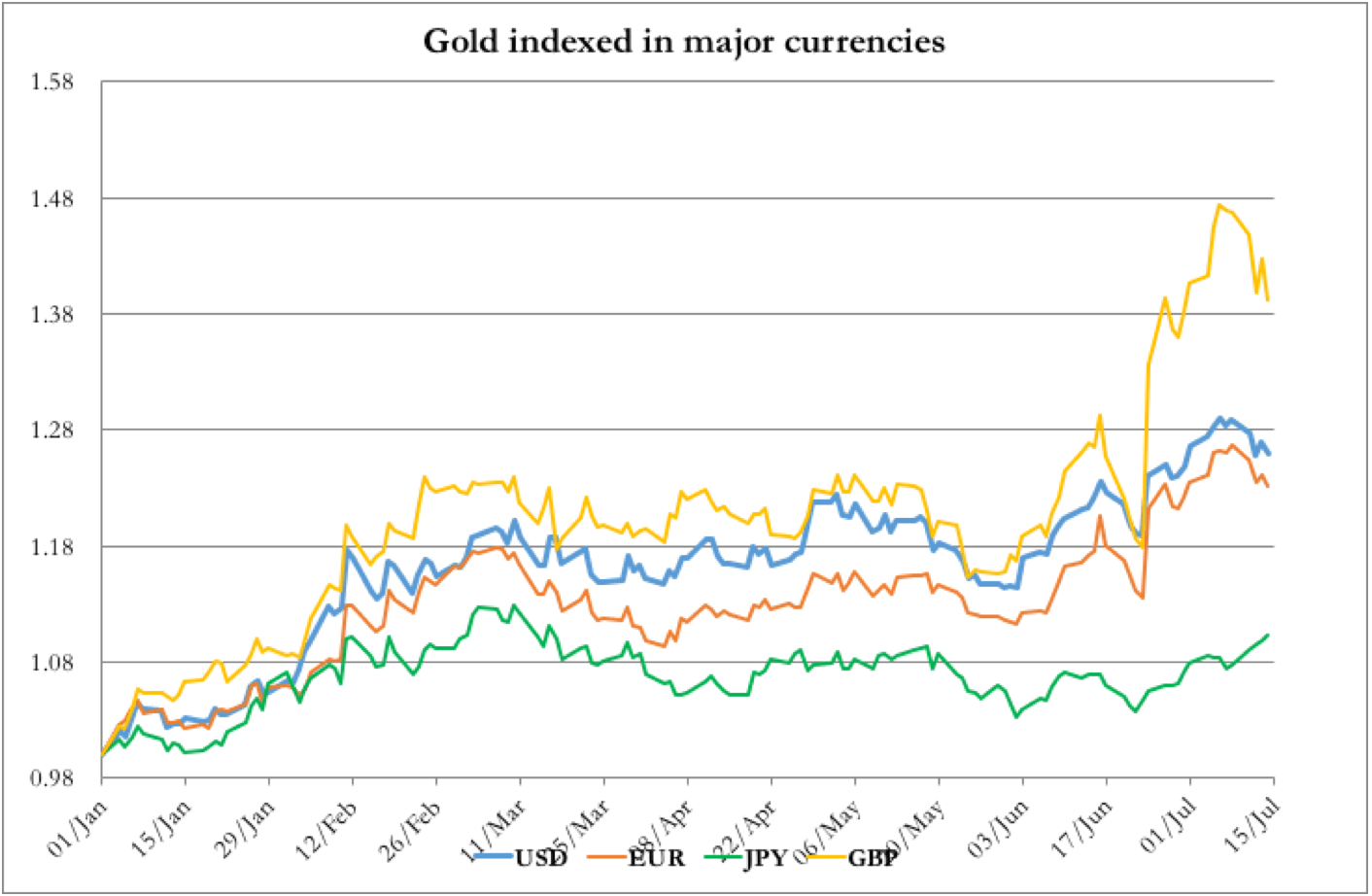 There is much to interest the observer in this chart, but even the more observant reader might miss the development of the gold price in yen. So far, it is up only 10% on the year, one quarter of the 40% shown in sterling. But bear in mind two things: a 10% rise is a very good return for yen investors, and with negative interest rates, the bullish drivers are significant. Furthermore, Tanaka, a major Japanese dealer in precious metals, is buying out Metalor, the well-known Swiss refiner. While deals are often opportunity-driven, in this case it is reasonable to assume that Tanaka sees exceptional demand developing for gold bars specifically for the Japanese market. In the normal course of business, Tanaka would be able to satisfy expected future demand by commissioning refiners to produce branded bars on a competitive basis. The fact that they have decided to acquire a major Swiss refiner sends a signal that they expect a significant expansion in retail demand for physical metal in Japan, necessitating security of supply.

In recent weeks, there has been increasing talk of yet more monetary stimulation around the world, but with zero and negative interest rates common to major currencies, attention is turning to variants of more directed stimulation through unfunded government spending. Japan, it turns out, has been consulting with Ben Bernanke, the previous governor of the Federal Reserve, famous for his long-standing recommendation of helicopter money. This popular description is a bit crude, but is the Keynesian end point for monetary inflation.

While currencies face new destructive tactics by their issuers, which is bullish for gold, one cannot ignore the technical position in the market. The bullion banks make money trading on the short tack, and have always managed to bring the price back under control when the speculators pause in their buying. If the market is to rise from here, physical buyers will have to overwhelm paper supply. 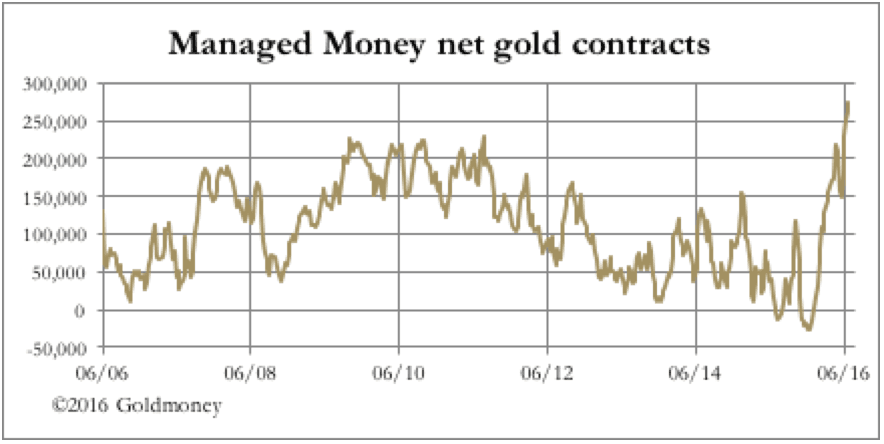 By any past measure, the futures market is wildly overbought. But will the speculating bulls win out this time?

There is a very good chance they will, but the danger of a market drifting lower while the bullion banks close their shorts is significant. It will depend on developments, such as European banking risks intensifying, and further developments in the course of monetary expansion.