The silver price is depressed compared with its historical relationship to gold, one ounce being worth about 55 of silver, against the historical rate of 15 or 16.

The reason, perhaps, has to do with silver’s demonetisation and its role as an industrial metal. However, with global supply from mines and recycling running at about one billion ounces and demand at only a hundred million less, it does not take much investment demand to create a severe shortage.

For now, pricing is managed for industrial use, and industry has a vested interest in keeping the price low. For clues of future prices, we need to look at market data, and the graph below shows the aggregate positions of two groups of users extracted from disaggregated futures’ data going back to September 2009. 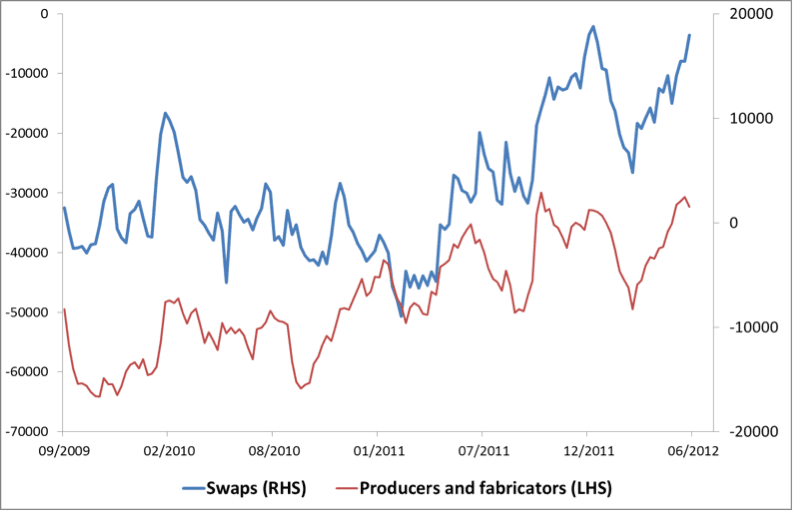 The two categories shown are swaps and producers and fabricators. Swaps are hedging positions on other markets, mostly physical or physical for forward delivery. Swaps amount to a net long position of 17,952 contracts, representing just less than 90m ounces, indicating there are short positions on other markets amounting to nearly the whole of that 100m ounce gap between industrial demand and annual silver supply. This suggests that the market for physical silver is very tight.

I have called the second category “producers and fabricators” for simplicity, though the reporting form actually categorises them as producers, manufacturers and dealer/merchants. Essentially shorts hedge price risk for miners and refiners, and longs are taken out by manufacturers and other users as protection from price rises. The position shown is a net position, and as the chart shows, this has reduced by approximately half to 32,286 contracts (161,430,000oz) over the last three years.

Within this figure shorts total 254,000,000oz, and this is the bigger variable. Many mines have to sell silver in the form of concentrate or doré to cover cash flow. The mines sell through specialist commodity traders such as Glencore and Trafigura, who then get it processed by the cheapest refiners, who are mostly in China, which also happens to be the largest industrial user of the metal. This is why it has been in China’s interest to control the price for industrial purposes. In the past China has simply increased her forward sales to compensate for increased investment demand.

The flaw in this approach is there are no significant reserves of physical silver available, and price suppression depends on countering physical demand with derivative paper. This strategy is more vulnerable to the shortage of physical, which drives swap positions, rather than the forward sales of mined and processed silver, which only delays the delivery needed by the physical markets.

Coming events, such as the impending bankruptcy of a number of European nations and the progression of the Arab spring, together with the unattractiveness of alternative investments at a time of growing systemic risks, should accelerate physical demand. At some point China will become more interested in retaining her valuable silver than controlling the price for the benefit of industrial users everywhere.