Gold and silver continued their rally this week, with Tuesday an especially strong day. Initially, gold was marked down to $1228 before buyers stepped in, and on heavy futures volume the price rose to $1247. Comex open interest that day rose by 16,494 contracts. 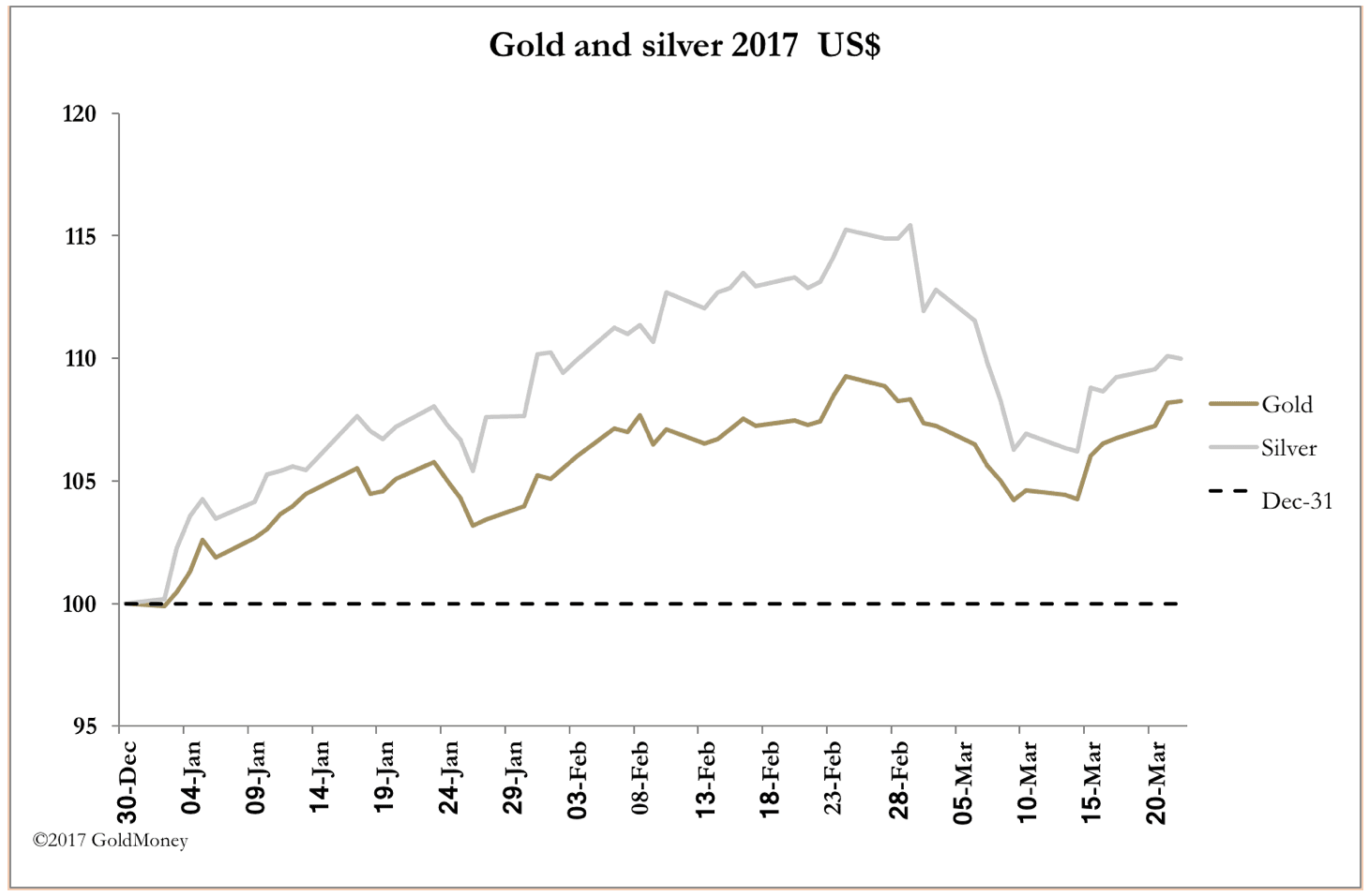 On the week, gold is up $14 from last Friday’s close by early European trade this morning, at $1243. Silver rose from $17.40 to $17.59 over the same timescale. Silver’s underlying strength relative to gold has picked up again, with the price tending to rise slightly relative to gold in consolidation periods.

Next week sees options expiry for gold, and a large position in the April futures contract must be liquidated, or rolled over into June. In the absence of good physical demand, one would expect the bullion banks, who are almost always net short, to mark prices down to encourage selling by the hedge funds. So far, this is not happening.

The likely reason is good underlying demand for physical gold. Indian demand is picking up again, following the banning of cash notes, with Switzerland exporting 37 tonnes in February. Chinese demand in February was also good, with Swiss exports at 21.5 tonnes last month. European interest appears to be strengthening as well, and the physical market is reasonably tight. Furthermore, the Russian central bank acquired a further 9.33 tonnes. ETF inflows picked up this week, rising by 9 tonnes in two days, according to Commerzbank.

Central bank demand can be expected to continue. Their tactics are to buy bullion quietly when it’s offered, which could be a good reason why the market appears so firm underneath. So, for the futures market, the physical background suggests that the market is underwritten, and any attempt to mark it down risks backfiring. The hedge funds are generally unconcerned over the physical position, because for them buying gold contracts is the other side of shorting the dollar. And there are signs the dollar rally is over.

Having been gung-ho over interest rate rises, a note of caution has crept into markets, with various indicators suggesting the US economy is slowing. At the same time as the Fed increased in interest rates last Wednesday, the Atlanta Fed downgraded its Q1 growth estimate from 1.2% to 0.8%. Consequently, with growth in the Eurozone showing some signs of life, the dollar’s trade weighted index looks set to ease further, and a lower dollar equates with a higher gold price. Furthermore, US Treasury bond yields have eased, with the 30-year bond falling from 3.2% to 3.0%, a significant correction.

The dollar’s weakness this year is reflected in our last chart, which is of the daily closing gold price in the four major currencies. Prices expressed in euros, sterling and yen have all risen less than in the dollar. 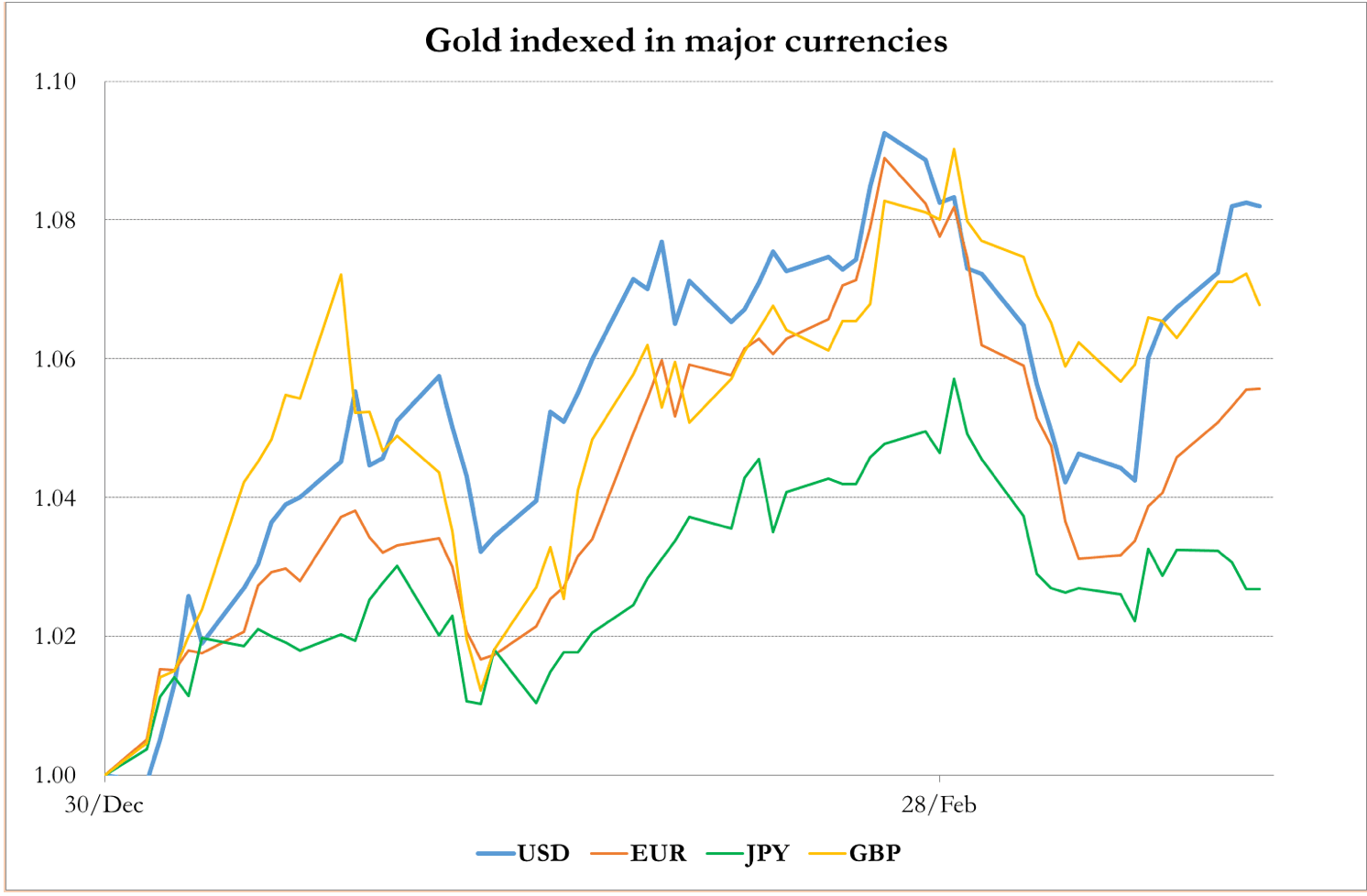 While the outlook for gold seems set fair, there is still the hurdle of next week’s option expiration, and the rolling over of futures contracts. The slightest justification, such as news seen as supportive for the dollar, will encourage the option takers to mark prices down.