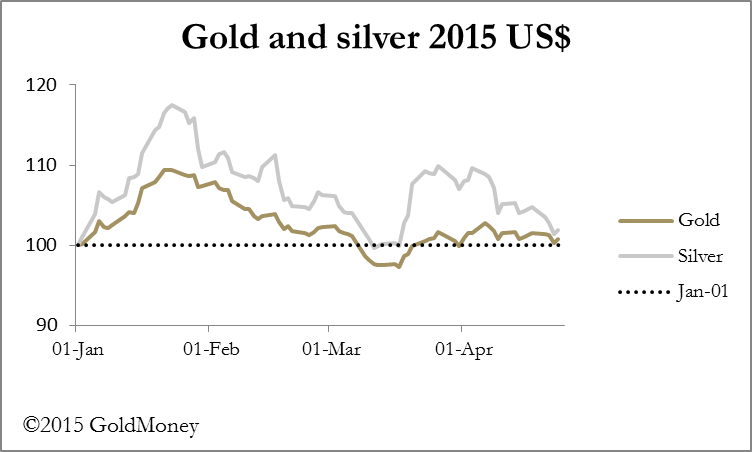 Precious metals continued their consolidation this week, with gold drifting off $10 to $1195 as of last night, and silver by $0.42 to $15.85. Intra-day trading ranges are relatively tight with buyers of physical metal on the dips and sellers of paper contracts capping rises.

There is little doubt that the global economic outlook, with China's economy slowing and earlier expectations for US growth trimmed back, is affecting sentiment. An analyst's note from Morgan Stanley forecast lower gold prices for the next two years, on the basis that negative bond rates elsewhere will continue to drive flows into US credit, continuing dollar strength.

There is an underlying argument that quantitative easing is not working, and zero interest rates are not preventing deflation. That being the case, there are many fund managers who are not only bullish on the US dollar in currency markets, but they believe its purchasing power in terms of goods and services is likely to increase. If this analysis is correct, then, it follows that gold priced in dollars will continue to fall.

Whether or not this undermines the gold price in the short-term remains to be seen, but empirical evidence tells a very different story. The situation in Germany and Austria in 1919 was similar, in that massive monetary stimulation failed to improve the economic outlook, and the overwhelming public opinion was that prices would fall. In other words, the purchasing power of the mark and crown respectively was expected to rise. As we know, the reverse was true with both currencies collapsing entirely a few years later.

The fact that Germany and Austria were dealing with a post-war slump and the conditions today are inherently financial does not invalidate the comparison. When inflating the money supply fails to stimulate an economy, people will logically believe deflationary forces are greater than inflationary forces, when the likelihood of a currency collapse has actually increased. We appear to be at this point in time.

The result is that on Comex the hedge funds have maintained above-average short positions in gold, allowing the bullion banks to reduce theirs. In silver Open Interest has rocketed up to all-time highs as shown in the chart below. 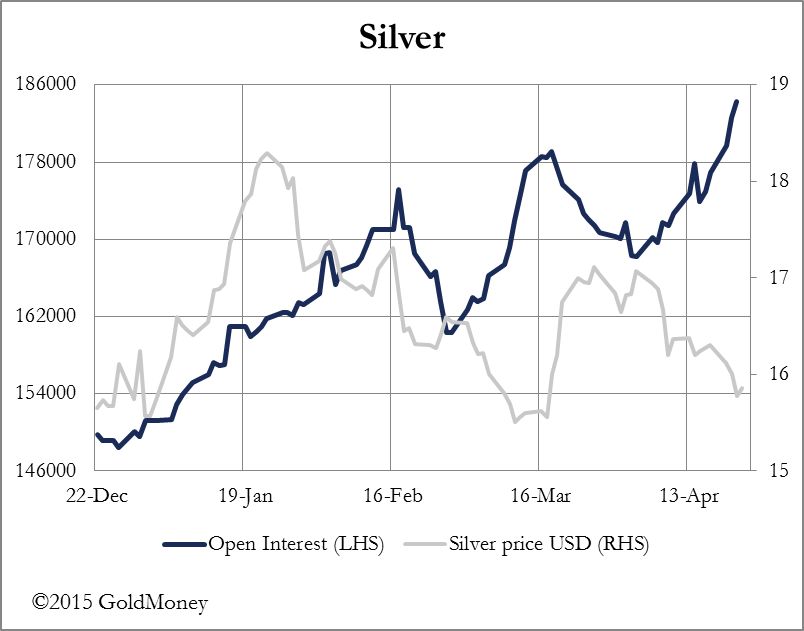 It appears from Commitment of Traders* data that most of the increase in Open Interest this year has been in spread positions by both swaps and managed money categories. This indicates that poor underlying liquidity is contributing to price differentials across different contract maturities.

Last week, the Shanghai Gold Exchange delivered 49.95 tonnes of gold into public hands, an increase of 44.7% on the previous week.

*The Commitments of Traders (COT) reports provide a breakdown of each Tuesday's open interest for markets in which 20 or more traders hold positions equal to or above the reporting levels established by the Commodity Futures Trading Commission.