Market Report: Waiting on the Fed

Gold and silver continued to decline over the week, along with base metals and oil. Gold fell $40 from last Friday’s close to $1195, and silver by 112 cents to $16.85 in early European trade this morning (Friday). 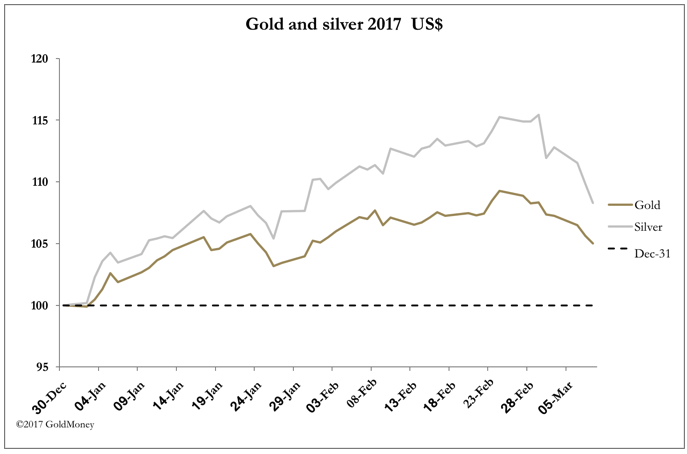 The bears are quick to point out that $1200 and $17 levels respectively are being breached, and the downtrends are being resumed. This view suits the large bullion banks, which have been running short positions, because it has panicked the managed money crowd into closing their longs on Comex.

All this has nothing to do with physical demand, and it is likely that Asians, who are value buyers, are adding to their holdings. Furthermore, the central banks, which tend to buy when physical is offered, are also buyers. So, what this is about is about the dollar, Comex, and nothing more.

Everyone is long of the dollar. Next week the US Fed is almost certain to raise the Fed funds rate by ¼%, an event that has, according to market surveys, a 90%+ probability. The performance of the dollar, and therefore everything priced in it, is repeating what happened ahead of the previous two interest rate rises, in December 2015, and December 2016. In both cases the dollar was strong and gold and silver weak before the event.

Both those hikes were followed by gold and silver rising strongly, by 29% and 47% in mid-2016, and 9% and 15% this year. The fact that precious metal prices have held up as well as they have this time is indicative of greater underlying strength in the market, which is in line with growing demand for physical bullion.

On the same day as the FOMC decision next week, 15th March, the suspension of the US Federal debt ceiling ends. When that was first agreed in July 2011, the gold price rose over $200 in the fortnight following. It will be interesting to see what happens this time.

In other dollar-related news, the US bond market continued to fall. According to one report, it has been the longest losing streak for 43 years. The long bond yield rose to 3.183%, the highest since mid-December, when the Fed pushed up the Fed funds rate. Yesterday’s auction of 30-year Treasuries was cleared at 3.17%, the highest yield since September 2014.

So, it is not just gold and the dollar that turns on these rate changes, but it appears dollar bond markets should be included. The weakness in the bond markets is stretching equity valuations as well, which is causing a high level of nervousness in some quarters. Every bear market starts from a bull phase that ignores rising bond yields only for so long, before suddenly, the illusion snaps and equities collapse.

However, when we look at weakness of gold and bonds ahead of an interest rate rise, coupled with dollar strength, there’s a fair chance normal service will be resumed after the event.

Commodity prices have also weakened substantially, reflecting that dollar strength. However, China’s post-lunar holiday stocking has not been resumed as originally expected. This is leading some analysts to think the Chinese economy is not following through with its growth. We understand the reason is somewhat different, and has more to do with the government rooting out kickbacks on industrial ordering, after which industrial demand will resume.

All dollar-denominated markets are waiting on the Fed. The Fed is badly behind on its interest rate rises, with the Taylor rule suggesting the Fed funds rate should be considerably higher. But everyone is long of the dollar, which means it should be heading for a dramatic fall, unless the Fed raises rates by more than ¼%, which seems most unlikely.