Market Report: Waiting for the Fed 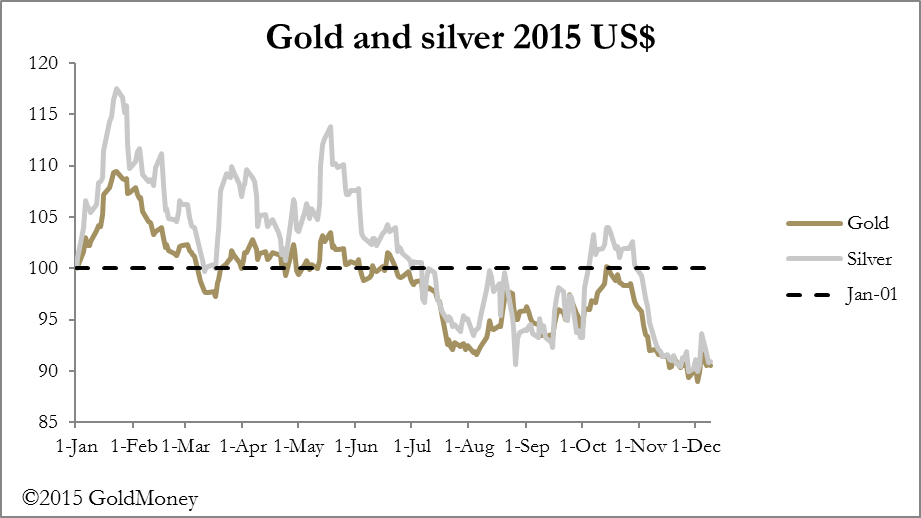 Change the title of Samuel Beckett's play to substitute the Fed for Godot, and you have a fair description of the tedious market for precious metals this week.

After spiking up last Friday under the influence of bear-closing, gold and silver prices have done nothing but drift lower-to-sideways all week. That said, the market imparts a feeling of a firm undertone, with backwardations in physical markets, and an absence of selling in the futures, rather than any serious demand chasing prices.

The Fed will pronounce on Wednesday. The FOMC has all but said they will raise the Fed Funds Rate target by 0.25%, and that this increase will be the first of a gradual rising trend. The futures market has discounted this announcement, with the Managed Money category (i.e. hedge funds) net short for only the second time. Meanwhile, swap dealers (mainly bullion banks) are actually long. Unless this extreme position normalises, which would probably see the gold price recover to over $1100, it leaves open the opportunity for an obvious trade on the bull tack.

Given this prospect is so obvious, it is reasonable to expect the gold price to rally modestly ahead of the FOMC announcement. Furthermore, there is another factor in favour of precious metals not yet on traders' radar, and which could help explain the current scramble for dollars. This is big trouble brewing in the wider commodities world, threatening to trigger bad debt liquidation not only from producers which are now cash-flow negative, but also whole countries are now facing severe financial difficulties. The stand-out hit has been from the oil price, which this week fell by a further7½% to multi-year lows on news that OPEC members are still accelerating output.

All producers at both the state and corporate levels are responding to lower oil prices by trying to secure the same gross sales by accelerating output. The over-supply problem afflicts other commodity markets as well. Miners are in trouble, with Anglo-American cutting 85,000 jobs as part of a financial restructuring and Glencore facing yet more debt reduction plans. When the big beasts in the commodity world are in trouble, you know that the bad debts across the sector are widespread, both for producers and also for whole countries.

Brazil's debt is now facing a downgrade to junk status and Canada is contemplating negative interest rates. Even Finland, which exports forest products, and whose principal export market is Russia, is in difficulties. Yesterday, the South African finance minister was fired, a presidential reaction to a deteriorating economy. It is not just oil, and it is not just emerging markets.

According to a ZeroHedge report shipping rates out of China are collapsing, evidence that behind it all the wider global economy is in serious and deepening difficulties. The bad debts faced by the global banking system are spreading from commodities into a wider meltdown, the size of which threatens to exceed the sum total of the banking system's core capital.

Against this background Planet America expects a rise in interest rates, because everything there is hunky-dory.