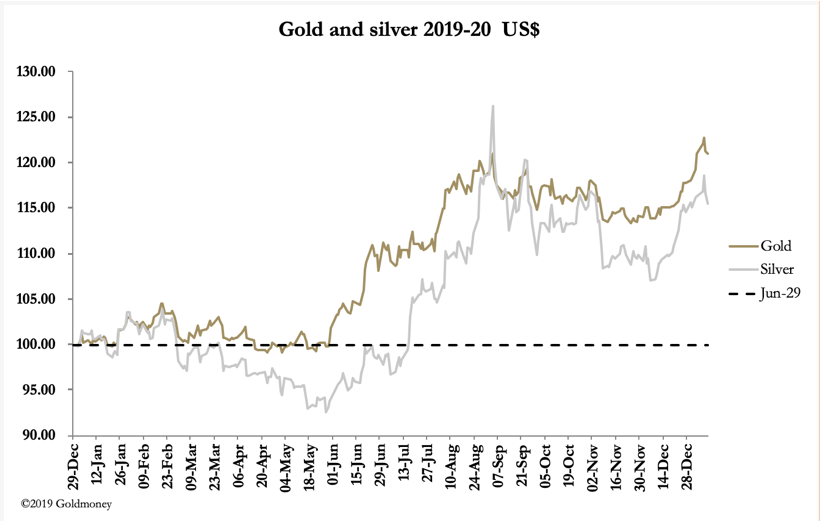 Our headline chart does not capture the volatility this week that was sparked by the assassination of the Iranian Major-General Qasem Soleimani, and the subsequent reprisal. While gold was down $4 from last Friday’s close in European trade this morning at $1548, on Wednesday it spiked to $1610. Silver was also volatile, losing 22 cents to $17.90 on the week.

These conditions must have been testing for the bullion banks, who are record short, illustrated by our next chart of the net swap position. 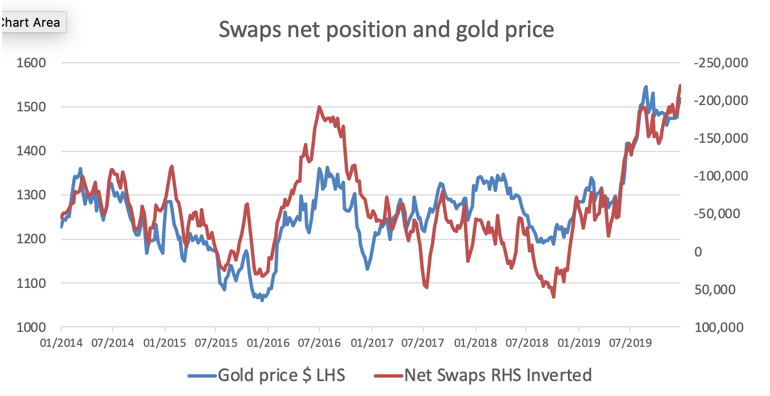 As the gold price has risen, so have their shorts, and at 34,487,000 ounces equivalent (1,073 tonnes) the threat of a new Middle East war will have given them sleepless nights.

But as several experienced gold watchers have pointed out, the safe haven aspect of gold is overblown. It is one thing if you are a merchant in Iraq protecting your wealth, but that does not drive gold prices globally. What matters is the evolving relationship between sound and unsound money, and more specifically unsound money represented by the US dollar.

It should be noted that the dramatic breakout into new high ground for open interest occurred before the assassination, indicating systemic and economic considerations are already driving the gold prices. The pressure has come from growing demand for paper gold, demand that is classified as speculator to distinguish it from the commercial.

Speculator is merely a handle, which can conceal demand which is less ephemeral than it suggests. It is challenging the workings of Comex, which together with the London forward market works to absorb demand by expanding supply. Could this be the time when the system finally breaks? For the fact is if you continually suppress growing demand by this mechanism, it will not work for ever.

Certainly, there are reasons prima facie to be bullish for gold and bearish for the dollar and other fiat currencies. Liquidity problems in the US banking system persist, with repos still required to inject liquidity into the system. Not QE has become QE, and one of the benefits so far as the Federal government is concerned is demand for US Treasuries is assured as the counterpart of liquidity creation.

Long gone are the days when governments did not require inflationary funding at the mature end of the credit cycle. And now that the global economy is showing increasing signs of slowing, central banks are accelerating the pace of monetary inflation in an attempt to head off a recession.

Amongst the speculators there appears to be a growing realisation that gold is an appropriate hedge against these escalating risks. But it is still a small minority that realises it. And if you are a bullion bank, perhaps with inside knowledge of the extent of the systemic problems, you will want to back out of a large short position.

The battle between bullion banks acting as market-makers and hedge funds hedging risks is set to intensify as both sides try to contain different risks. Comex sided with the bullion banks yesterday by raising contract margins by 11%.