Market Report: Up, up and away! 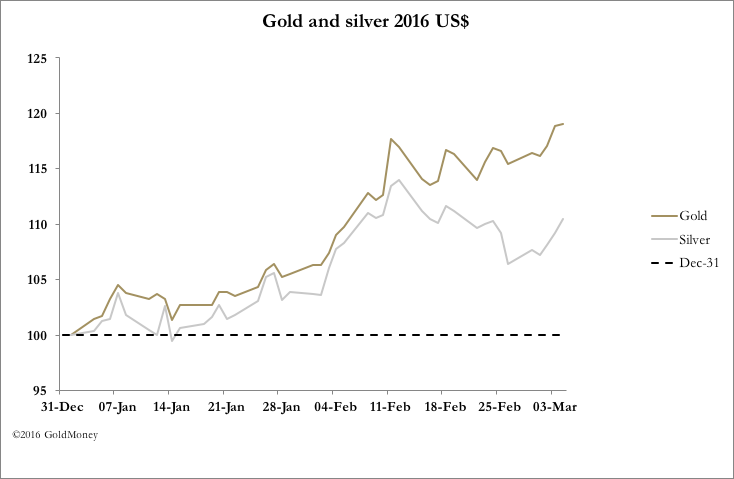 Gold has had a good week, breaking out from a consolidation pattern, and heading into new high ground for this year.

Silver, which has been left behind, appears to be merely pulled along in gold's wake. As of early this morning UK time, the gold price is at $1,261, up 19% on the year, while silver is a little better this morning relative to its recent underperformance at $15.30, so is up only 10.5% on the year. Silver's underperformance is a mystery to many, probably explained by the big money shifting into gold having been dangerously underweight, while the silver price is still reflecting moderating industrial demand. The result is the gold/silver ratio is now over 82 times.

Whoever is buying gold is probably less of an important issue than the simple fact that prices rise when there are more buyers and sellers. We started from a base of maximum bearishness, with traders and investors in western financial markets owning almost no gold. On Comex, traders were actually net short last December, a hitherto unprecedented situation. It is from these extremes that gold and gold-related investments, such as the mining companies, have soared. Gold is the best performing asset measured over the first nine weeks of 2016, and portfolio exposure is close to zero.

So the strength of gold is taking everyone by surprise. The common view of analysts in the investment houses appears to be there is no need yet to review their price targets, which are variously between $950 and $1300 for the year end. From being outright deniers of the investment merits of gold, many of them have moved to defend their position by saying it is based on their economist's economic forecasts. Read this as code for "it's not my fault I'm getting it wrong, I'm just reflecting the house view".

The financial establishment has missed the boat, and is probably only a marginally reluctant buyer on balance. But what trader can look at gold's performance, shown in the next chart, and keep short positions running? 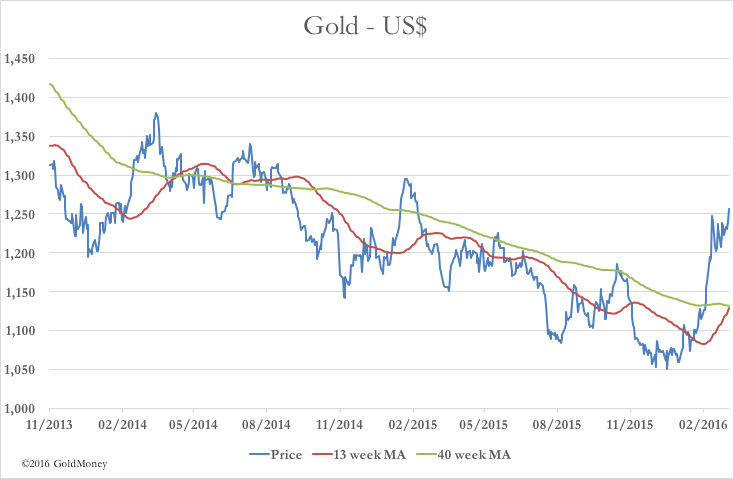 From every technical standpoint, this chart is so bullish as to be very frightening for the bears. A classic golden cross of the moving averages is in place, and the price has completed a text-book pennant consolidation, which should mark the half way point in the up-trend, giving a price objective of $1400+. Of course, technical analysis doesn't always work, but the point is that bears should not be just hibernating on their positions.

Technicals aside, fundamentalists have the task of casting around for reasons behind the move. Could it be that the central bankers, returning from the G20 meeting in Shanghai, are either demanding their leased gold is returned, or alternatively wading into the market to secure some physical bullion?

A fanciful thought perhaps, but there is no doubt that the tone of that G20 meeting was downbeat. This is hardly surprising, given the increasingly obvious failures of monetary policy. Importantly, the Brexit referendum is not going to plan, and if the opinion polls begin to show a majority in favour of leaving the EU, the break-up of its political model may follow. Concerns will then mount about the future for the highly-leveraged Eurozone banking system, and even for the euro itself.

Equity markets have enjoyed a relief rally, while there has been a pause in the negative news flow. No doubt bullion traders would have expected the gold price to fall, reflecting profit-taking. As noted above, this has been limited to a relatively small consolidation in the form of a technical pennant.