The long-awaited event of the week was the Fed raising the Fed funds rate by ¼%. Everyone knew it was coming, and what it would be. 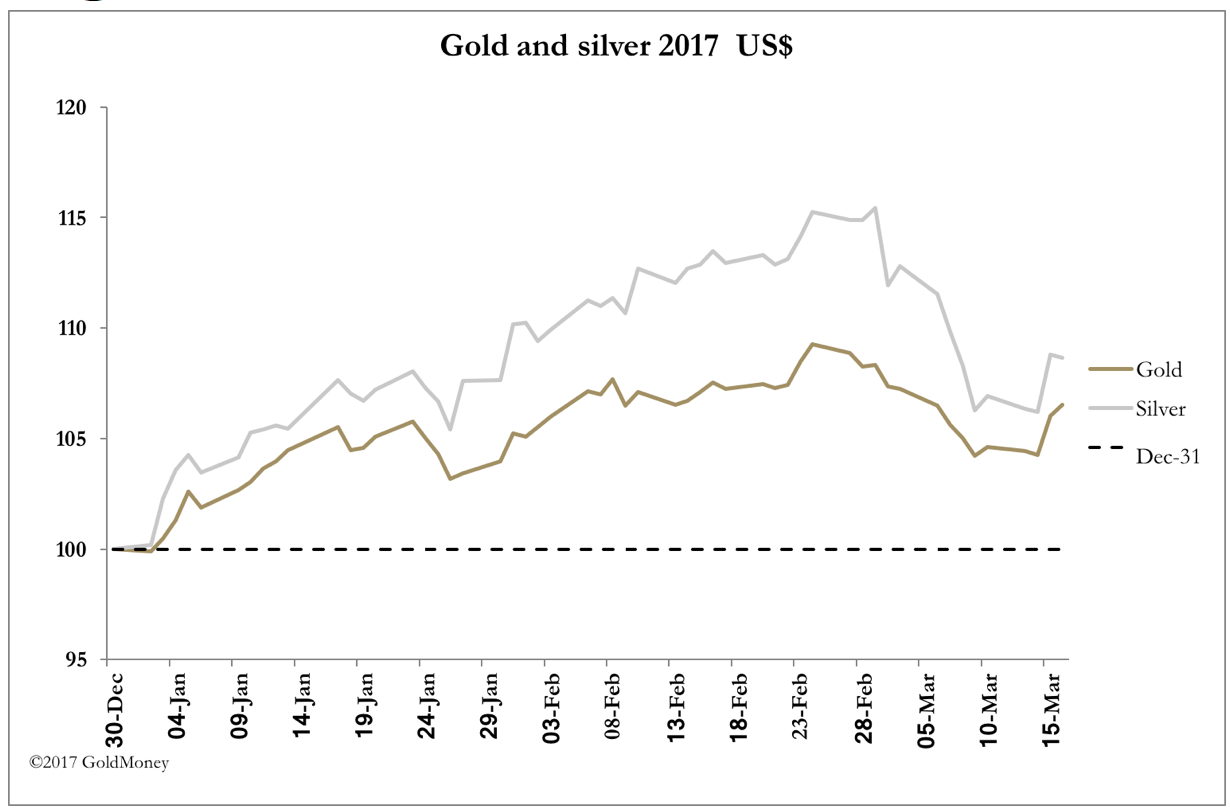 The market effect was a strong dollar ahead of the event, and weak precious metals. There was profit-taking in the dollar afterwards, so precious metals bounced. Entirely predictable.

Gold rose $23 on the week to $1227 by early European trade this morning (Friday), and silver by 27 cents to $17.30. Silver was relatively weak yesterday in US trade, compared with gold, tracking the profit-taking in copper, while gold continued to firm up against a weakening dollar.

Silver is getting left behind as our introductory chart shows, with it up only 8.7% this year so far, while gold is up 6.5%. Normally, silver moves on average slightly less than twice that of gold, suggesting the right price for silver should be about $17.80. Silver’s slight loss in performance is shown in the gold/silver ratio, which is our next chart. 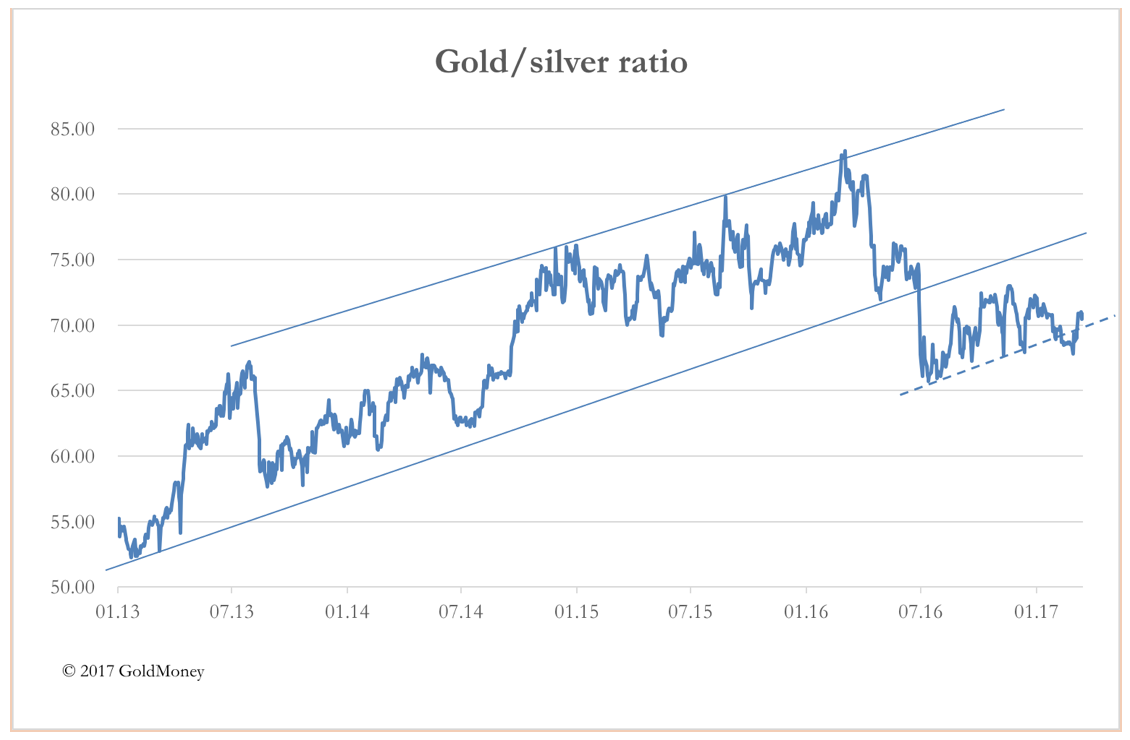 Recent weakness is reflected in the uptick above the dotted trend line. If the gold/silver ratio falls below 70, ratio traders will look for it to fall further, towards 55.

The FOMC statement on Wednesday was interpreted as dovish compared with expectations. Economic growth has disappointed in the last three months, with the Atlanta Fed revising down its estimates to 0.9%. Furthermore, there is considerable uncertainty over the budget process, and officially, the debt ceiling is no longer suspended. When the suspension ended on Wednesday, the US Government’s cash balance was only $23.4bn, and the debt subject to limit stood at $19,809bn, according to the daily Treasury statement. There’s going to be some creative accounting on its way, or government will begin to shut down.

Doubtless, the Fed would rather not have been committed to raising the Fed funds rate, but having all but said it would, there was little alternative. The Fed’s priority must be price inflation, which is breeching the Fed’s 2% target, and threatening to go higher. If the dollar weakens, which seems likely, given a disappointing economy and debt limit uncertainties, price inflation pressures will increase even more. Therefore, the Fed has a problem either way: raise the FFR, threaten economic growth and raise the cost of government borrowing at a bad time; or go soft on interest rates and see the dollar weaken. You could detect the lack of enthusiasm in Janet Yellen at her press conference.

As this percolates into investors’ thinking, the outlook for precious metals, priced in dollars, is likely to improve. The gold bears on Comex are dollar bulls, so we know the source of futures buying. How long it will take for financial markets to reassess the prospects for the dollar is the unknown factor, but there are signs that China intends to tighten monetary policy, and there’s some early speculation the EU will as well. For the moment the latter is only speculation, which doesn’t address the problem of how the EU increases the taper rate without triggering banking difficulties.

Technical analysts, because of the bounce from $1200, are beginning to think gold has found its support, with that level roughly coinciding with the 200-day moving average at $1210, illustrated in the last chart. This should support a rally in the gold price to test the 55-day MA, currently at $1261. 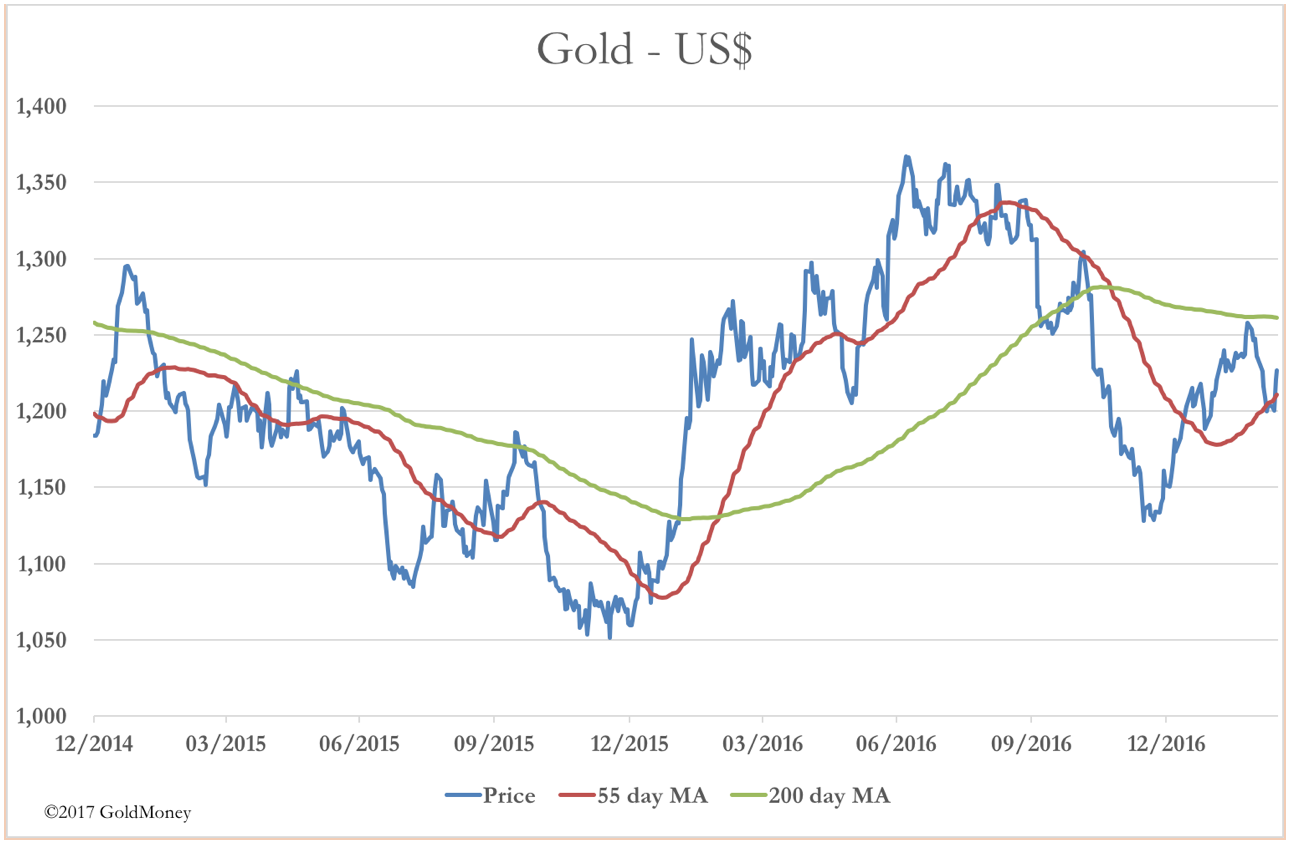