By Alasdair Macleod
Market Updates May 01, 2020 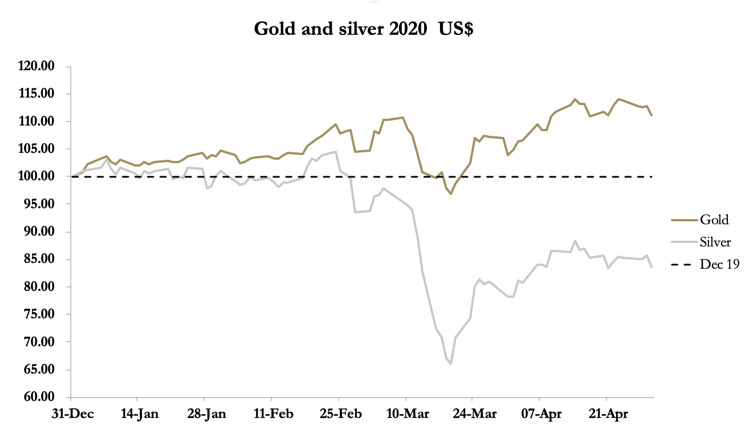 Despite persistent premiums on Comex over London’s spot gold and silver, both metal contracts were marked down this week, with gold down $54 from last Friday to trade at $1673 in Europe this morning, and silver lost $0.34, trading at $14.86 on the same timescale.

Recent weeks have seen Comex swaps (bullion bank trading desks) struggle to close their short positions. In what appears to have been a coordinated takedown of open interest, the gold price rose. This is shown in our next chart.

To have the gold price rising while open interest is falling indicates a bear squeeze in progress. This one is unprecedented. But since open interest bottomed on 8 April, it has begun to rise again. What appears to be happening is further attempts to close short positions are being resisted by determined buyers taking the opportunity to rebuild positions.

The problem for swaps traders is shown in our next chart, which is updated to 21 April, the last available Commitment of Traders release. 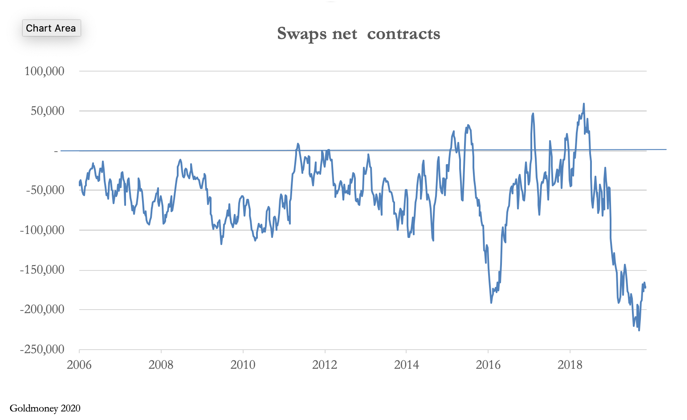 They were net short of 171,620 contracts, still an extreme position, particularly when every major central bank is promising limitless monetary inflation.

Furthermore, the largest four traders have been unable to reduce their positions, shown in the spreadsheet below. 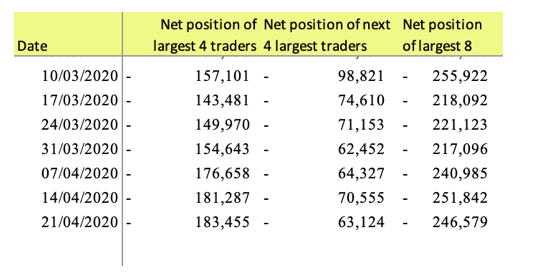 Their net shorts have been climbing remorselessly since 17 March, and it is certainly possible that one of the large four has a disproportionate number of these shorts. Now that open interest appears to be picking up again the swaps and the largest four traders face a renewed squeeze on their positions.

If the Commitment of Traders figures for last Tuesday, due to be released tonight, show either the swaps or the largest four traders are still in trouble, then we should brace ourselves for a possible clearing member default. Low turnover in Comex gold indicates the short positions are still very much a problem.

The whole episode must have been a wake-up call to complacent traders, and as a result Comex precious metal futures are bound to diminish as a force. Comex has been the means by which the establishment controls gold prices. The expansion of open interest absorbs speculative demand, diverting it from physical markets. Furthermore, the designation of Comex contracts and options as regulated investments while physical metals are unregulated has encouraged investment funds to restrict their speculative involvement to futures and options, without putting a strain on unallocated bullion stocks.

But physical ETFs are increasingly absorbing London vault liquidity, which is adding pressure onto paper markets. It is hardly surprising that Scotia Bank this week announced it was closing all its precious metals business. Undoubtedly, more will follow.