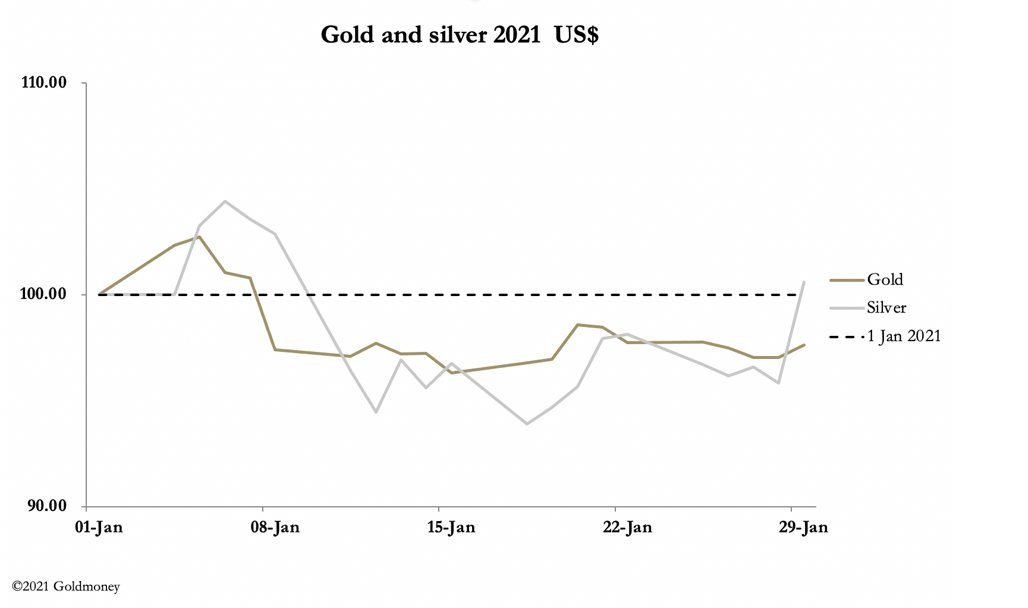 Gold and silver drifted lower until yesterday, when out of the blue the silver price took off, gaining 6.4% at one point. Gold went with it, rising by 1.2% before it was slammed for no change on the day. From last Friday’s close gold was unchanged at $1855 in European morning trading today, but silver was up $1.60 at $27.00.

The squeeze in silver appears to have been triggered by day-traders on exchanges such as Robinhood switching their attention to SLV, the big silver ETF, with chatrooms such as Reddit pushing the narrative. It continues this morning, with silver up 44 cents at the time of writing, and gold up ten dollars.

That a gang of day-trading individuals, often with no more than a few hundred dollars to trade, can take control of silver has far-reaching implications. The price response was not limited to silver and similar rises at the same time (0830 EST) were observed in gold, platinum, palladium and even US oil. This morning, bitcoin has jumped 13%: is that a belated reaction? It will be interesting if the Robinhood gang has another crack at silver by the time this report is published in late afternoon EST.

Small trader activism against the establishment is a relatively new and rapidly evolving development. So far, it has been restricted to individual stocks, such as GameStop, Bedbath & Beyond, Nokia and American Airlines, stocks with high levels of short interest. Doubtless, it was an understanding of the tight physical supply constraints for silver that for the first time pushed a commodity in ETF form into the frame.

At net short nearly 100,000,000 ounces and with little or no float in London, the bullion banks (Swaps category) on Comex are bound to be hypersensitive to this form of activist disruption. But as the next chart shows, this is not even an extreme short position for the silver contract.

Instead, the significant bullion bank short position is in gold, as our next chart illustrates. 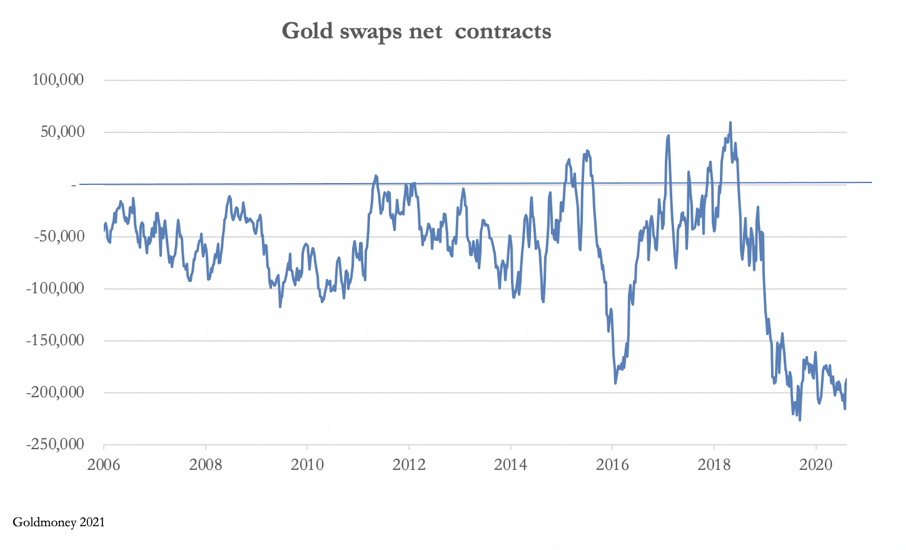 Since December 2019, when the swaps’ net position breached the previous record seen in July 2016, they have consistently failed to close their shorts to more comfortable levels. Imagine being a bullion bank trader seeing your less liquid short silver position blow up and being aware that the only deliverable gold in size is in the Comex vaults. That these vaults could now empty quickly must be a terrifying prospect.

For everyone in the financial system, the potential instability from this new version of Occupy Wall Street is a significant development. It should provoke damage limitations from the authorities. But if they are reluctant to close down speculation in cryptocurrencies, it is hard to see that they have the will to face up to the mess on Comex that trading in gold and silver contracts has become before too late.

With the bullion bank’s short position of 100m ounces and little physical liquidity in London, it doesn’t take much to put a rocket under the silver price, as we are now seeing. It could also destabilise other precious metal Comex contracts.