It was a quieter week for GoldMoney customers ahead of the Federal Reserve Open Market Committee (FOMC) meeting on Wednesday, although activity increased slightly after with a marked change in direction with regard to silver.

Silver loses its physical shine
After several weeks of buying from the online precious metals dealer's customers, silver has lost its shine according to Dealing Manager at GoldMoney, Kelly-Ann Kearsey, 'Customers have been actively tracking the markets this week as we've seen silver selling ahead of the FOMC meeting. Obviously silver is an industrial metal and prone to more volatility, so our customers have decided that now is the time to sell some of the white metal, and instead we've seen a return to gold fever.'

The graph below shows the complete turnaround in gold and silver buying interest from GoldMoney's customers compared to last week: 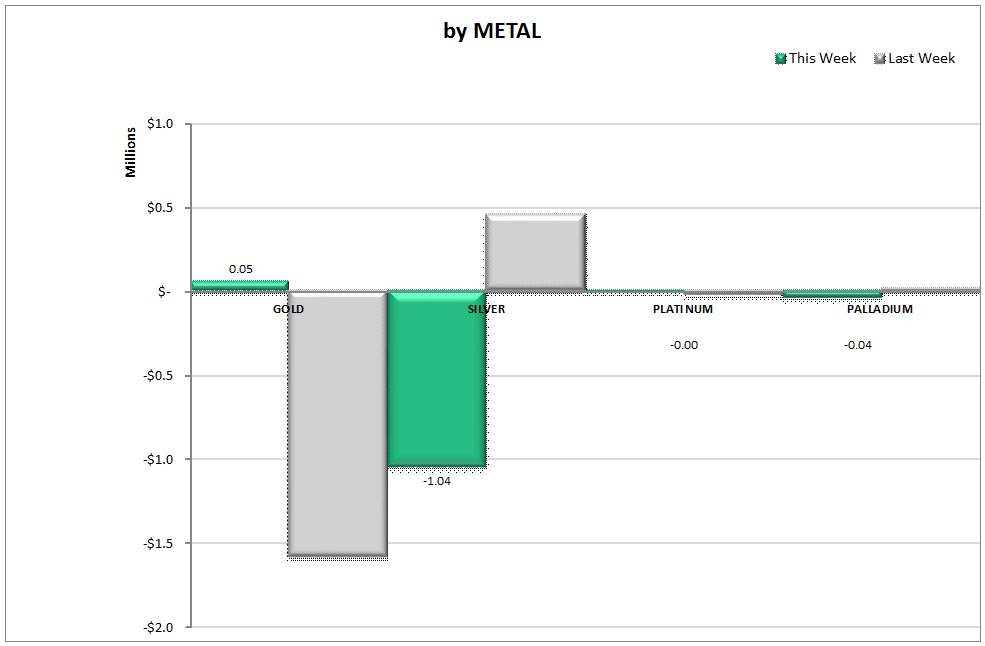 Gold glistens again
'We saw a big order of gold into our Swiss vaults, for the second week in a row.' Says Kelly-Ann, this is again a change from the recent trend of selling out of the western vaults and into our eastern ones, particularly Singapore. That's not to say that Singapore wasn't a big recipient, it was, with UK vaults seeing the selling. Gold prices have dropped a little since the FOMC meeting as gold's inflationary hedge attraction declined. However, following the weaker than expected US Durable Goods orders, and amid continued fears about Europe and the Greek economy, we're seeing buying interest from those wishing to protect their portfolios against potentially more price sensitive investments.

Where to Next?
'There have definitely been more buyers than sellers this week despite the quieter trading, and there are clearly some concerns around the industrial precious metals. Platinum has remained below gold's price. The stronger US Dollar and lower oil prices are countering gold's appeal generally, but while economic robustness remains in question, it will still see continued interest from those seeking a safe haven for their money.'