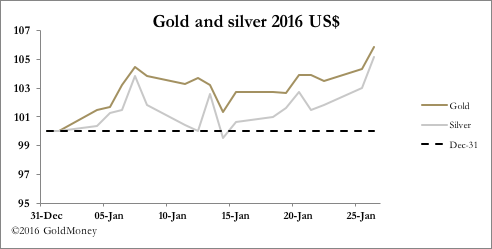 Gold and silver continued their rise, feeding on the problems facing equities as they try to adjust to the downgrading of the US's growth prospects.

There was an attempt yesterday to mark the gold price down from Wednesday's rise, which persisted into this morning's early trading.

Silver remains a narrow market, which was dramatically proven at the midday fix yesterday (Thursday). Ahead of the fix, silver was trading at $14.42, and the fix itself, which took fourteen minutes, was finally settled at $13.58. The circumstantial evidence behind this extraordinary price behavior was there were over-the-counter market options expiring on the fix price. An unknown number of call options therefore expired worthless, having had considerable value at 11.59AM.

It is of course possible that there was a large genuine seller, but this looks like price-rigging. The LBMA has overall responsibility for the operation of the silver market, and it somewhat reluctantly agreed to modernize the market. The move of the daily fix to a new platform run jointly by CME and Thompson Reuters was meant to be an improvement on the old fix. Doubtless any manipulation of the price will have been done within the rules: after all, if you have a big seller which can push the market price down and subsequently benefit, is this not the normal cut and thrust of unregulated markets?

Those of us who value openness in markets will want this to be thoroughly investigated, as doubtless will the option-holders who lost money.

Gold has outperformed nearly all alternative asset classes, with the 30-year US Treasury closest in performance, rising 4.4% since 31st December, against gold's rise of 5.3%. Meanwhile, the S&P 500 Index has fallen by 8% over the same time frame.

The next chart shows the performance of gold in the four major currencies since 31 December, and it is evident that sterling's weakness has given excellent returns of 8% for UK-based investors holding physical bullion. 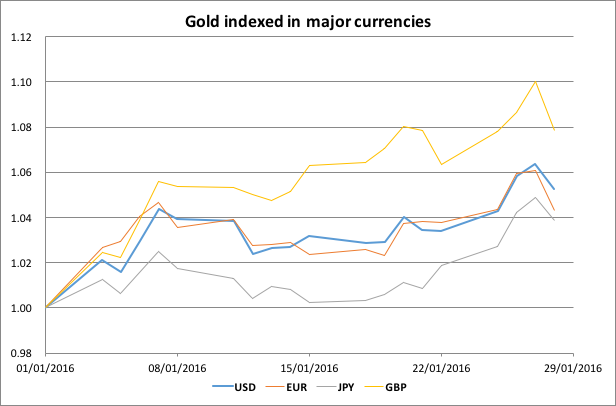 We now turn our attention to the futures market where hedge funds, having recently held a record short position in gold futures, have been moderately squeezed. This is evident in the next chart, which is of the daily closing gold price and the open interest.

Since the peak in open interest of 425,659 contracts on 7 January, it plummeted to 382,000 on Wednesday, the last confirmed figure at the time of writing. At the same time the gold price rose $20 from $1107 to Wednesday's close at $1127. Normally, one would expect a rising gold price to be accompanied by increasing open interest, because buyers would be opening new long positions. However, the reverse is happening, which can only mean the bears are closing and there is not much genuine buying.

The mystery here is that with the hedge funds so wrong-footed, the market-makers would be be expected to ramp up the gold price to close their corresponding shorts for the most profit. The lack of this action is as unnatural as yesterday's apparent gaming of the silver fix. This leaves us with a question hanging in the air: why are the bullion banks sitting on the gold price when there is easy money to be made?

Lastly a brief mention of the Fed's statement on Wednesday: it thinks it was right to raise the Fed Funds Rate target in December, but further rate rises might be on hold. Given that central bankers regularly talk to each other, it would be interesting to know what they think of last night's negative interest rate move by the Bank of Japan, and whether or not the outlook is still hunky-dory for America.