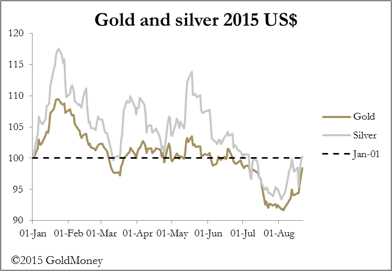 This week market relationships underwent a sea-change, with a sudden realisation that the global economy is in a deepening crisis.

Equity valuations in the developed nations are falling sharply and corporate bond spreads are widening, triggering a flight to the relative safety of government bonds. Gold and silver prices have recovered somewhat this week, with gold now 9% up from its lows of six weeks ago, and silver 8%.

While this has been encouraging for followers of precious metals, it is probably realistic to describe their performance so far as evidence of a developing bear squeeze and not yet a sign of something more material. Bears being closed out should be evident from a fall in open interest on the futures market, and this may be true in silver, which is our next chart. 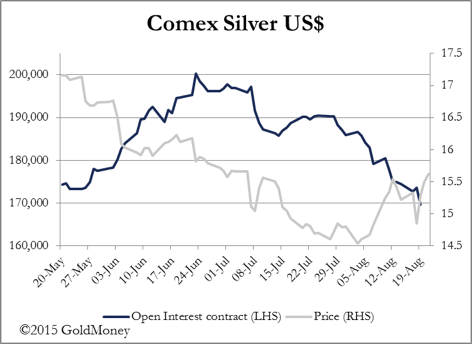 Note how open interest continued to fall after early August, despite the price recovery. Another reason for OI to drop off is the September contract is winding down, so spread positions were being reduced accounting for much of the fall. If this is so, then short positions in the managed money category will still be uncomfortably high.

This is not so evident in gold, which is next. 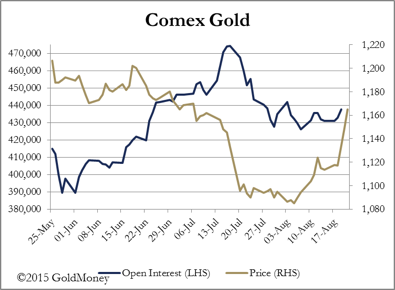 In this case, open interest has steadied since early August, only picking up slightly in the last few days. It could be that new spreads are being opened, rather than new bull positions, but we shall only know for certain when the Commitment of Traders Report is published this evening.

China's series of minor changes to the yuan/dollar rate has triggered, or at least coincided with weaknesses in emerging market currencies, verging on a crash in some instances. The Khazak tenge lost 23% in one day as oil prices slid lower, and the Turkish lira, which has a poor history, has also fallen sharply on political turmoil. Other weakening EM currencies range from Brazil to South Korea, and Thailand to South Africa. Old hands are reminded of the Asian crisis in 1997, which started in a minor way with the Thai baht coming under pressure, spreading to other South East Asian currencies and becoming a full blown regional crisis.

Many of the factors that drove these currencies into a sharp devaluation are present today on a wider and larger scale, with nearly all equity indices firmly entrenched in bear markets. Investors are shifting their perceptions from chasing equity uptrends to protecting themselves, aware that if emerging markets sink further there is a risk of a full-scale rout developing. That being the case, gold prices should benefit considerably from accelerated buying of physical metal throughout Asia.

It seems improbable that the Fed and the Bank of England will persist in their desire to raise interest rates, particularly since the S&P500 and the FTSE are reflecting growing investor panic. Instead, unless equities stabilise of their own accord, there will be a growing likelihood of a new round of quantitative easing aimed at supporting the markets.

To summarise, precious metals prices are rapidly switching from an entrenched bear market to conditions that could drive prices significantly higher over the medium term.