After last week’s sharp rally, gold and silver failed to follow through this week ahead of the quarter-end. Gold lost $24 from last Friday’s close to trade at $1324 in morning trade in Europe today (Thursday) and silver lost 33 cents to end up at $16.25. Despite a shortened week for European and Canadian markets, volumes in futures markets for both gold and silver were reasonably healthy. 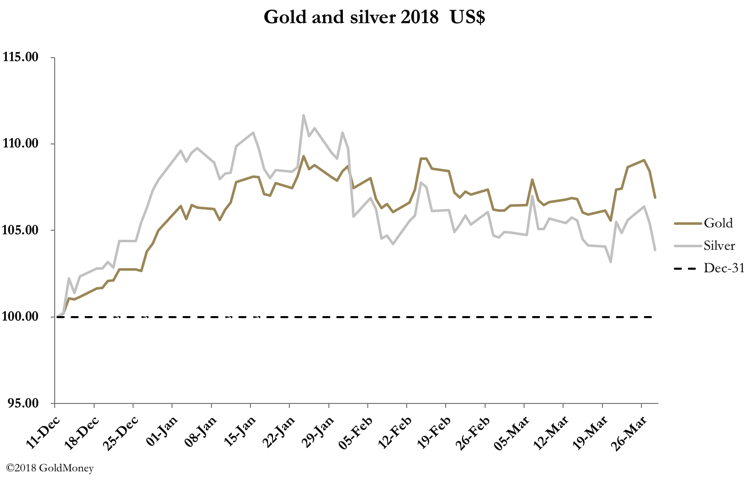 An important influence this week has been the run-up to the end of the first quarter, when traders at bullion banks, who are perennially short, value their positions. It is generally in their interests to see quarter-end prices as low as possible, and there can be little doubt that this motivation has been present. At the same time, the April gold contract has been running off the board, putting additional selling pressure on the price. As a result, gold’s open interest has fallen from a healthy 564,301 contracts to a more moderate level of 510,034 contracts.

Precious metals have also faced the headwind of a minor dollar rally, which on the trade-weighted index has risen 0.6% from last Friday. This is insignificant but has served to deter buying interest in gold.

In the futures markets, the most extraordinary performance has been silver, which has become yet more oversold, as the following chart of managed money’s net positions shows. 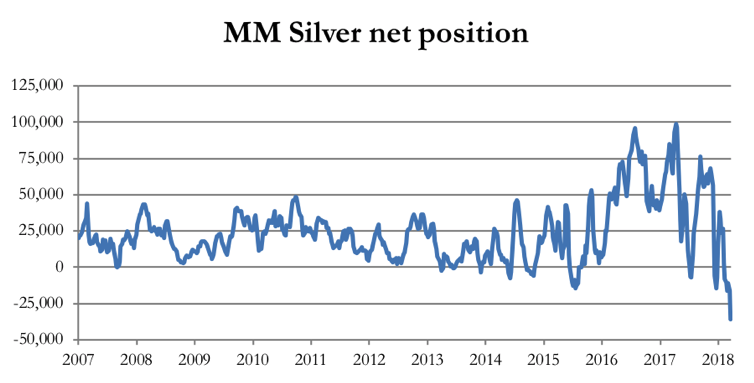 It is unusual for the managed money category, i.e. hedge funds, to be net short of silver. This extreme of -35,833 contracts was recorded on 20 March and will be updated as of 27 March after-hours tomorrow. Actual shorts were a record 68,342 contracts, in a market which lacks the liquidity to allow such an extreme position to unwind easily.

Since these Commitment of Traders figures were released, trading volumes for silver have been healthy, and after last week’s rally, the price has been sold back down towards recent lows. Open interest, which was already high on 20 March at 216,042 contracts, has increased further to 227,334, not much short of the all-time record of 234,787 contracts last April.

It is a mystery why hedge funds have taken such an extreme position in silver. Perhaps a silver short is regarded as a geared play on a rising dollar. Base metals have all been weak over the last month, as Chinese speculative positions have come under pressure. Perhaps it is a combination of these factors that drives speculators to short silver on Comex.

While silver has become very oversold, gold is broadly neutral on the overbought/oversold scale. It is still in the consolidation band referred to in previous market reports, as illustrated in the chart below by the pecked lines. 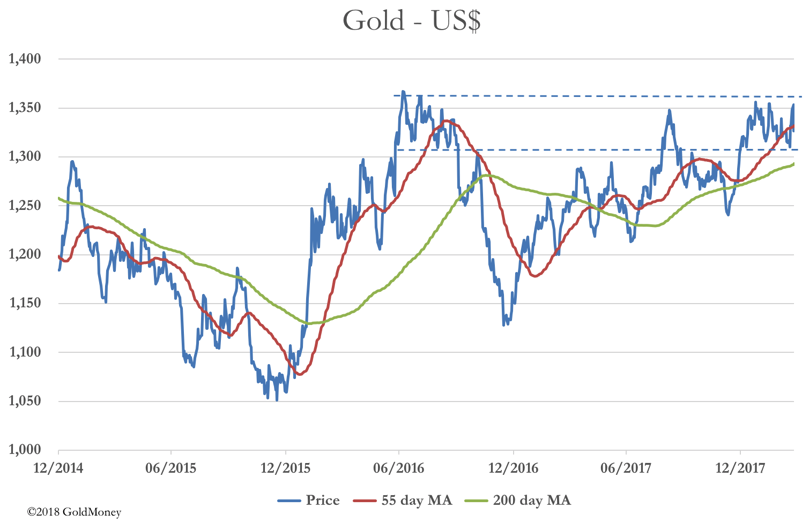 Technically, gold looks well-based, but there is always a possibility the price might test the 200-day moving average, currently at $1290. Alternatively, when quarter-enditis is behind us and if gold breaks the $1360 level, it will have completed a base for a more substantial and sustained rally.