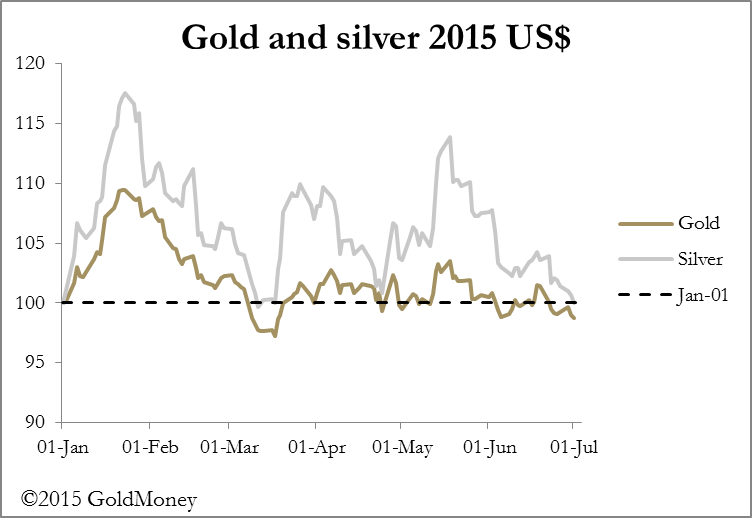 Gold and silver had a poor week, with no relief from drifting prices after the end of the second quarter.

The gold price opened on Monday morning in the Far East at $1,187 and fell to a low point at $1,158 yesterday. Silver mirrored gold's move falling from $16.05 to $15.50. Both metals rallied yesterday afternoon with gold down slightly but silver up 14 cents. In early European trading this morning there were further small gains.

The news this week was dominated by Greece, which should have led to European demand for gold, and it was indeed reported that Greeks were buyers of British sovereigns and that European bullion demand picked up somewhat from low levels. Precious metals were otherwise side-lined and left to drift in markets dominated by central bank intervention in foreign exchanges, with the Swiss National Bank triggering a very strong rally in the euro on Monday, driving the rate from an overnight low below 1.1000 to the US dollar to 1.1270.

This rally in the euro was counterintuitive given the Eurozone crisis. Central banks must have been on red alert over last weekend when it became clear that Greece was going to default on an IMF loan repayment and that her banks were going to remain closed for the whole week ahead of this Sunday's referendum. The result is that the euro showed every sign of being closely managed.

The excitement in the Eurozone has obscured the collapse in China's stock markets, with the Shanghai index crashing 30% in little more than a fortnight. And yesterday, the US's Labour Force Participation Rate fell to its lowest since 1977, indicating the US is dipping back towards recession. While China is facing a contracting credit bubble, the US economy is simply stalling; both developments implying global monetary policies are likely to gain a new inflationary impetus.

While this implies higher prices for precious metals in the medium term, the bears point to gold's disappointing performance during the Greek crisis. Furthermore oil prices have continued their decline which is also regarded as a negative factor.

The underlying vested interest is the high level of short positions on Comex, which showed no sign of being unwound in the first few trading days of the new financial quarter. This is shown in the chart below, which demonstrates increasing open Interest in Comex gold futures, despite a falling price over the last fortnight. 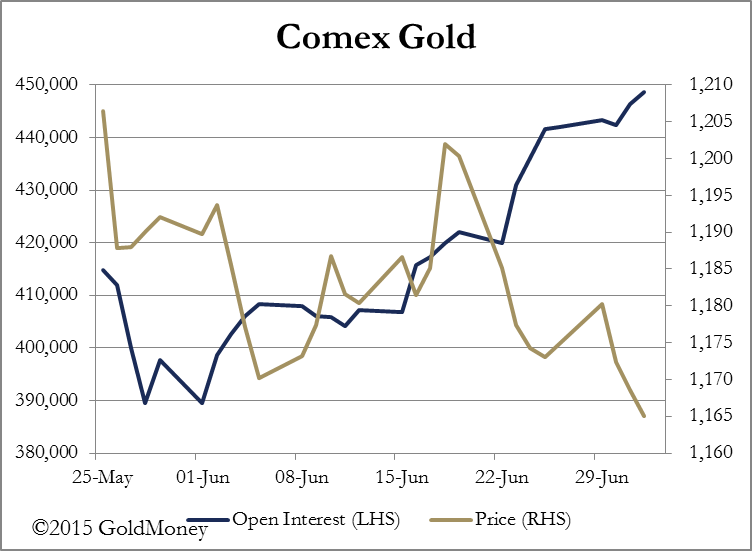 In the last Disaggregated Traders Report the Managed Money category had record short positions, and this bearish momentum has held for the moment. While the prospects for today suggest a modest rally on bear-closing on Comex's Globex platform ahead of the weekend, US markets are closed for the Independence Day public holiday.

In other news, China is stepping up her involvement with gold, having announced the Shanghai Gold Exchange will introduce a gold fix priced in yuan by the year end, and this coincides with the Bank of China's application to become a direct participant in the London bullion market. Combined these moves can be regarded as a tentative move towards a floating gold-renminbi conversion rate. This being the case, it will be an important step towards the remonetisation of gold.