Market Report: Precious metals hold their own over Q1

Gold priced in dollars hardly changed over the first quarter of 2015, but silver performed strongly, up 7%. 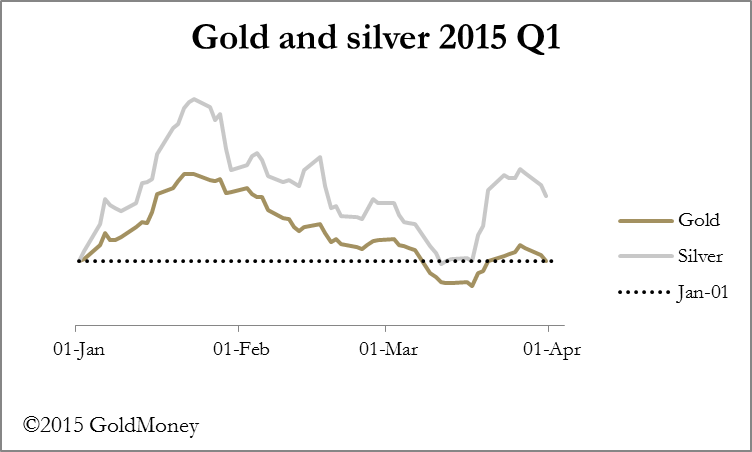 In generally choppy markets across all asset classes silver was bettered only by the Nikkei 225 Index. This compares with the NASDAQ up 3%, the US long bond up 2.6%, and the Standard &Poors up 1%.

The consensus opinion that the dollar will continue rising is almost total, which is the other side of the gold trade. But while the dollar has risen, gold has not fallen: in other currencies it has gained, the principal exception being priced in yen, which has been consolidating against the dollar after last year's weakness. Gold priced in the other major currencies is shown in the next chart. 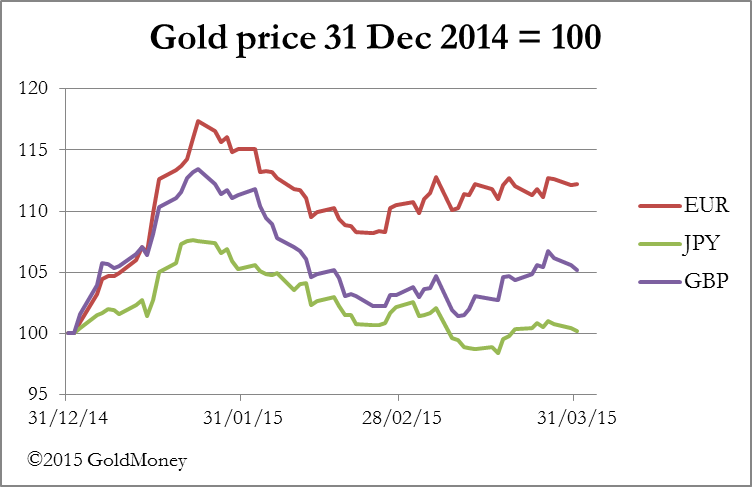 Being unchanged in dollars over the quarter, gold outperformed most other asset classes, with crude oil down 15%, the euro 12.2%, sterling 5.1%, and copper 2.2%. The performance of both gold and silver is against a background of growing pessimism about global deflation relative to the US, with the Managed Money (MM) category for gold on Comex increasing short positions to record levels, shown in the next chart which is updated to Tuesday last week. 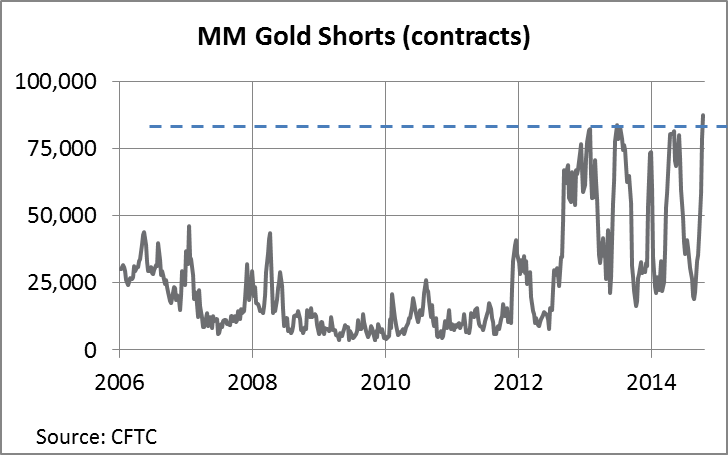 Hedge funds selling gold futures are buying the dollar and not necessarily expressing a view about gold, other than something has to be sold to buy the dollar. Therefore, if there is a change in sentiment against the dollar, this could have a dramatic effect on gold and silver prices because it would almost certainly trigger a substantial bear squeeze.

This market condition appeared to drive prices higher in trading on Wednesday, the first day of the new quarter. Up to that point a range of markets appeared weak ahead of quarter-end book-squaring, an influence that has now passed. Gold rose as much as $27, or over 2% on Wednesday before settling at $1204. Silver moved up as much as $0.55, or 3.3%, before settling at $16.95.

Overall, trading is subdued by the Easter break, with many markets closed on both Good Friday and Easter Monday.

Looking forward into the second quarter, the principal concern has to be the unanimity of opinion that the dollar reigns as king over everything else. The certainty with which the overwhelming majority of hedge funds, banks and other investors hold this view is reminiscent of investor psychology in September 1987, when just a few weeks' later equity markets suddenly crashed for no reason other than everyone was fully invested and no one left to buy. If the dollar does have a major correction, it should be reflected in an improved outlook for precious metals starting from a sound base.

Disclaimer - The views and opinions expressed in the article are those of the author and do not necessarily reflect those of GoldMoney, unless expressly stated. Please note that neither GoldMoney nor any of its representatives provide financial, legal, tax, investment or other advice. Such advice should be sought form an independent regulated person or body who is suitably qualified to do so. Any information provided in this article is provided solely as general market commentary and does not constitute advice. GoldMoney will not accept liability for any loss or damage, which may arise directly or indirectly from your use of or reliance on such information.