The US dollar eased this week when Janet Yellen of the Fed gave her semi-annual report on monetary policy to Congress.

It was no surprise that Ms Yellen hinted at caution over interest rates due to external events, such as the outlook for the Eurozone and uncertainty over China, but overall she was careful to be non-committal.

Following her testimony an easing dollar provided support for precious metals with gold having tested the $1190 level twice, last Friday and Tuesday, forming a short-term double bottom. This indicates good technical support in the short-term at least. Silver followed this same pattern finding similar support at $16.00. Precious metal prices improved yesterday as the dollar rallied on some bear-closing and notable weakness in the euro. The result is gold and silver rose marginally on the week by early London trading this morning.

The chart below shows gold and its Open Interest on Comex. 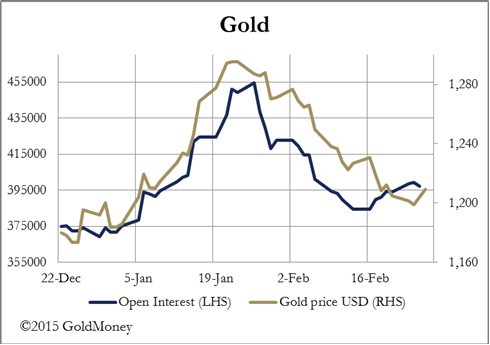 Open interest improved this week, giving advance warning that buyers are beginning to accumulate gold contracts on dips. We saw a repetitive pattern of physical buying overnight in Asia and on the London opening, followed by futures selling during US trading hours. What is interesting is that the passing of the Chinese New Year was expected to reduce physical demand. Instead, bullion demand appears to have picked up, probably reflecting Russian and other central bank buying. Russia withdrew from the market in January, apparently unprepared to chase higher prices, which suggests that their strategy is to accumulate on dips.

The stubbornly high level of Open Interest in silver has at last reduced somewhat as shown in our second chart. 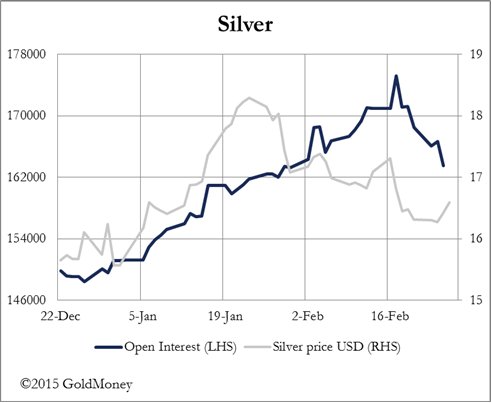 Some of the shorts have managed to reduce their exposure. However, intraday trading this week was still consistent with remaining short positions being squeezed.

Our last chart shows the performance of platinum and palladium so far this year. Palladium has been the better performer thanks to a strong rally this week. Could this be an indictation of things to come for gold and silver as well? 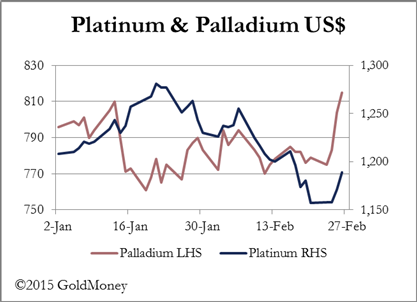 There was no report from the Shanghai Gold Exchange this morning, due to the Chinese New Year.

The euro
The euro's future could become an important factor. In today's analysis I point out that the euro's inherent weaknesses may undermine its credibility in coming months. This will have two effects: firstly, and most obviously, it increases economic and systemic risks for the Eurozone and therefore the rest of the world; and secondly, it is likely to lead to a new source of demand for physical gold. It is easy to forget that Europeans have a long history of being avid gold hoarders in troubled times.