By Alasdair Macleod
Market Updates May 27, 2016 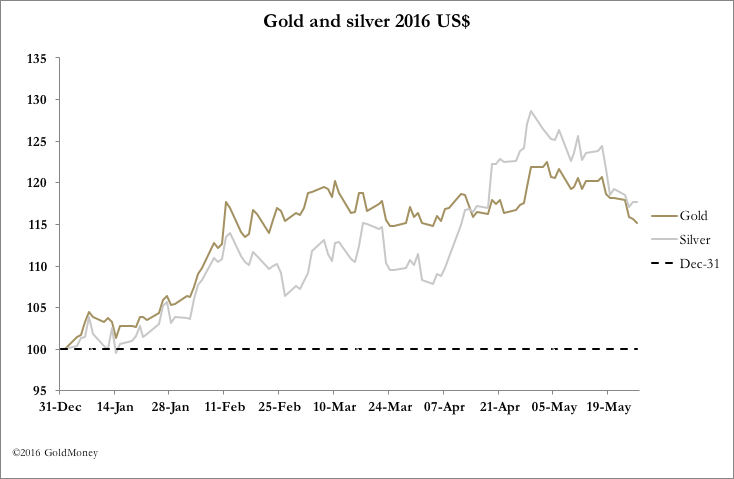 It is a continuation of the previous week’s trend, which saw larger falls. To date, from 1st January the dollar price of gold this morning in early European trade is up 15.14%, and silver 17.7%. So even though prices have fallen this month, holders of precious metals have done better than those exposed to other asset classes.

A notable feature has been the sharp contraction of gold’s open interest on Comex, which over the last eight trading sessions has contracted 71,400 contracts to a more normal 525,094 figure. This contraction broadly correlates with the fall in the gold price, as shown in our second chart.

The relationship between price and open interest shows that the ramp-up at the end of April, having initially failed to stop the price rising, managed to suppress it from the 4th May onwards. As an operation to stop the gold price rising, it appears that the bullion banks not only succeeded, but made substantial profits as well, closing their bears from the $1275 level into a falling market from 17th May onwards. This is beautifully illustrated in the next chart, of net swap positions, which rose to a record net negative 141,232 contracts on 17th May (the last recorded date at the time of writing). 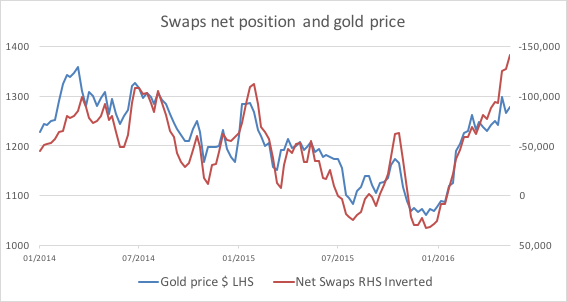 At a guess, this category alone will have reduced its net position by about 50,000 contracts since 17th May / $1279, making profits between $150-200m. Oh, for the joys of being able to print short contracts without limitation!

The position in silver is notably different, with silver remaining overbought and open interest hardly reducing at all. This is shown in the next chart. 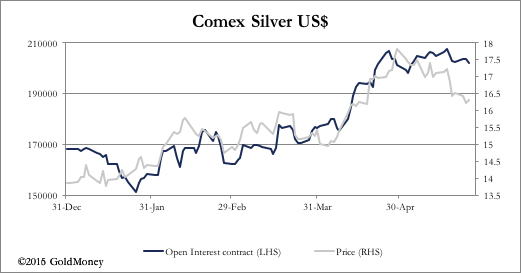 Notice the divergence between price and open interest. OI has fallen only 5,500 contracts since 17th May, while the price has dropped 8%. Could it be that the swaps will target silver next?

It cannot be ruled out, because the hedge funds are still net long to a significant degree. However, in day-to-day trading, silver has recently held up well when gold has been weak, which might indicate a pick-up in industrial demand, relative to physical supply, at current levels.

In analysing market trading in precious metals, we cannot ignore developments in the US dollar. After all, speculators do not so much buy or sell gold, rather they sell or buy the dollar. Gold is just one of the counterparty assets involved, the others being in a number of categories: US Treasuries, if it is an inflation or interest rate play, currencies for factors specific to the pairs, commodity indices for interest rates and prospective economic demand, and gold for interest rates and systemic risk. So it is no coincidence that the Fed’s attempts to jaw-bone markets away from negative dollar rates and back to “normalisation” has softened precious metals.