Market Report: PMs appear to be breaking out 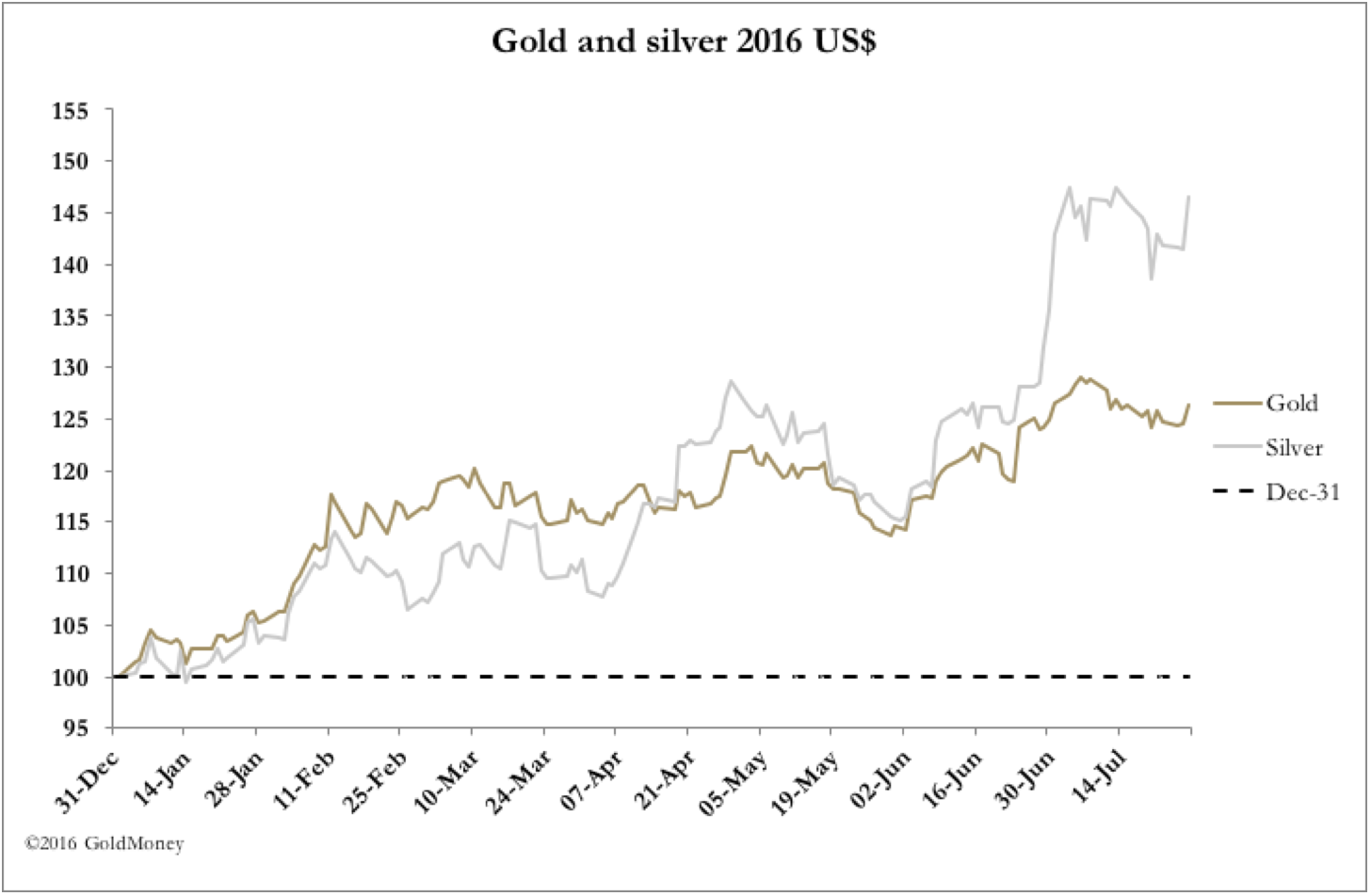 Gold and silver drifted this week, continuing last Friday’s end-of-week profit-taking, until the FOMC announced on Wednesday afternoon EST that there was to be no change in the Fed Funds Rate.

This was the signal for gold to gain some $20 and silver 75 cents. These moves represented an apparent break-out from the last month’s consolidation, and prices for both metals could now be on course to challenge the highs of early July.

Yesterday was a day of consolidation with a fall for gold limited to $2.50, and this morning in early European trade gold opened slightly lower still, at $1330, and silver at $20.00.

This market report will be longer than normal, because there is much to tell about what is going on behind the scenes. Some market followers, presumably relying on overbought indicators, such as the record longs held by the Managed Money category on Comex, were telling us earlier this week that the gold price was due a substantial fall.

Furthermore, the maturing August contract, which ahead of its delivery month ran off yesterday, has been a negative factor. Large amounts have been rolled over into the December contract, a situation that normally allows the bullion banks to work prices sharply lower as Open Interest contracts.

While gold’s OI has indeed contracted from record highs, the bullion banks have had only limited success in this quest, and the negative price effect is now behind us.

The underlying market for gold feels rock-solid. Part of the reason lies in the physical market (I’ll return to futures shortly). Asian demand has fallen significantly, for the simple reason that it is mostly in the form of jewellery. This year, prices have risen in yuan by 28% and by 26% in rupees. Until retail buyers become more accustomed to these higher prices, it is hard to imagine Mrs Wang and Mrs Patel continuing to buy jewellery with gusto. The result, fortuitously, is that some supply has come available to satisfy European and US ETF demand.

A number of refiners in the Middle East have been caught out by the switch, and ended up with an accumulation of unwanted inventory destined for the Asian markets. Financing large gold inventories is too costly for refiners operating on thin margins, so they have been forced to sell product to the Swiss refiners. This was reflected in a surprise export of 48 tonnes from the United Arab Republic to Switzerland in June, which was recast into LBMA standard bars for London and the US ETFs. Therefore, the price consolidation over recent weeks was partly due to the absorption of a one-off inventory unwind from the Middle-East.

That negative factor has now diminished. The pace of supply to western investors was artificially high on a temporary basis, and this excess of bullion should now slacken. Assuming demand momentum in western markets is maintained, this should help ensure bullion prices begin their next advance.

Turning to futures, it seems almost certain now that investing institutions are beginning to use Comex futures to maintain strategic portfolio allocations. We must remember that owning physical gold is a compliance problem for regular fund managers, because it is not a regulated investment. They can hold ETFs, but internal fund rules will limit ownership of any one security. Regulated futures present an efficient means of maintaining additional exposure to a particular asset class for the purpose of maintaining a medium to long-term portfolio allocation, and a good futures broker can minimise dealing costs.

This could explain why gold’s Open Interest remains at relatively elevated levels, and why the Managed Money category has become seemingly impervious to short-term movements. The next chart shows the Managed Money net position, and how extended it had become by 19 July.

The fall in Open Interest since then indicates this position will have corrected somewhat, but it will still be very high. The stickiness of new players also explains why the rapid run-off in the August contract has had less impact on the price than might be expected.

The fact that there has been the normal book-squaring without a substantial price fall indicates other forces are at work, and must be a major concern for the bullion banks that are short. If this analysis is correct, there is the unusual potential for a bear squeeze on the bullion banks in the coming weeks now the August contract is done and dusted, as they seek to limit their losses.

The situation is more extreme in silver, where Open Interest refuses to fall. After a slow start to the year, silver has now caught up with gold, and the gold/silver ratio has fallen to the mid-sixties. The extent of this move is reflected in our third chart. 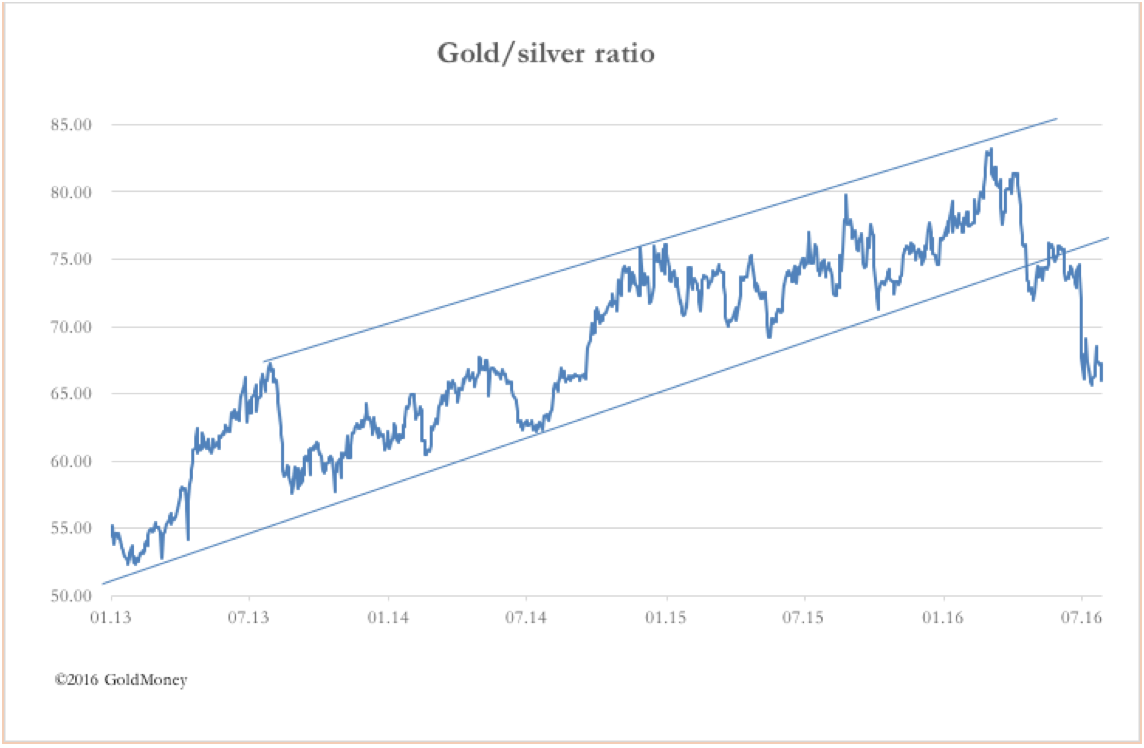 On Wednesday, the Fed decided not to raise interest rates yet again, and it is becoming apparent they will only raise rates when they really have to. Therefore, there is probably a less than 50% chance that they will be raised by next January.

Today (Friday) should see the ECB’s stress tests announced. These are usually dumbed down, with banks in the past failing soon after being given the all-clear, an historical experience that seems set to undermine share prices of the weaker banks in the coming weeks. At the same time, the Italian banking crisis appears to be coming to a head, and depositors are receiving no compensation for the risk with zero to negative interest rates.

There is currently an attempt to rescue the Italian bank, Monte Paschi, by the weekend. The rescue plan seems to be getting very little traction, and the bank could fail next week.

The outlook for UK monetary policy is still causing concern, with a number of influential economists talking negative sterling rates on the back of Brexit, and the government-controlled banking group, Royal Bank of Scotland, has also warned its business customers it may introduce negative deposit rates.

Then there’s Japan. Overnight, the Bank of Japan announced its updated simulative measures. The markets expected something extra, only to find the BoJ appears to have run out of ideas. Apart from doubling its purchases of ETFs, which stops the equity market from falling, super-expansive monetary policy is unchanged. This is likely to indicate the Keynesians in the BoJ are cooking up a new surprise for us.