It had to happen after a terrific run from early December, so a consolidation in precious metals is hardly a surprise. With gold trading at $1,337 in early European trade this morning (Friday) it is unchanged, and silver at $17.10 is down ten cents. From the low point on 11 December, gold is up 7.7% and silver 8.9% in dollars. 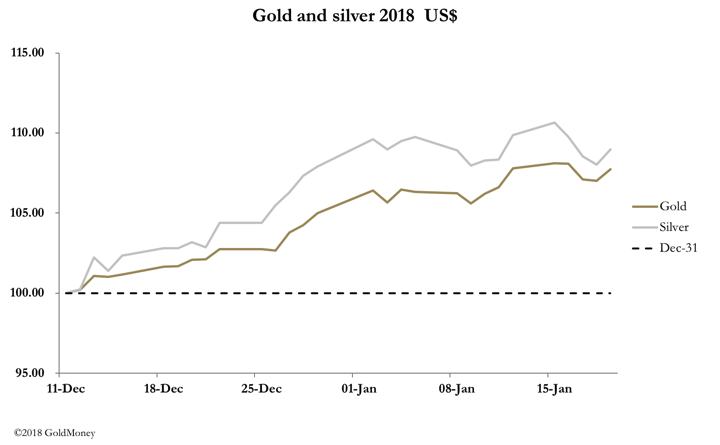 The driver has been dollar weakness. The next chart, which rebases gold at the beginning of 2017, shows performance in other currencies has been less strong. 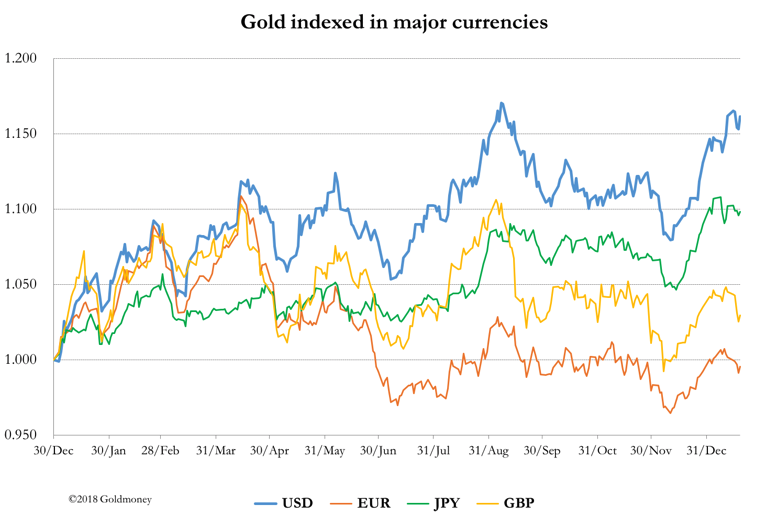 As of this morning, gold in dollars is now up 16.2% from 1 January 2017, and at the other extreme, in euros it is down 0.4%. This point is probably underappreciated by traders who think only in dollars. But the headline price is set in dollars, not least because it is the currency of Comex, and speculators use futures to capture price trends.

The dollar cash future has breached its lows set last year, causing much comment. On the other side, speculative longs in euro futures have shot up to record levels, so it’s not just gold that’s overbought.

At the same time, US Treasury yields have risen sharply, suggesting that international portfolios, as much as currency speculators, are fleeing from dollars. So far, this has been a generally unreported phenomenon. However, the Chinese rating agency Dagong Global, in comments thought to reflect Beijing’s views, said this week that the outlook for the US is negative as tax cuts worsen repayment capacity, and cut its rating to BBB+, putting the US on the same rating as Columbia and Peru and less than Russia and Botswana.

What is particularly interesting is China is the largest foreign holder of US Treasuries, with over $1.1 trillion. Why would a state-controlled credit rating agency take the unusual step of undermining the value of the largest investment category held in its reserves?

There is clearly something going on in the background. It is noticeable that another event expected to be bad for the dollar, the introduction of a yuan-denominated oil future has been delayed and delayed. The last we heard was it would probably start trading on 18th January, which was yesterday. Doubtless that story will rumble on.

It looks, on the face of it, that rather than take actions to undermine the petrodollar, the Chinese have decided to undermine the dollar itself. The politics of this may make sense, because the fall-out from a perfectly reasonable credit analysis is less open to criticism perhaps than an action to deliberately attack the petrodollar. This is of course speculation, but one can understand that substantial portfolio holdings of USD-denominated bonds are now losing money and must be extremely nervous.

We finish with an update on gold’s technical position, which in dollars is in an area of supply. Our final chart shows is still very positive, with the moving averages in bullish sequence. 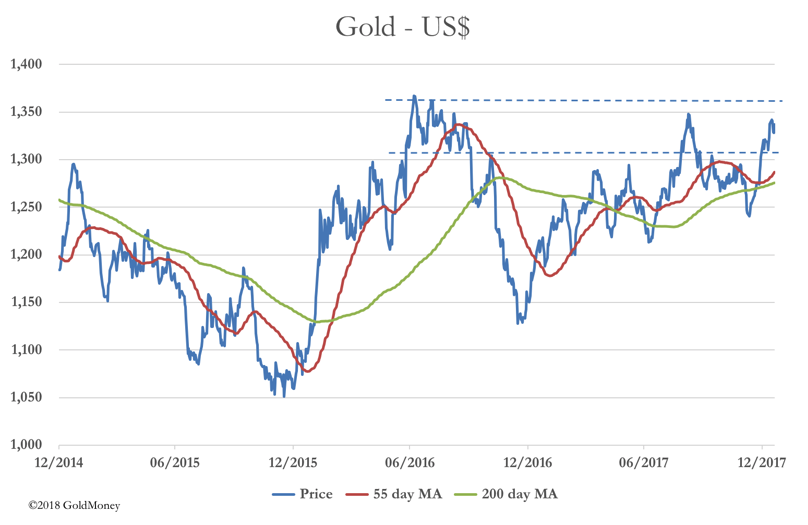 However, gold needs to overcome theoretical supply under the upper dotted line, which is at $1360. More consolidation may be necessary.