In last Friday's Market Update I commented that it is easy for bullion banks with deep pockets to move markets and change sentiment.

This week's trading in precious metals was a text-book example, with all precious metals falling sharply during New York trading on Tuesday, setting up gold for a test of the $1200 level the following day. The news background, with Greece playing an alarming game of chicken against the rest of the Eurozone, and Ukraine still moving NATO and Russia towards conflict, would normally drive precious metal prices higher as perceptions of systemic risk increase; but that would have been costly for the bullion banks with short positions. By early this morning UK time, on the week gold fell by about $20 and silver $0.55.

The position has been particularly difficult in silver for bullion banks, which fell 6% during Tuesday's bear raid on gold. Meanwhile Open Interest on Comex continues to climb as shown in the chart below. 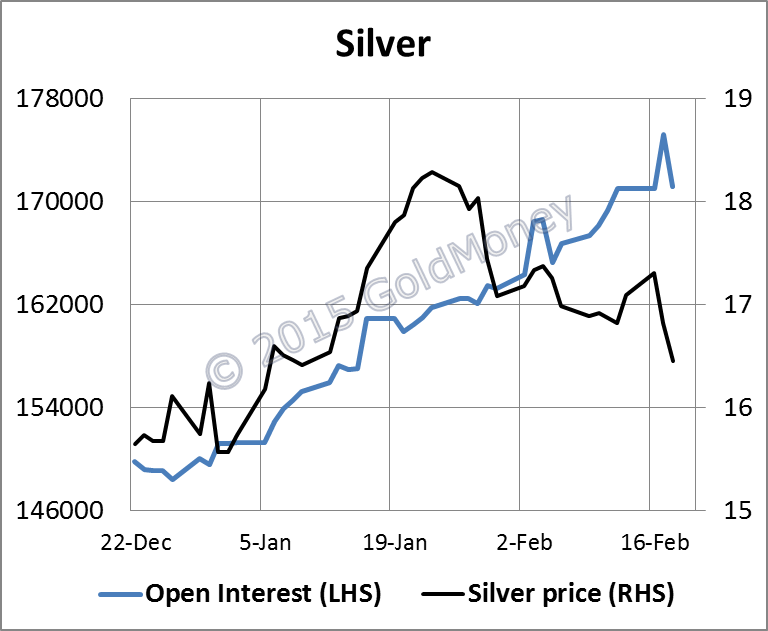 This tells us that buyers are buying despite price weakness. The tick down in the last few days has hardly dented the underlying picture. Another way of looking at it is since the peak on 23rd January, the fall in price has generated demand for the equivalent of an extra 50,000,000 ounces, which is very different from the hoped-for capitulation of the bulls.

Open interest in gold on the other hand has reduced sharply in line with the price in recent weeks, as can be seen in the next chart. 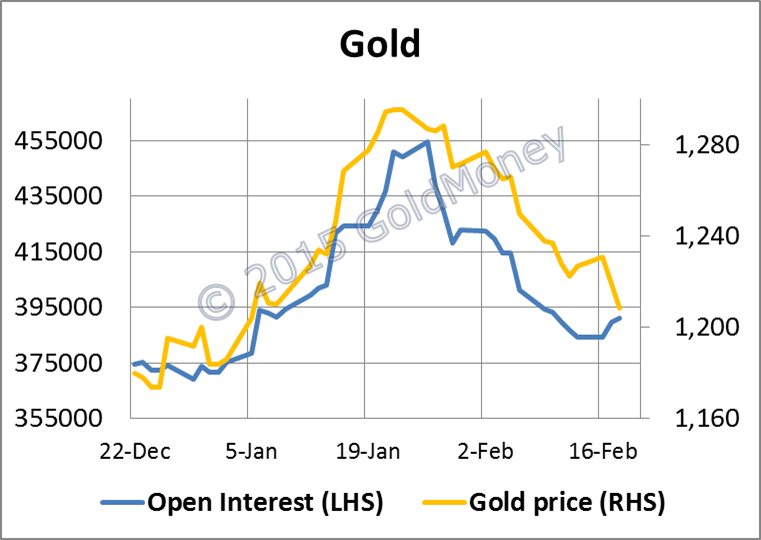 All one can say is that speculative positions in the futures market have been successfully reduced and no longer overhang the market. Not surprisingly, current market uncertainty plus the Chinese New Year has led to a decline in interest, echoed at GoldMoney's dealing desk where customer activity has been subdued.

I've already mentioned Ukraine and Greece. Of these two Greece is likely to have the greatest influence on gold and silver, because of potential damage to the euro. Bear in mind the ECB's subscribed equity is only €10.8bn, yet it has loaned the Greek banks over €65bn, mostly to cover deposit withdrawals, and it owns a further €27bn in Greek government bonds. It's the old adage about who has the problem, the customer or the bank. In this case it appears to be the ECB.
Furthermore a glance at settlements between the national central banks over the TARGET2 system* shows there is a bigger potential problem with Italy, with capital flight of €59.5bn during the second half of 2014. It therefore seems markets are being very complacent about the future of both the Eurozone and the euro itself, which is only fifteen years old and so barely established compared with the other major currencies.

For the Chinese the New Year of the goat commenced yesterday, so the talk in western markets is that gold demand from China has peaked for the moment. We shall see, but the old year went out with wholesale demand in the last full week totalling another 59 tonnes, making a total of 374 tonnes since 1st January. Perhaps there might be some bullion available for the Indian wedding season.

*TARGET2 is an interbank payment for the real-time processing of cross-border transfers throughout the European Union.