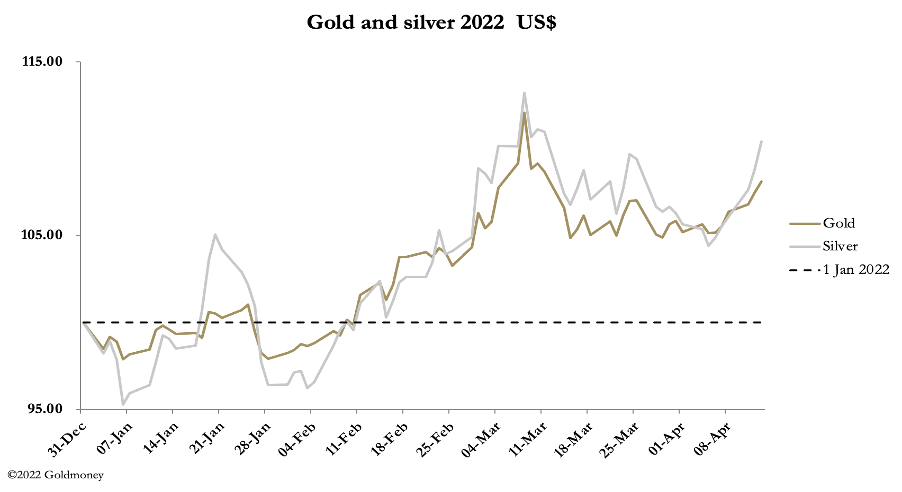 Gold and silver prices advanced this week, with Comex volumes for silver increasing, while those for gold remained subdued ahead of the Easter holidays. In European morning trade today (Thursday), gold was at $1974, up $29 from last Friday’s close, and silver at $25.67, up 95 cents over the same timescale.

The technical chart for gold looks good, with the price, having broken out of an eighteen-month consolidation pattern and reacted to find support on the 55-day moving average, is now progressing on its next upward leg. The price feels well grounded. This is next up. 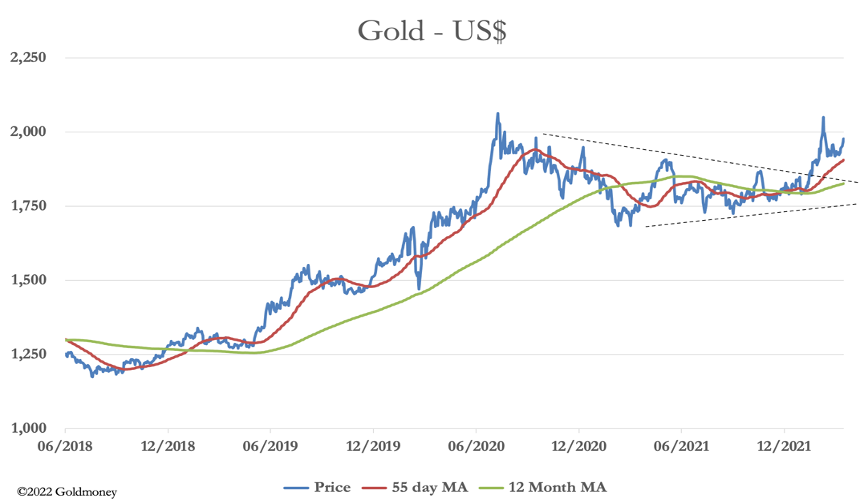 As an indicator of the general bullishness in paper markets, Open Interest on Comex has been rising, and is above the bullion banks’ comfort zone of 500,000 contracts. But clearly, it has the potential to go somewhat higher before the hedge funds feel inclined to take profits. This is our next chart. 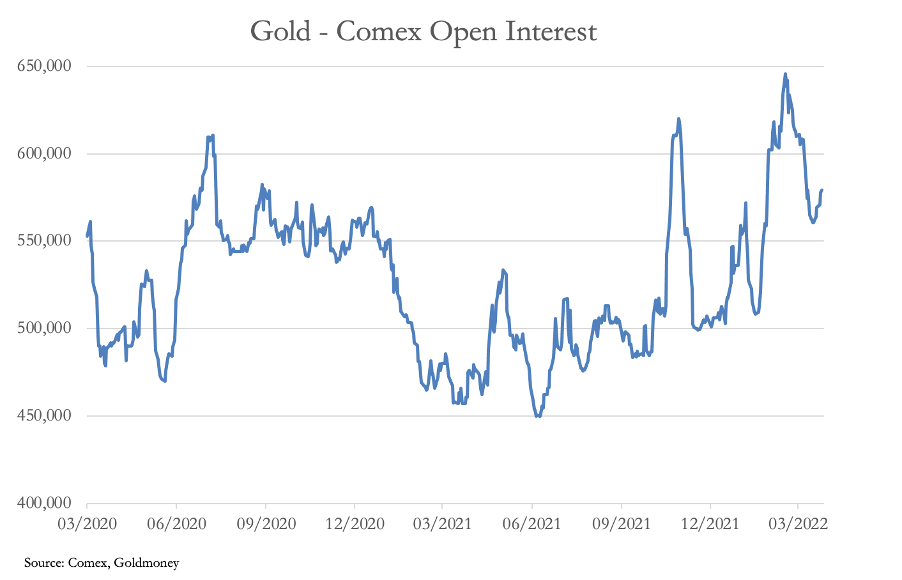 Another indicator of Comex bullishness is the net position of the Managed Money category. Over the last fifteen years the average net long position is about 110,000 contracts. On the last Commitment of Traders report, this category was net long 101,627. Since then, open interest has risen about 17,000 contracts, so even if the rise was entirely due to hedge fund bullishness (which is very unlikely), the market is far from overbought on this measure. 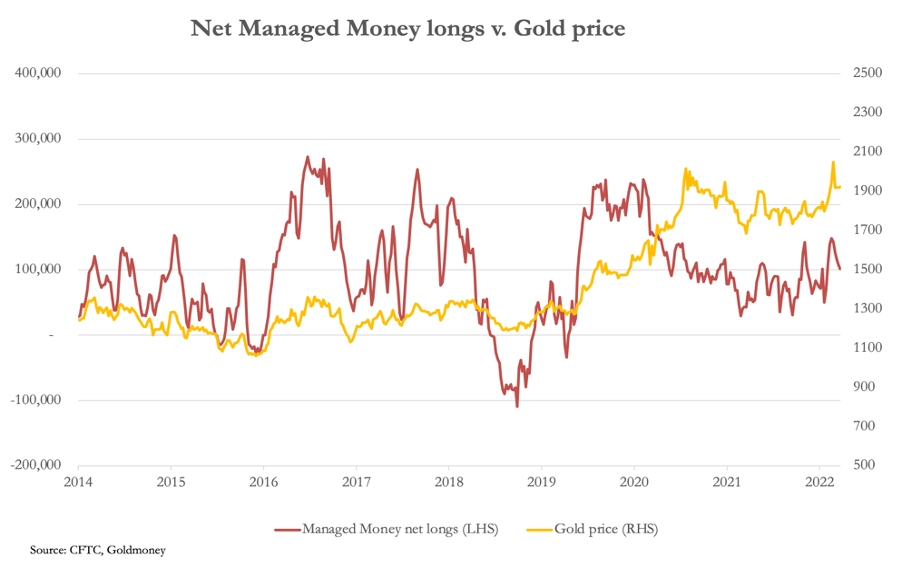 If anything, this chart suggests that net longs are too low relative to the gold price with the gold price advancing despite hedge funds’ net longs being neutral. But the Swaps, which includes the bullion bank traders are being hurt. 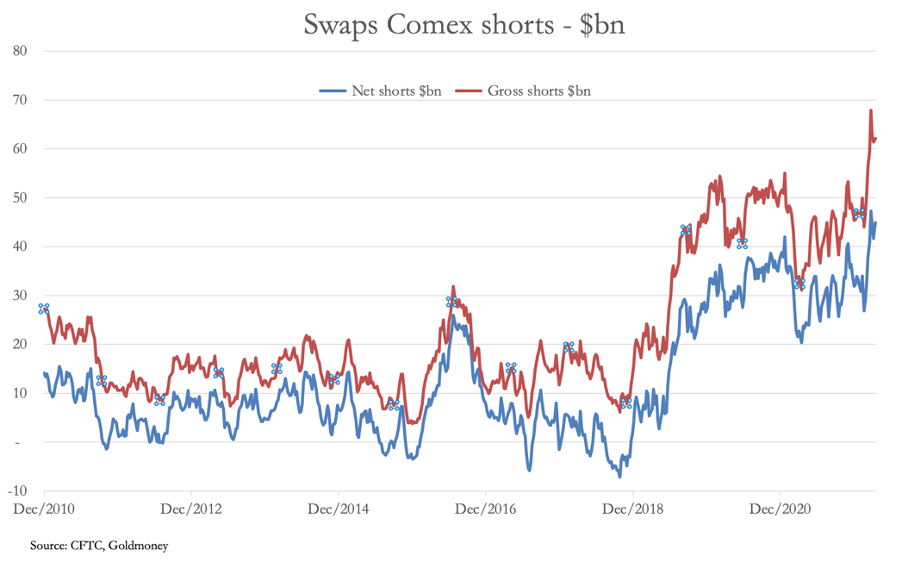 At today’s gold price, this category is net short about $45bn between 17 longs and 24 shorts. So, what’s driving the market?

It is becoming clear that inflation measured by the CPI is now the overriding consideration. Not only that, but with Shanghai closed due to covid thereby extending supply chain disruption and energy prices still being driven higher by sanctions against Russia, it is a racing certainty that CPI inflation is heading for over 10%. At the same time fears of declining economic activity are growing. Clearly, the Fed and other central banks do not want to raise interest rates in this environment, so are way behind the curve. So long as they persist in these policies, currencies will weaken even further in terms of their purchasing power relative to commodities, producer, and consumer prices.

Additionally, if markets end up pricing government debt at far higher yields, the massive financial bubble which has been accumulating since the 1980s will burst, driving financial asset values down. It is likely that policy makers will do all they can to prevent this happening. Indeed, the Bank of Japan has already stated that it will prevent the yield on 10-year JGBs exceeding 0.25%. Consequently, the yen has crashed by nearly 10% against the dollar in the last six weeks.

Not so long ago we were told that rising interest rates were bad for gold. That story is quietly being buried, and it looks like there is an interest rate crisis brewing which should be immensely positive for real money, that is gold.