Market Report: Who is sanctioning whom? 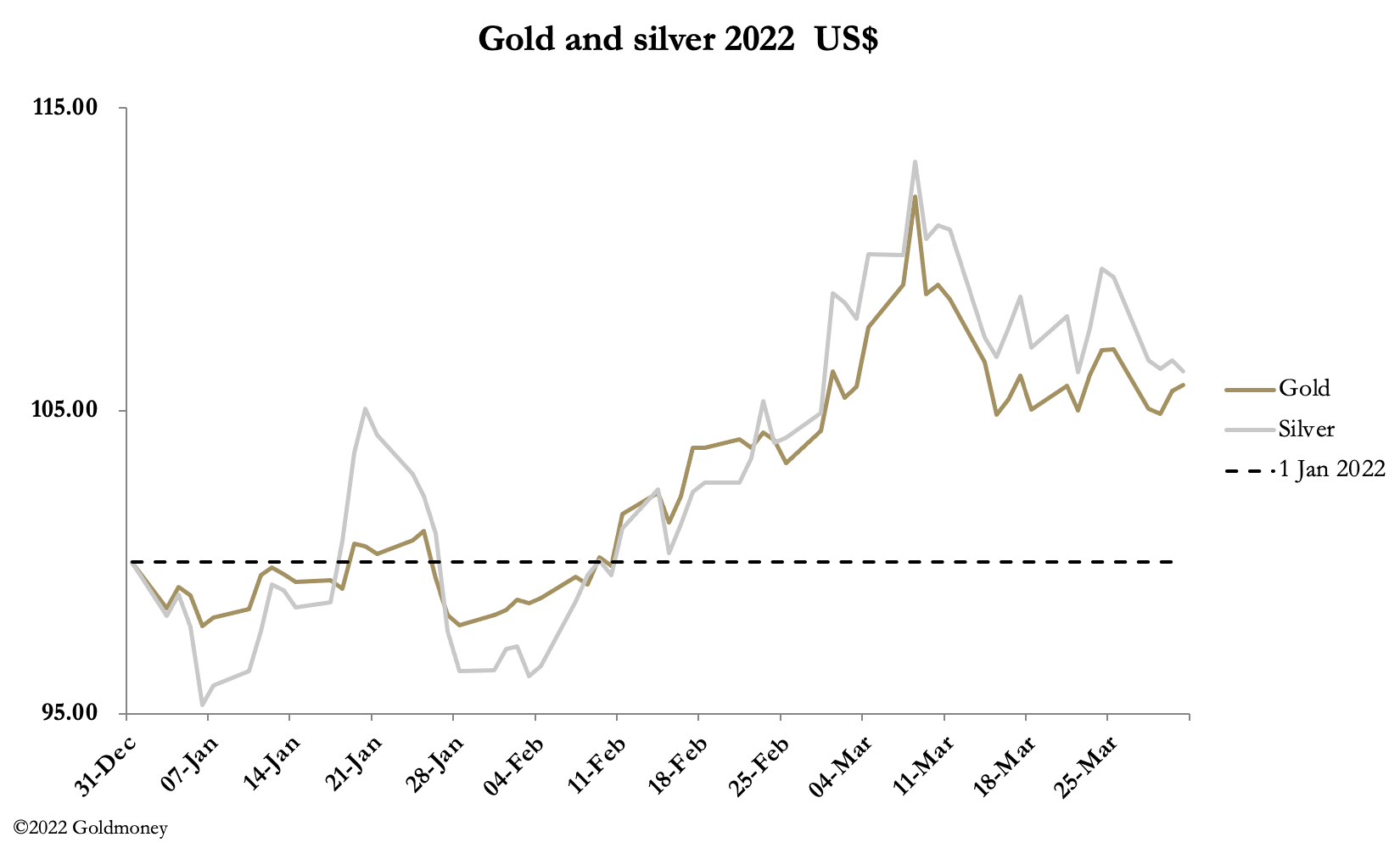 Gold and silver drifted lower on balance this week, seemingly caught in limbo while traders tried to make sense of news developments. In Europe this morning, gold traded at $1935, down $22 from last Friday’s close, and silver was at $24.75, down 73 cents on the week. Comex volumes for gold were moderate to low, and for silver low all week. Gold deliveries yesterday were a staggering 12,491 contracts (1,249,100 ounces, 38.85 tonnes) and silver 647 contracts (3,235,000 ounces, 100.62 tonnes). With bullion scarcity, paper market liquidity continues to be tapped.

Yesterday was the end of the first quarter, an event which combined with earlier option and contract expiries is associated with suppressed prices as bullion bank dealers, who take the short side, book their profits. This is reflected in the decline in open interest. 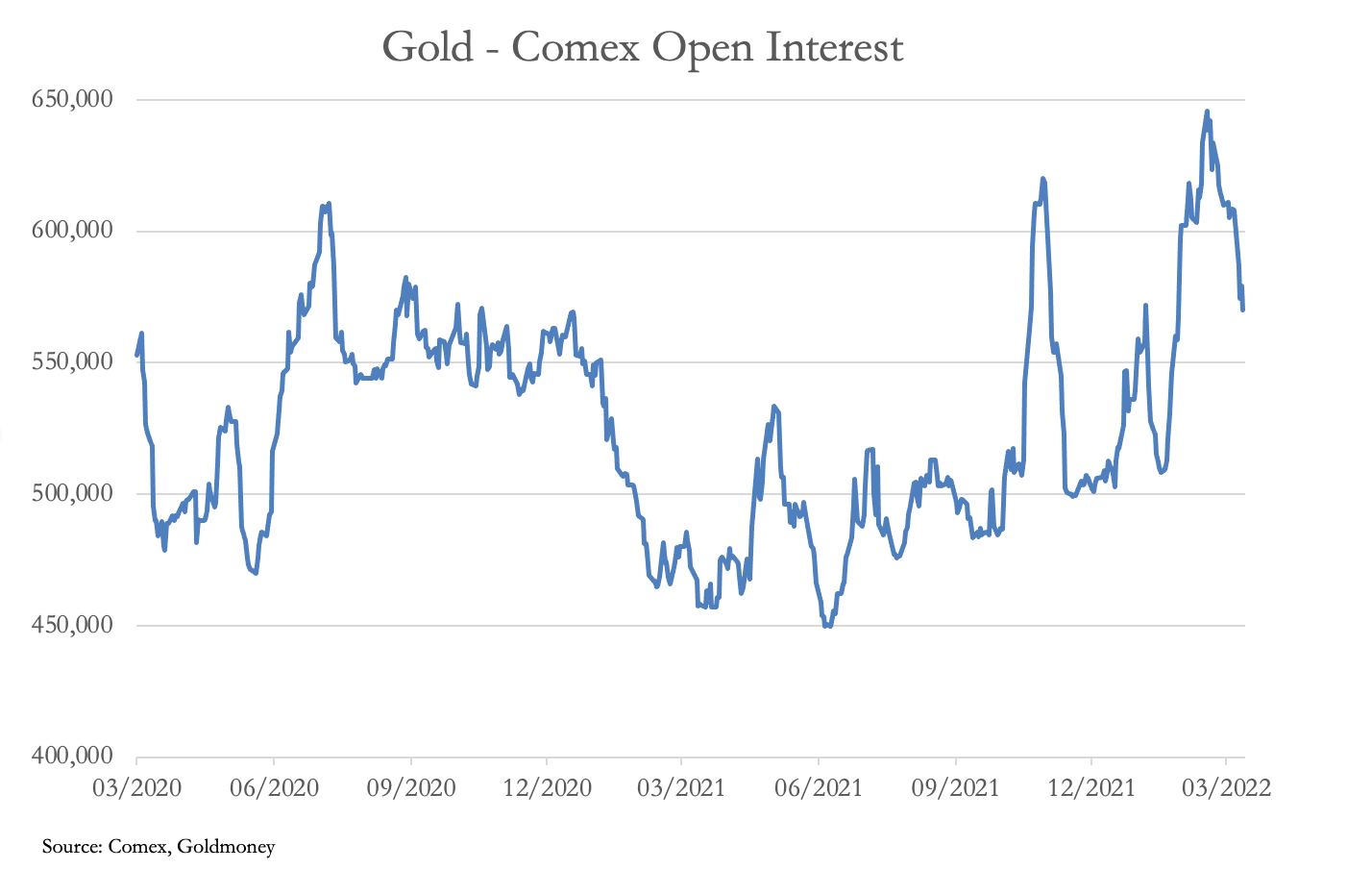 An event occurred this week which market historians might describe as pivotal, not just for gold, but everything else. Russia has finally responded to the West’s sanctions by dividing the world into two categories: friends, which include the likes of China and India and anyone not in the US-NATO camp, and unfriendlies freezing payments. Force majeure clauses are being triggered in supply contracts and the unfriendlies will have to pay for oil and natural gas in roubles. It appears that unfriendlies will have to pay for all other Russian exports in roubles as well.

Separately, Russia’s central bank announced it would buy gold from Russian banks at a fixed RUB5,000 per gramme until end-June. To say analysts are caught unawares is an understatement, and they are scrambling to make sense of it. Crucially, there appears nothing to stop a Russian bank from buying gold in, say, Dubai, if it can acquire the dollars to do so. For inventive bankers, getting round currency sanctions should be easy.

If the arbitrage takes place, the gold price will become attached to the rouble exchange rate. At this morning’s currency rate RUB 5,000 is the equivalent of $61.389 per gramme, against this morning’s market price of $62.229 – a discount of 1.37%. A stronger rouble should take gold with it, so what are the prospects for the rouble?

There is no doubt that the unfriendlies, particularly in the EU, have no alternative but to buy roubles to pay for Russian imports. The move is modelled on the creation of the petrodollar in 1973, when the Saudis (and therefore OPEC) agreed to only accept dollars in payment for oil. It meant that all oil importers had to acquire dollars, which led to the dollar dominating global trade settlements to this day.

The Russian central bank will be able to manage the exchange rate against this new demand, allowing it to reduce interest rates, control imported inflation and remove exchange controls. A controlled rise in the rouble exchange rate is in prospect, which through Russian banks’ arbitrage appears likely to put a further squeeze on low physical bullion stocks in the West and therefore on paper derivative equivalents.

Finally, a look at gold’s technical position, which looks set for a new bull run. 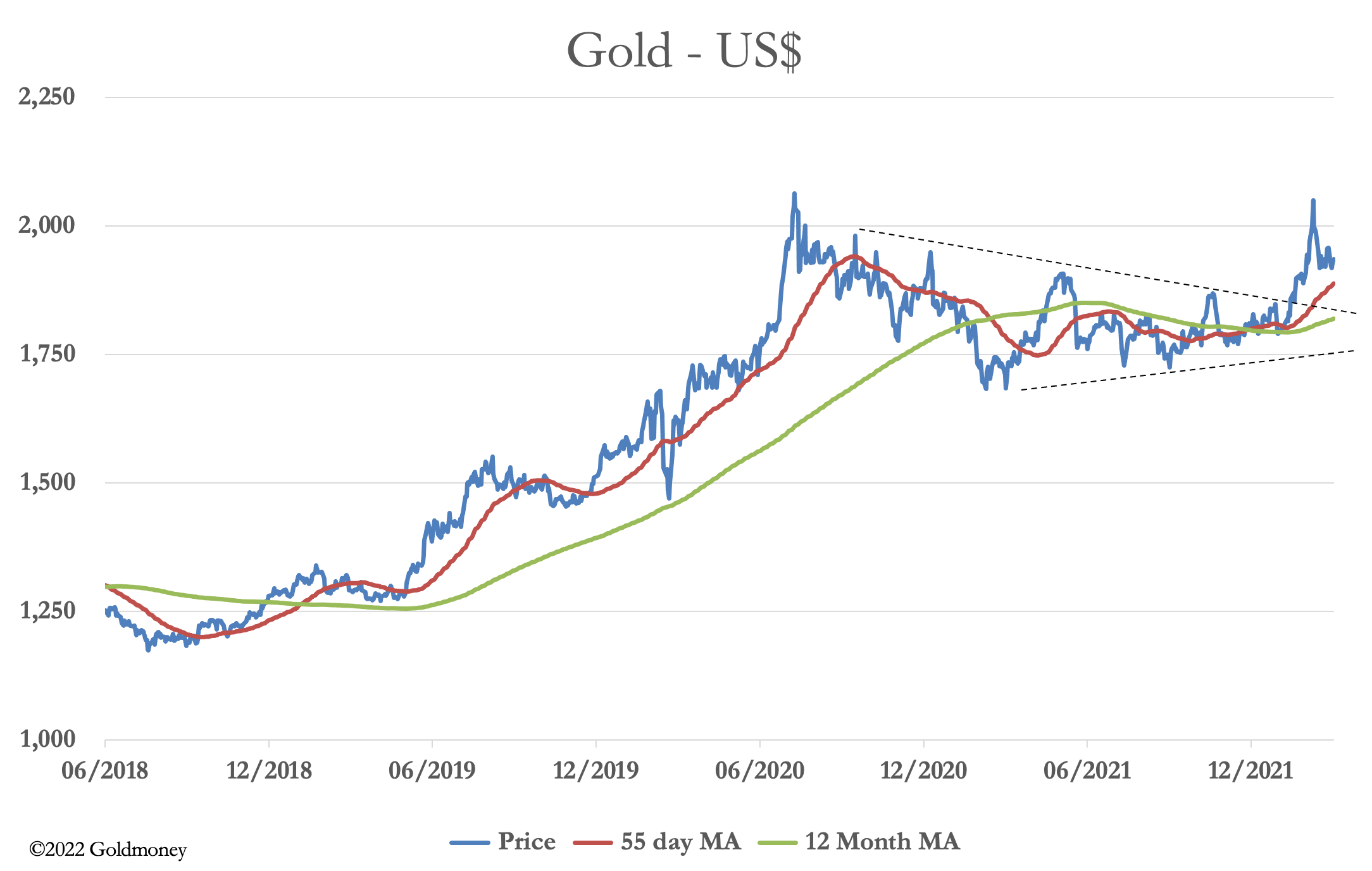