Market Report: US$ breaking down 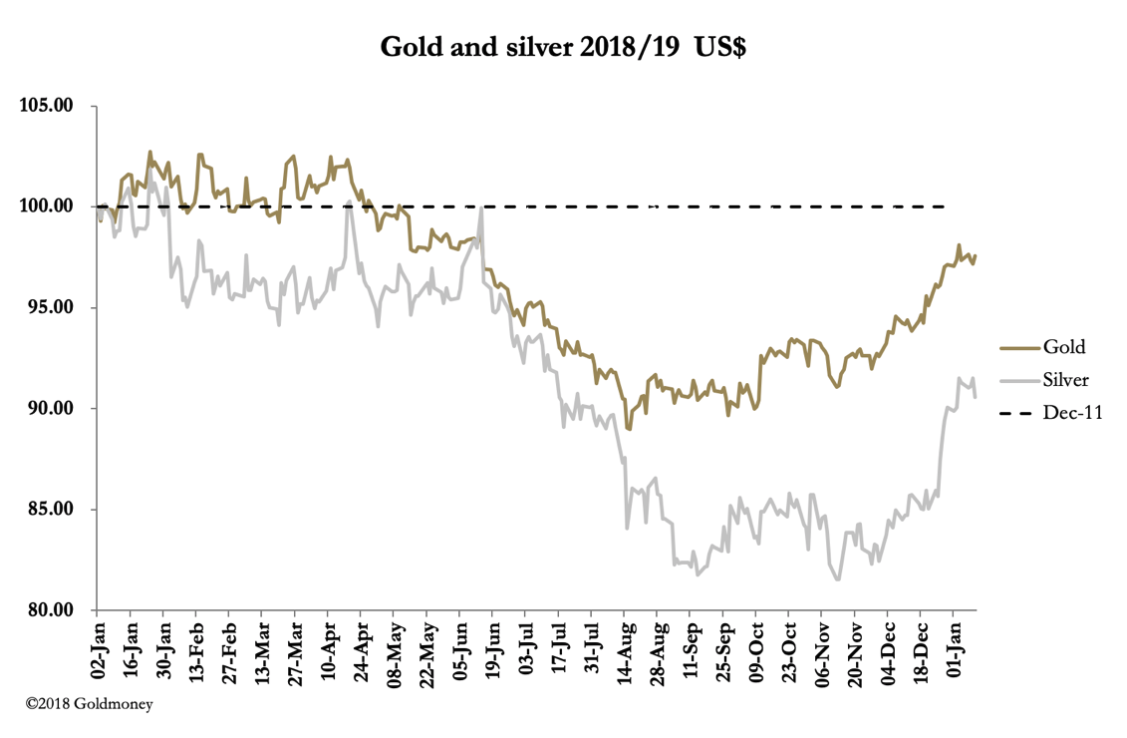 Gold and silver consolidated their recent gains this week, with gold up $7 at $1292.50 in European morning trade today (Friday), and silver unchanged at $15.70. As I pointed out last week there is notional supply of paper gold in the $1290-1300 area. This is shown in our next chart. 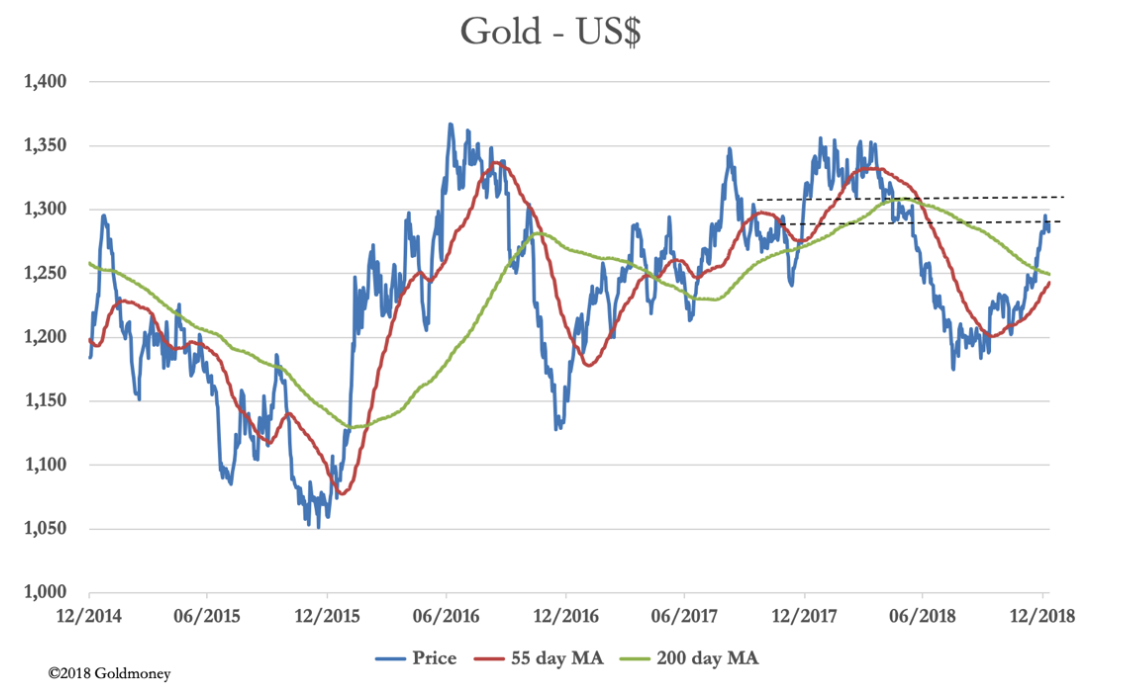 This supply area is approximated by the pecked lines, which combined with the 6% rise since the beginning of December calls for a pause. Meanwhile, a bullish golden cross is forming, whereby the 55-day moving average crosses above the 200-day MA with the price above both. Momentum chasers are certain to turn increasingly optimistic for the medium-term on this development.

Jeff Currie, Goldman Sachs’ gold analyst, is bullish, forecasting a gold price over $1400 in twelve months. This tells us that at least some of the establishment is turning from its persistently pro-fiat anti-gold position, in remarkable contrast to the record net shorts seen only three months ago. Gold also has a short-term restraint with the February Comex contract running off the board, with 266,000 contracts to close in the next fortnight. So far, they have been rolling over without difficulty into April and June, the next active contracts.

This suggests a more positive attitude to gold among traders, but it still seems likely more work will be needed to clear that $1300 level. One good reason for renewed optimism is dollar weakness. The next chart updates the position. 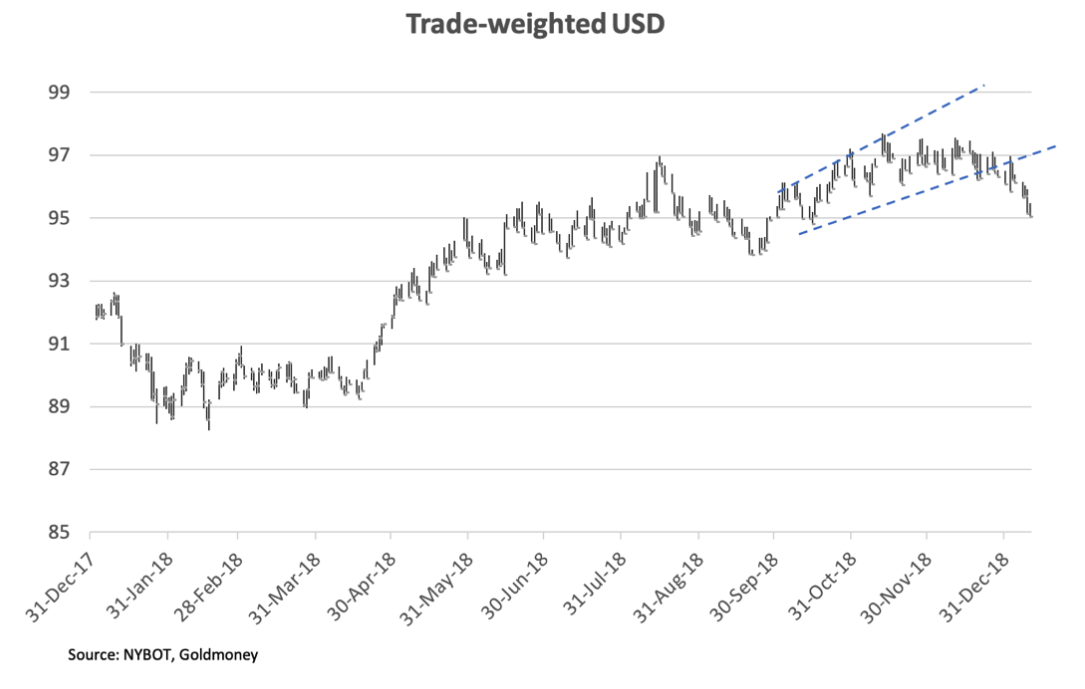 Clearly, the TWI has broken down from a bearish broadening top as shown between the pecked lines. Besides some minor support at the 93-94 level, the TWI looks set to move down to test the lows of a year ago at 88-89. Commentators are suggesting the more dovish tone from the Fed is responsible.

Bearing in mind this index is mostly a reflection of the EUR exchange rate, the dollar must fall significantly against the euro. I argue in yesterday’s Insight that the eurozone is likely to get into deep trouble, so the outlook for the currency is unpredictable. While it is tempting to say the euro will weaken against the dollar if my expectations are valid, it could be that interest rate arbitrageurs are put off by currency volatility, in which case the EUR rate could move higher and the dollar’s TWI down.

Meanwhile, the yuan has strengthened against the dollar by 2.7% in the last thirty days, which given the trade dispute with the US was perhaps unexpected. It does mean Chinese buyers of gold ahead of their New Year are getting a currency windfall. Demand in China is still strong, with deliveries out of the Shanghai Gold Exchange’s vaults in the first eleven months of 2018 totalling 1,867.6 tonnes.

Physical demand by China’s private sector continues apace, and in addition it has become clear recently that the main players in Asia are turning away from the dollar. A significant part of their future reserve plans is to accumulate more gold and to sell the dollar, the effect of which we could see in the coming months.