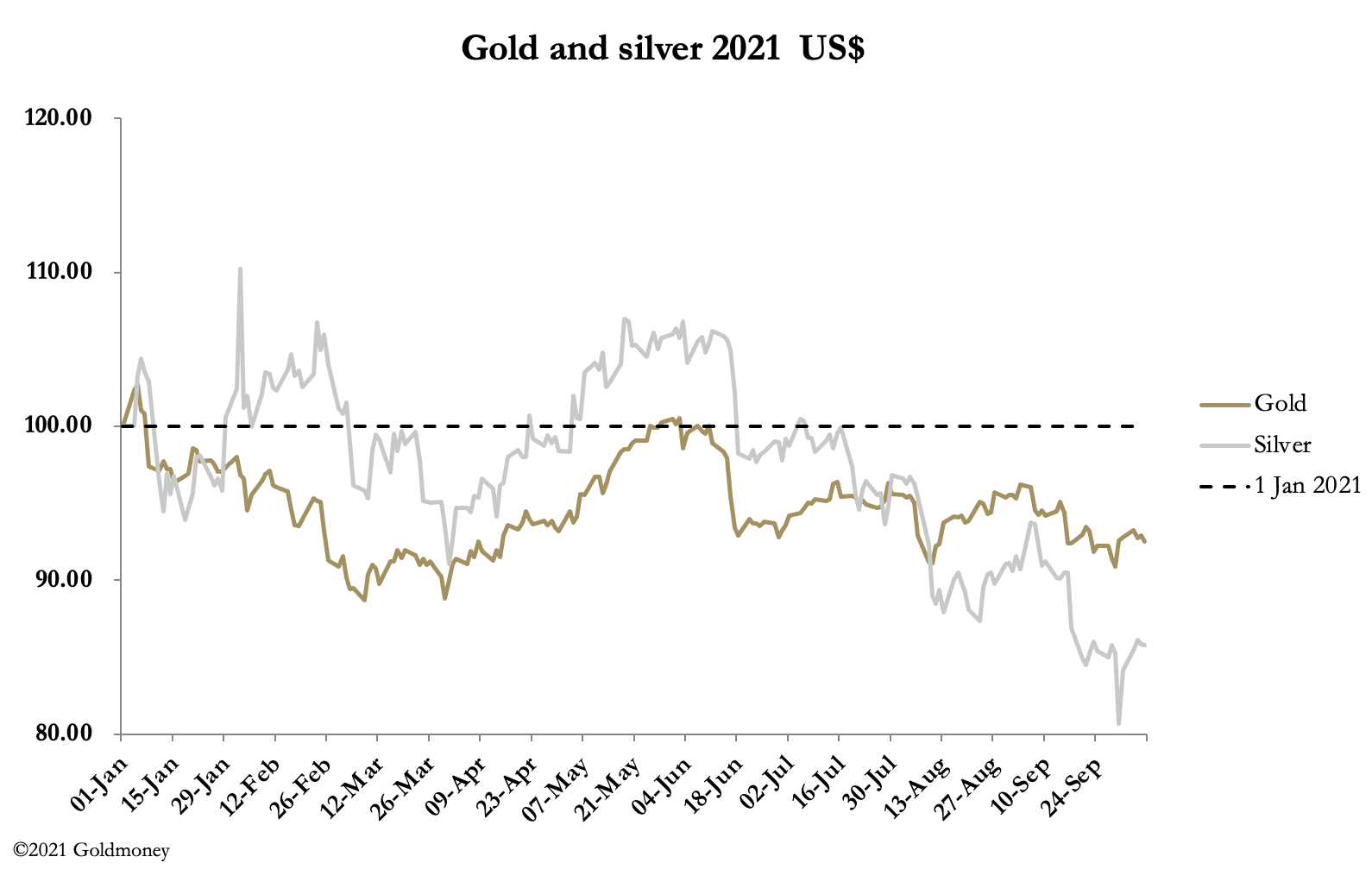 In a week of consolidation gold and silver ended up little changed from last Friday’s close. In European morning trade today, gold was $4 lower at $1757, and silver down 18 cents at $22.50. Trading on Comex was generally quiet, with any price weakness tending to occur early in the trading day with prices rallying in the afternoon. This pattern suggests that bullion banks have an eye to unlocking physical ETF gold stored in London while trying not to increase their short positions on Comex later in the day.
Hedge funds have reduced their net long Comex positions to 30,861 contracts (last COT Report —28 September), as shown in our next chart. 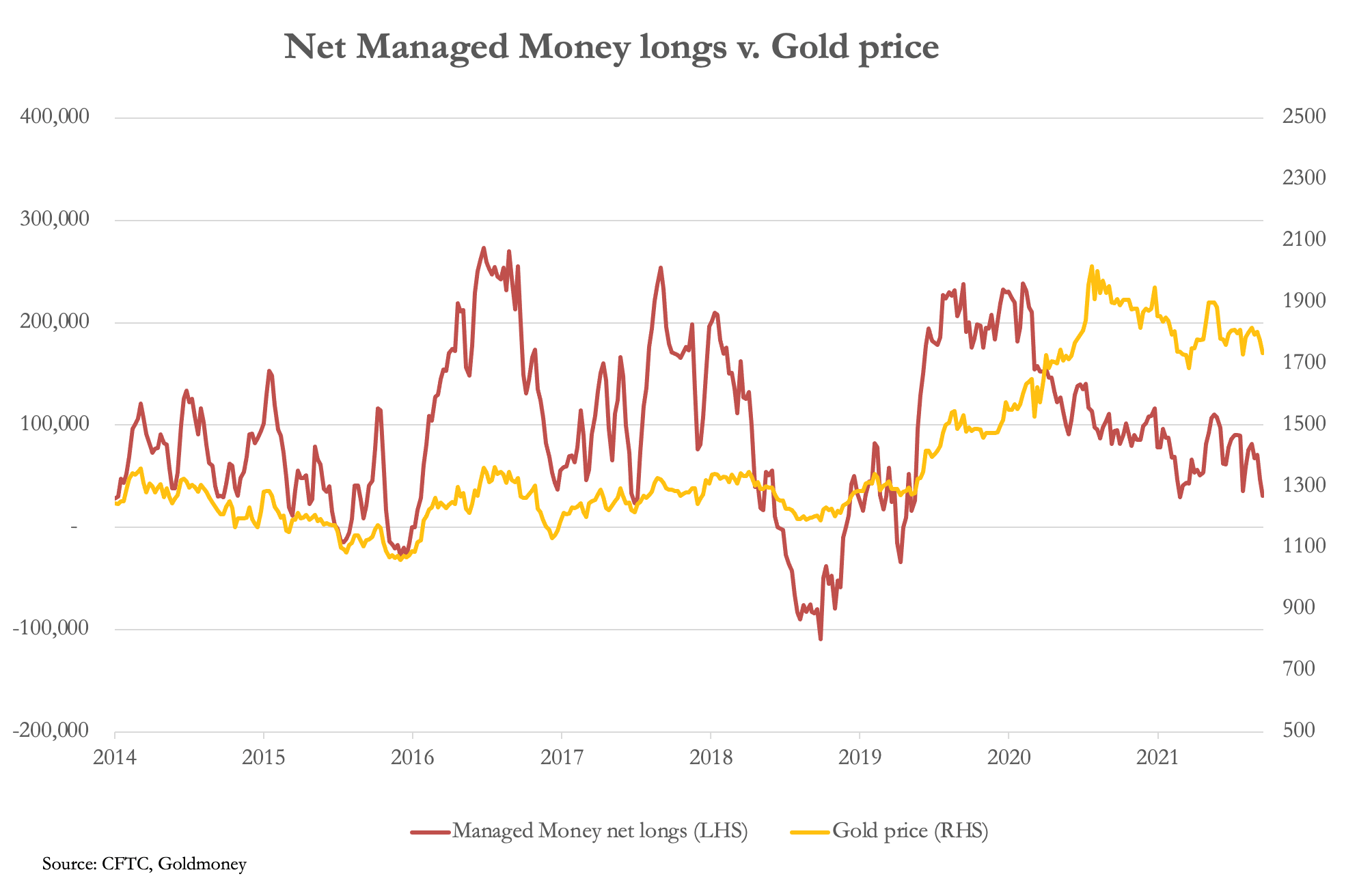 This is about a third of the long-term average net longs, so the current position is oversold. Furthermore, compared with the decline in net longs, since the all-time high in August 2020 the gold price has held up better than the hedge funds’ unwinding would suggest. This relative strength is basically bullish.

Current strength in bitcoin has reignited the debate between it and gold. According to Zerohedge, JPMorgan believes;

Our next chart, which is of bitcoin priced in gold-ounces and of gold priced in US dollars illustrates the relationship. 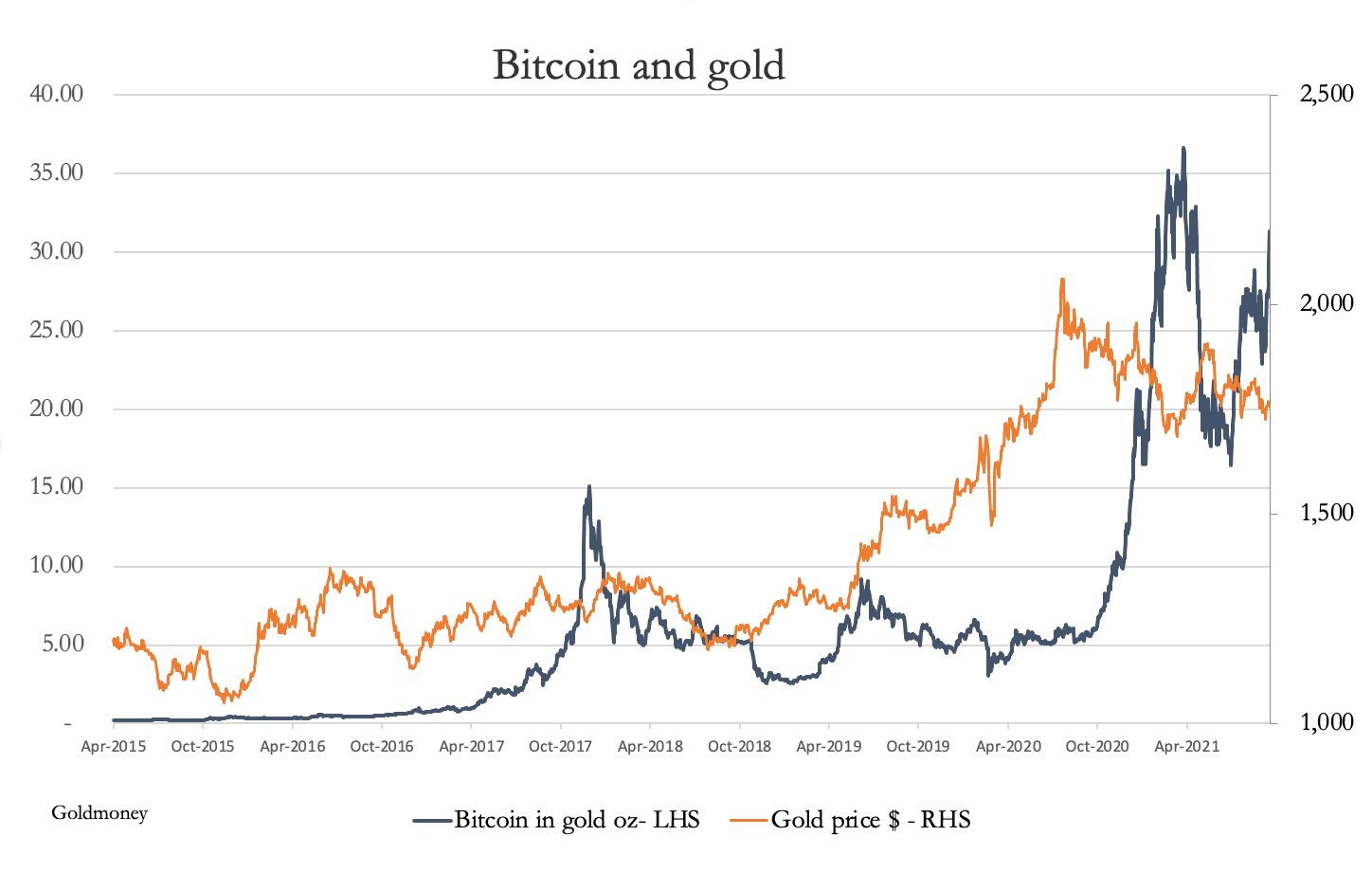 Clearly, bitcoin has outperformed gold. And after its April—July collapse it is doing so again. The easy message is JPMorgan’s, that at a time of increasing price inflation bitcoin is the better hedge. This is being bought into by institutional investors chasing performance instead of acting on reasoned analysis and legitimised by US regulators moving towards regulating cryptos. But the psychology of it and the facts needs to be considered.

There are two obvious factors driving bitcoin. The obvious one is weight of money propelled by investors who have a fear of missing out. The second is that those who have a grasp of fiat money debasement are the millennials who have followed and profited from bitcoin and naturally buy into a technological hedge based on relative rates of issue.

The latter point informs us where we are in terms of public understanding of the consequences of government spending and money supply out of control. The implications and prospects for fiat currencies’ purchasing power is dawning on the millennials who half understand the monetary problem. It has yet to dawn on the wider public, likely to hedge not into bitcoin but into physical gold. And if paper currencies are destroyed or even stabilised, either there will be no price for bitcoin (gold will be the money) or the biggest bubble in the history of speculation will implode.

Chasers of the crypto money mirage would do well to dismiss the hype and inform themselves properly about money. Gold has been true money throughout history, always re-emerging when fiat fails.

No fiat, no electricity, no bitcoin.